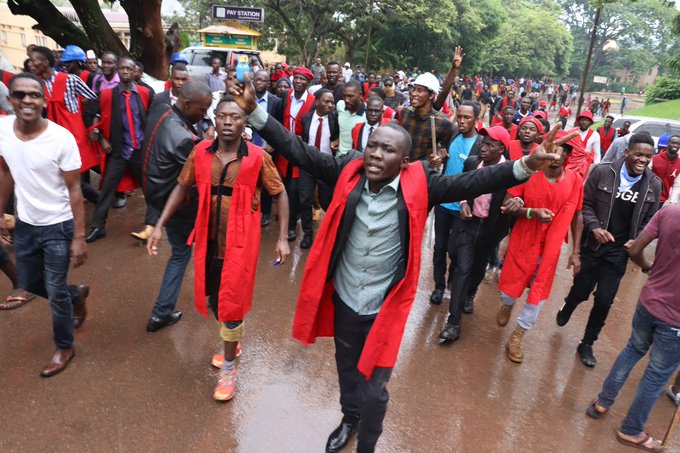 The Minister of Education and First Lady Janet Museveni after three evening raids with horror, violence and arrests. Even revealed deaths has occurred because of the actions made b the Special Force Command, soldiers and Police Force during the raids. Still, the First Lady blame “outside” forces meddling in the student life and “non-students” attending the riots.

This is really rich, this is really insulting and insinuating a lot of things. Reverend Lokodo should teach this Minister a lesson in ethics, because this scriptural usage is bonkers at best. When, she defends the army attacking civilian citizens at night and comes with claims of opposition support. At best, that is not illegal, they are allowed to demonstrate and industrial produce for their own livelihood and student body. Unless everyone supposed to bow-down to the Queen and King like peasants, right?

However, she just shows her ignorance of the pleas of the students with her statement. I have only taken parts of it. Because, discussing it to broadly is not worthy of my time.

“That notwithstanding, I have learned with dismay that some of the people involved in this “demonstration” are not students from Makerere University or any other university for that matter. They are people who have made it there way of life to be paid to joint any riot wherever it is happening. Apparently, the political opposition in this country – who are well funded “somehow” by some “unknown sources” – find it useful to pay unemployed young people to riot wherever and whenever they believe they see a viable opportunity” (Janet Museveni, 29.10.2019).

“For these vulnerable young people and the adults who pay them it seems as if nothing else matters – not these young people whose minds are distorted early in life; not the fact that the resources used to replace destroyed University property could have solved another problem somewhere; not the consideration that this is very wrong instruction to students of how problems are solved in life without confrontation and destruction of life and property. Nothing constructive or educational at all is achieved. Instead, the public is misled through there skewed propaganda as to what is really happening” (Janet Museveni, 29.10.2019).

The insults to injury to the side. Is that she has baseless claims, where she knows that the students and the Guild President is behind it. The raids yesterday was after 7 more ring leaders, where the live-bullets, tear-gas and violence occurred again. Just as the other nights, one has passed on from the violence done to her. She died in the hospital after the treatment and the suffering, which was not enough. After all, of that, she continues shifting blame.

The Minister of Education speaks of nothing constructive being made. Well, the state haven’t produced anything constructive or cared for the students life itself, when they raid with soldiers at night. When they barrage and besiege the campus with an army barrack. She speaks of knowledge, but this sort of action speaks of oppression and autocratic behaviour.

As this is happening, three journalists are arrested for reporting on campus. Two journalists was kicked-out by the students for pushing the state agenda. Lastly, the realities remain, that the state investigate the students and the funding of the demonstrations, but not looking in the hurt they have put the student through the last two weeks. It is outrageous and no-one want to see their kids live through this. No one in his or her right mind will defend making the army invade a campus, right?

Still, she was very silent about that, but targeting the students for their activity. Because, they are all to blame. They ordered the soldiers, they ordered the SFC, they bought the tear-gas and they wanted to see the live-bullets hit the halls at night. Let’s be serious, she cannot be this shallow, but then again. We know from the past that she got thin-skin and lack moral codes, that’s why she uses the bible as she see fit. Even when defending the indefensible. Peace.