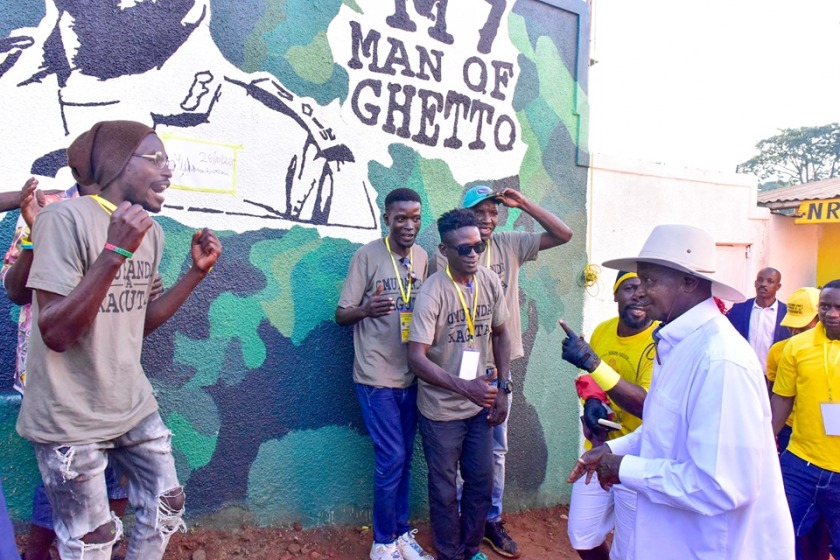 “We got our leaders too but where they lead us ?

Do they leave us or they see it through?

Our shit is next level

We see the scheme ahead of the General Election of 2021. The focus will be on the ghettos, the slums and the areas close to home of Robert Kyagulanyi aka Bobi Wine. Just like he has now a Presidential Advisor for Kampala Affairs and the Ghetto Youth, and there is another one in the making too. Therefore, his focus is there now.

However, when it’s coming to President Yoweri Kaguta Museveni, I feel these bars are more fitting for him: “I’m on the porch like a slummy Ralph Lauren model” (Yelawolf – ‘Daylight’ from the LP Trial By Fire, 2017).

His not a gangster, a slum-dweller, someone who has cared for the ghettos or slums of Kampala. No, his now a poser and a model. Like the one mentioned by Yelawolf. That is who the President is. His starting all sorts of initiatives, but it only happens because his preparing for 2021. There are no other reasons for it.

That’s why he did this today:

“Launched the NRM empowerment office for youth living and working in the areas of Kibuye and Katwe. The office will be a registration point for SACCOs and will make it easy for us to support the youth in their different productive groups” (Museveni, 27.10.2019).

We can lie to ourselves, but he hasn’t really been initiating much. He dropped 100 millions shillings last year too. But that is about it and this is a continuation of it. Instead of finding proper remedy his giving away charity and hoping it sticks. There is no difference between this and sudden drop from an NGO. As the NRM might open an office, but what is the budget and mandate? Who does it answer to? Is it under the State House, KCCA or the City Hall? Will they answer to the needs of the Katwe Council or is that not important?

Since, if the President did care or wasn’t only a visitor doing photo-ops and photo-bombing in the area. He would sincerely try to involve all the stakeholders and check their needs. Instead of patching the hurt by dropping a few dimes, hoping that would save someone’s day. Because, that’s how it looks.

We can anticipate that the President will do similar things now in Kamwokya, Kalerwe, Kisenyi and elsewhere. That is if he cares, but right now his just tasting the grounds and trying to eat of the spoils. He is dropping small currency and hoping to triple it in support. To think otherwise is naive at this point. The President is a screwed politician and to not think this is calculated is to think to well of the old man.

Therefore, he will go all ghetto. He will even hum the tunes of Elvis if he got too, with the sounds of “And his hunger burns

So he starts to roam the streets at night

And he learns how to steal

And he learns how to fight

The only reasons he sings these tunes now is because of Bobi Wine. There is nothing else too it. He might soon make an Ghetto MP or even a Ghetto Ministry. Just to show that he cares, even if he never really has. Unless donors has paid for programs and ensured shelters. Some figments of micro-loans schemes and such. There aren’t much proof of care or change. Only, that his now boosting it up ahead of a up-coming election. That is the sad reality.

The President has had the time to fix and find avenues to make change in over 3 decades, 33 years and still not achieved anything. From 1986 until present day, he has had the time and ability to do something. But he hasn’t. This is a generation left behind by him and his accepted that. Until, the rising starlet and popular politician Bobi Wine MP showed up. Than he had to change the guards and move.

Well, to quote the old man: “The power stays in the hands of the people. . . . I don’t see what opponents are so panicky about” – Yoweri Kaguta Museveni in 1995. That might me 24 years ago. But still a friendly reminder, that the Poeple Power is powerful and that is why he suddenly cares about the slums/ghettos. Peace.