Opinion: Trump shouldn’t throw shade at Comey, his guilty of leaking himself! 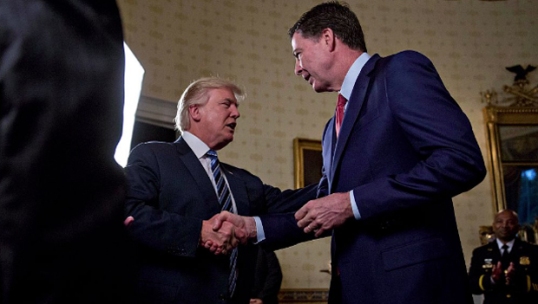 ““I will tell you this — Russia, if you’re listening, I hope you’re able to find the 30,000 emails that are missing. I think you will probably be rewarded mightily by our press,” the GOP presidential nominee said at a press conference in Miami” (Rebecca Shabad – ‘Donald Trump: I hope Russia finds Hillary Clinton’s emails’ 27.07.2016, CBS News).

Well, I am just tired of bullshit. It is so much of it. As the OIG report was released on the leaking of the memo’s of the former FBI Director James Comey to the New York Times. However, what is more striking to me, that the OIG isn’t criminalizing it. Is that the President and his White House Team is attacking Comey. While, the President and others has leaked confidential information to Russian associates.

Therefore, the Trump administration should look into its own actions and back-channels towards Kremlin. Because, there is enough phone-calls, no-no meetings at G-20 meeting in Finland and so-on. Also, enough secretive meetings to gather knowledge of the political enemy during the campaign to Presidential Election of 2016.

That is why, Trump shouldn’t throw shade on the one memo Comey leaked parts, which was later classified. This has not been investigated, however, Comey has been and its ended this month. But first show what Trump has done himself. Just a little bit.

“Vanity Fair reported on Wednesday that a top American spy told Israeli intelligence officials during a meeting at CIA headquarters in Langley, Virginia, a few weeks before Trump’s inauguration that US intelligence believed Russian President Vladimir Putin had “leverages of pressure” over Trump” (…) “Trump met with Lavrov and Kislyak in the Oval Office on May 10, the day after he fired James Comey as FBI director. Trump told the Russians that he had “faced great pressure” as a result of the investigation into Russia’s interference in the 2016 US election — and whether the Trump campaign colluded with Moscow — that Comey was leading, calling him “crazy” and “a real nut job.”” (…) “Trump then reportedly described the broad outlines of the Israeli intelligence and named the Syrian city in which it was gathered” (Eliza Relman – ‘Bombshell report reveals new details about Trump’s Oval Office meeting with Russians after he fired Comey’ 24.11.2017).

“As for the results of Foreign Minister Lavrov’s visit to the United States and his meeting with President Trump, we assess the results highly. This was the first visit, a return visit by our foreign minister, after we received US Secretary of State Tillerson here in Moscow. This is normal and natural international practice. At the same time, however, we see the growing political schizophrenia in the United States. There is no other way I can explain the accusations against the current president that he handed whichever secrets over to Lavrov. Incidentally, I spoke with him [Lavrov] today about this matter, and I will have to give him a ticking off for not sharing these secrets with me. Not with me, nor with our intelligence officials. This was really not good of him at all” (President of Russia – ‘Press statements and answers to journalists’ questions following Russian-Italian talks’ 17.03.2017).

So, when you see these statements. You know something is up. You know that Trump is up to something. This is just a snippet of the connections. Because, there is reasons why there is printed books about the Russian connections with the Trump Campaign. Also, the previous business transactions with Russians too. Therefore, there is no need to add to that. But, when the President Tweet like he does and his White House attack Comey. The White House should also reflect into what they did with leaking intelligence to the Russian themselves in 2017.

Because, this is what OIG said in its report:

“At the time, the OIG also was aware of Comey’s June 8, 2017 congressional testimony that he had authorized a friend (who was also one of his personal attorneys) to provide the contents of one of the Memos to a reporter for The New York Times. Upon completing our investigation, we provided our factual findings to the Department for a prosecutorial decision regarding Comey’s conduct. See 5 U.S.C.A. App. 3 § 4(d). After reviewing the matter, the Department declined prosecution” (OIG – ‘Report of Investigation of Former Federal Bureau of Investigation Director James Comey’s Disclosure of Sensitive Investigative Information and Handling of Certain Memoranda’ August 2019).

Therefore, when the President and his White House is continuing their campaign to tarnish Comey. They are clearly not looking to what they did themselves. Because the Memo’s was retroactively turned into classified documents. Comey did act wrong and keep them in counsel wrong, as protocol and status of the documents, which belongs to the FBI as long as your an employee of the agency.

So, Comey is not righteous, but the proof is that he will not be charged for this. Because, there is no case in the first place. If there was one, the FBI and OIG would file one. However, they don’t, but why will not Trump and his White House do the same investigation into their own leakages and secret meetings with Putin. If Trump himself has leaked sensitive classified intelligence to Russians. If so, isn’t that wrong?

This is not even leaking a private memo, before its classified and secret by the FBI. But, Trump heard intelligence and later told it to Russians like nothing. That has gone out of the window. Like a forgotten tale of old-ages. That is why I am so furious about the nonsense of calling Comey a criminal.

When the biggest culprit is already in office and having the executive role of government. That his running around like crazy, calling everyone criminal, while his the biggest one himself and he knows it. But his acting like a saint, but we know otherwise. Peace.