The Leopards Anus is touchy about “Project Muhoozi” 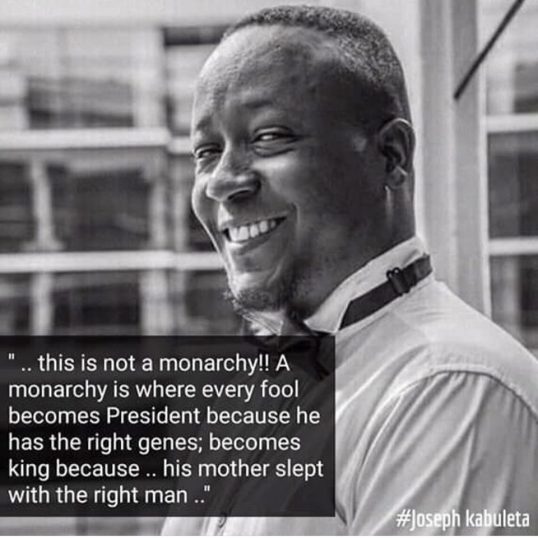 “The big question for Ugandans is: How and when are they planning to make this transition?

The First Son is already being sent on foreign missions on behalf of his father and is meeting ambassadors and dignitaries, and tweeting about it. Maybe the Godfather is planning to go into semi-retirement after rigging the 2021 elections and take on an advisory role as his son runs the Family Business called Uganda Limited. Or maybe, just maybe, the transition happens within NRM and the country adopts a Parliamentary System in which the party with the most elected legislators takes the presidency” (Joseph Kabuleta – ‘MAFIA EMPIRE AND THE TRANSITION (Joseph Kabuleta’s Weekly Rant RETURNS) – 08.07.2019).

Today, the Kampala Metropolitan Police arrested today the former New Vision Journalist and now Paster Joseph Kabuleta, as he has posted stories and texts on Facebook ranting about Project Muhoozi and the family of Museveni.

The Pastor is supposed to violate the Computer Misuse Act of 2011, article 25: “Offensive communication. Any person who willfully and repeatedly uses electronic communication to disturb or attempts to disturb the peace, quiet or right of privacy of any person with no purpose of legitimate communication whether or not a conversation ensues commits a misdemeanor and is liable on conviction to a fine not exceeding twenty four currency points or imprisonment not exceeding one year or both” (Computer Misuse Act 2011).

The authorities around the Leopards Anus, the Bean-Weevils of the world is working on overdrive. They are not lacking in action, in concern of the Royal family and their preposterous egos. The pastor might be wrong in what his writing, but that shouldn’t be a criminal offence to write about the acts of the Presidential family.

If what the Pastor is saying on Social Media is wrong and false information, could the UPF decipher the messages made online and tell what is initially wrong? Since the Press Release/Statement didn’t clarify it.

What I wonder about those rants from the self-styled pastor disturbed the peace or even attempted it with what he wrote on Social Media. This is just utter nonsense. The President and his rants in speeches are creating more havoc, than any of the posts of the City Pastor.

The man of very powerful words and descriptions about others. Should have the capacity to understand that people write bad about him too. The authorities need to show some gravitas … but that ship has sailed. Not that this government is balancing the boat, they are sinking it instead of securing the public. That is what they are doing, when they are arresting someone for rants like this.

This shows that anyone who writes questionable texts about the Museveni family will get into trouble. That is what the Republic is proud of and what it does to its citizens. That the state might disagree with what he wrote is whole other subject. They could send Ofwono Opondo, Andrew Mwenda and the whole New Vision to dismantle the texts, instead they are just arresting man. Using a code take away his freedom and liberty to have a free speech. Peace.