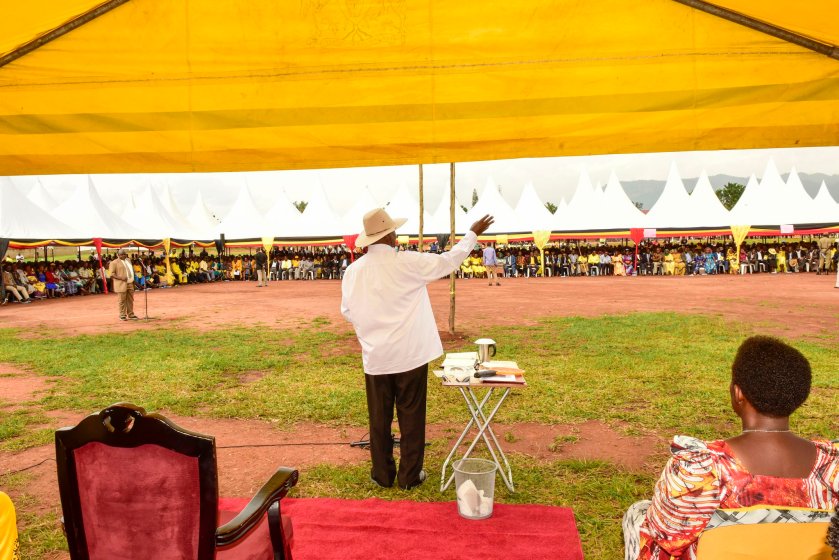 Well, the Museveni Wealth Creation Tour of 2019 is continuing and the stories, the endless endorsements in every creek, corner and by everyone breathing is there. I am anticipating a vote for the almighty by the association of goats, wild boars and guinea pigs by the end of next month.

President Yoweri Kaguta Museveni is preparing for 2021, but cannot he just start to do so for the 2026 or the next after that? Since his already doling money and asking for favours like he always do. The President can offer more City Statuses and create more districts. So, that we all can be confused and also the Electoral Commission, so that it cannot see the difference between a previous sub-county and the new district in Kaabong. That is just what is up.

The National Resistance Movement and Government of Uganda, acts like this the new normal. That the President is running around like it is no tomorrow, even when the EC have told that no one should campaign before the Elections Road Map, which is a saga in itself. Not that Bosco or Jajja listens, but we couldn’t expect that from a man with advanced age. These people usually doesn’t listen to younger folks, but gives them lectures. Just like this president does all the time.

That is why the NRM, if it was honest, if it was sincere, would already endorse Museveni for 2026. Even if it many years in advance. Well, 2019 is only two years in advance of the General Election of 2021 and by this count its only 7 years ahead. A little over one term and a bit. Just like it’s a bit and then its polls again.

Well, we know this will not happen, because that would be foolish. Even if it foolish to have the same sole candidate, the same flag-bearer as chairman for 33 years and counting. Well, his the guiding star, the only one close to God and the only one with an vision. So, forgive me for not understanding his place on planet earth. No one can pass his being, his position nor his grace. That is why his the eternal fountain of honour, the one mere mortals only shall ask favours from.

Therefore, if the mere mortals are wise, they could start endorsing him for 2026 to ensure and show loyalty 7 years in advance. That will show the world, the district, the sub-county and their baby mama, that they are genuine supporters of the President. Not like these other fools, who only pledge two years in advance. The people had better show support and now, as they need to get the golden touch, the vision and enlightenment from his almighty now.

No time to throw away. Time to do it now. Peace.