The man behind the Arua Stone is charged, but why not drop charges against “Arua 33” and MPs? 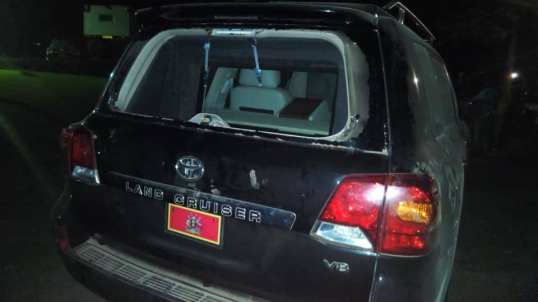 There been plenty of charges, gathering of evidence, even arms and bullets discharged. Still, there been no case, no profile and no verdict on the People Power MPs nor their supporters. An almighty and powerful Arua Stone attacked the Presidential Convoy, which have never surfaced, while no one has to answer for the driver of Bobi Wine death. Until today, someone has to answer for the stones hitting the convoy, but the others are still in legal jeopardy.

This is 311 days, 10 months and 7 days. NBS Television reports: “A 70-year-old man has been arrested in Arua for allegedly stoning President Museveni’s car and smashing its rear door glass on 13th August 2018. Omar Risasi was summoned on Tuesday to make a statement and later detained” (NBS Television, 20.06.2019).

This should mean that the charges against the Kyadondo MP Robert Kyagulanyi, Francis Zaake MP and others should be dropped, since the authorities have found an culprit. Which isn’t any of the high profile or any of the Arua 33.

Since, the charges against the ones are still viable, the pending trail is still on-going and the evidence collected against them are still in Arua. Therefore, the UPF and the authorities are still acting as the Opposition are the ones behind it. Even if they have now a new suspect and even detained a whole different person for the crimes against the President. We are now also seeing that the destruction of a luggage car of the President is more valuable, than the life of an citizen, the driver who got killed during the same day. Which still isn’t investigated or even cared for, his life is without value in the sense of the authorities.

Even with all of this, we are learning the values of this government. AS they are persisting to assault the freedoms of people, take people for granted and not dropping charges, even as the discovery and finding evidence doesn’t pull way against the ones the state wants to indict. The NRM and the government are looking foolish, just like the stories about that window.

Seems like they just found a character they could depose and suspect after ten months, instead of actually trying to find the ones breaking the glass. Because, the windows of that Presidential Car was broken perfectly without any damage of the paint, nor any significant damage on the rest of the car. Like the tinted metal could manage everything, while the window could just give way.

This seems like a fishy move, but if it was believable, the state would have dropped charges against the Arua 33 and the MPs in question. Alas, they are not doing that, so the political motivated investigation and charges are still alive and living colour. Peace.