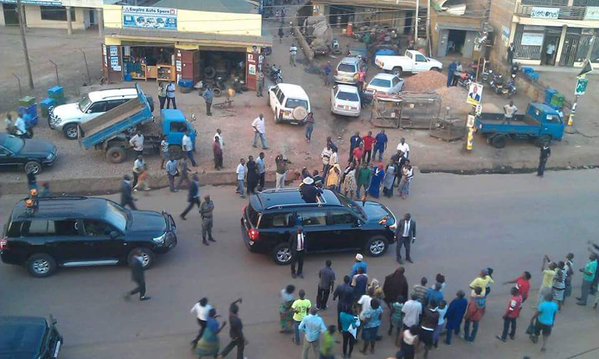 I wonder, this is an experiment, what if the Public Order Management Act was measured in way, where it didn’t hurt the opposition or any dissidents of the government, the President and the National Resistance Movement, but instead went directly and worked against them. I know, its impossible at this point of time, but that is why this an example. An example that has been running in my mind all day.

Let’s say President Yoweri Kaguta Museveni was stopping in a roundabout in the middle of Kampala or even at Owino Market without any prior notification to the authorities. Where he would cease the ordinary life and people would congregate around his Toyato Land Cruiser, but also around the convoy of Special Force Command (SFC) and so-on. Still, because he didn’t apply to be there and hold this meeting.

The authorities would than be sanctioned to send the Police Force, the Residential District Commander together with the Regional Police Commander and the Kampala Metropolitan Police had to intervene. They could even send the Flying Squad there to stop the crowds to gather around the President. Arrest the “ring-leaders”, the people who he was planning to meet. Seal of the venues and tear-gas the crowds. Even put the President in the back of the black-van and drive him back to Okello House. Where he would be in House-Arrest until he followed the Police Order and didn’t incite violence. As he did on that day without notification to have a meeting with random people on the streets of Kampala.

In the same fashion as the National Resistance Movement was planning to hold a Conference and Leadership Training at Kyankwanzi. The Party would have to inform about the planned scheduled program, about the media meetings and the addresses, where the press is supposed to participate at the venue. Where the Police Force would swiftly deny entry because they don’t have manpower to keep the NRM safe or the public. As the NRM would still go ahead on their own property, the Police Force would have to seal of the venue, arrest Secretary General Justine Kasule Lumumba, Prime Minister Ruhakana Rugunda and Dr. Tanga Odoi. As they are parts of this, others that might be picked for rowdy behaviour and inciting violence would be Frank Tumbewaze, Ofwono Opondo, Kahinda Otafiire and Maj. Gen. Matayo Kyaligonza. All of them would be behind bars, awaiting trials for unknown alleged circumstances and the state awaiting to produce the evidence of it.

As those circumstances and contexts seems fine and dandy. There are others, that would seem fitting too. Since the NRM likes to ferry crowds in and around election times. Let say the NRM went around with their gadgets, their little soaps, foods and thousand shillings notes to the villages,as the NRM Village Projects always appear on the Campaign Trail of the Party.

As your playing that in your mind, as the NRM are travelling in the deep villages of Moroto or Adjumani. As the NRM Buses are ferrying crowds to the venues of the nearby stadiums. Where the President, his musicians and the SFC is in and about. The Police Force are coming with their mambas, arresting the coordinators of the Campaign. The driver of the President is taken to unknown location. His Land Cruiser is towed while he is still in it. The shocked NRM Party are following and trying to block the Police from doing this. While Secretary General Lumumba is trying to alarm the press. The NBS and NTV journalists following the Campaign Convoy is arrested and heading by another police van to Arua. The President is landing at the Moroto Magistrate Court, where his charged quickly before his airlifted to Luzira Maximum Security Prison. While the rest of the Campaign Team is either trying to get detained activists out of prison in Moroto Military Prison or awaiting trial themselves. Since, they have all broken the peace and public order by ferrying the crowds to the venue. A venue they hadn’t the clearance of the Police or the Police didn’t care about the notification and stopped it anyhow.

This was just three random scenarios. Very real scenarios, which the Opposition meets every day and all the time. Especially, when trying to gather or do political work. They cannot manage to do it, without the police intervening or being in the way of their work. The Opposition, if they try, they end up house-arrested, detained or charged with a crime. Even if the only thing they tried to do, was to actually do party work.

So, when the likes of Frank Tumwebaze saying the Police have made the Opposition heroes. Well, the Police have made them felons and outlaws, by just doing their duty and to be the checks and balances in the system. In a system that monitor, control and charge them, any time they can. This is the system that is built around the Public Order Management Act, as the Opposition has to beg to gather and do political work. Which is not a given, because the Police can use any reason or any excuse not too. That is just the way it is, but the NRM can do whatever, since the President and NRM has the Police and the Army. That is why the President can make a meeting without any form of notification and doesn’t need to follow the POMA. Even if he should, because he shouldn’t be above the law, but actually abide to it. Like everyone else. Peace.