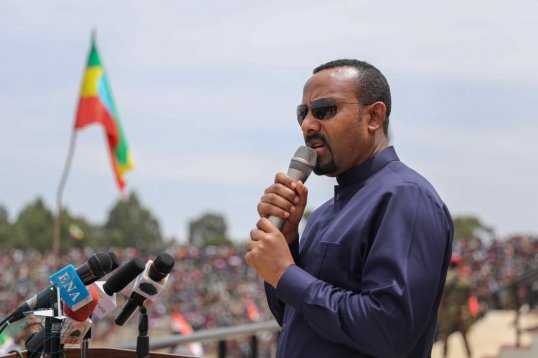 In Addis Ababa, there must be several of the loyalist in and around Prime Minister Ahmed Ali Abiy has come out with statement and wish for all parties of the Coalition of Ethiopian People’s Revolutionary Defence Force(EPRDF), which is a political coalition made out of Tigray People’s Liberation Front (TPLF), Oromo Democratic Party (ODP), Amhara Democratic Party (ADP) and the Southern Ethiopian People’s Democratic Movement (SEPDM). All of these are working together, even if the Woyane or the TPLF have had the upper-hand in the coalition. This is well-known and with the OPD at the helm. That has still not stopped.

This is why, the current stalemate and the issues within the Federal Democratic Republic becomes more dire. As the political achievements are put into questions, as the Prime Minister knows how to say the right things, but doesn’t act upon it. What is striking and worrying is the internal battles between the ethnic groups in Ogaden, Oromia, Amhara and so on. That these persists and the state isn’t issuing statements of security or even securing the citizens, whose ending up in cross-fire. Therefore, the ambition of the PM should be to regain peace and prosperity and not just become an initial one-party state.

This seems to be his main goal, to take away the hassle of multi-party coalition in favour of one party rule. As it has seemed like, but he is taking away that to ensure, that he doesn’t have to comply to other forces within the coalition, as they would be directly one organization instead. It is smart, but certainly, the ones finding themselves as minorities will feel squeezed in this.

“In its statement, TPLF in no uncertain terms believes, 1) the coming national election must be held as planned, 2) the planned transformation of EPRDF in to a single party is unattainable and makes no sense now when the main four EPRDF members are not seeing eye to eye on many issues, 3) the country is at risk of disintegrating, better late than never to go back to the tested EPRDF way of governing, 4)TPLF is saddened to know the Ethiopia that used to be peacemaker in many other countries is today begging for helping hand to restore its own peace., 5) TPLF is bemused to hear the government is thinking to invite outsiders to keep peace in the country. 6) TPLF call on all peace loving people to join its forthcoming effort to restore law and order and democratic governance in the country!” (TPLF, 12.04.2019)

“Addis Ababa, April 12, 2019 (FBC) –The Council of the Ethiopian People’s Revolutionary Democratic Front (EPRDF) will hold its regular session as of next Monday. According to a statement issued by the Council, the meeting is to discuss current national agendas and evaluate organizational performances of the Front over the past months.” (Fana BC – ’EPRDF Council To Meet Next Monday’ (12.04.2019).

We can even see the power-block, the ruling elite and the greatest obstacle to a one-party movement, instead of coalition is the TPLF. The ones who is known to control and also manipulate it to their advantage. That is why this is a rare moment of history. Where a reforming Prime Minister, someone who tries to make a difference. Failing at it, but still trying within the parameter of his power. As he is one of them and knows the system.

What is striking in the game of trying to forge a one-party political movement. Even as the EPRDF have allowed the Oromo Liberation Front and other former illegal opposition movements to partly operate. They are still not viable in the political spectrum. So, before the next election to make the Coalition into ONE-PARTY, would in some spheres ensure a one-party state. As the others cannot compete or have the ability to be seen. Since, they are minor players and the ERPDF have the whole state machinery behind them.

That is why I am shocked that the TPLF doesn’t want to do this. It would be a WIN-WIN, though the TPLF emblem and superiority would be a fraction of the party and not an separate controlling entity. That is maybe their fear of becoming second fiddle and losing their codes of conduct. Therefore, they cannot muster support for a One-Party vision.

This is good for Ethiopia to have more parties, more people possible representing them. That should not be on ethnic lines, because that is just stirring pot of trouble. A kettle already boiling and internal conflicts spiralling out of control. That is why the Republic is faced with a million internally displaced people. This should be a warning to the authorities, that their policies and their vision is distorted, as so many people are struggling to live in their homes and in their homestead.

Surely, the TPLF and the Woyane want all control. That is not new, the ODP trying to get more balance of power, as well as possibly the others in the coalition. However, this might just be another play for the facade, just to look like the coalition is moving somewhere. As the EPRDF have been more cautious about peace missions in the region, than securing the internal conflicts. This should be the priority. To ensure the villages, the homes and the lives of citizens who are endangered and with security organizations not shielding their homes and lives. However, that is second fiddle in the battle of power in Addis, which is apparently, more important than changing the lives of ordinary citizens. Peace.