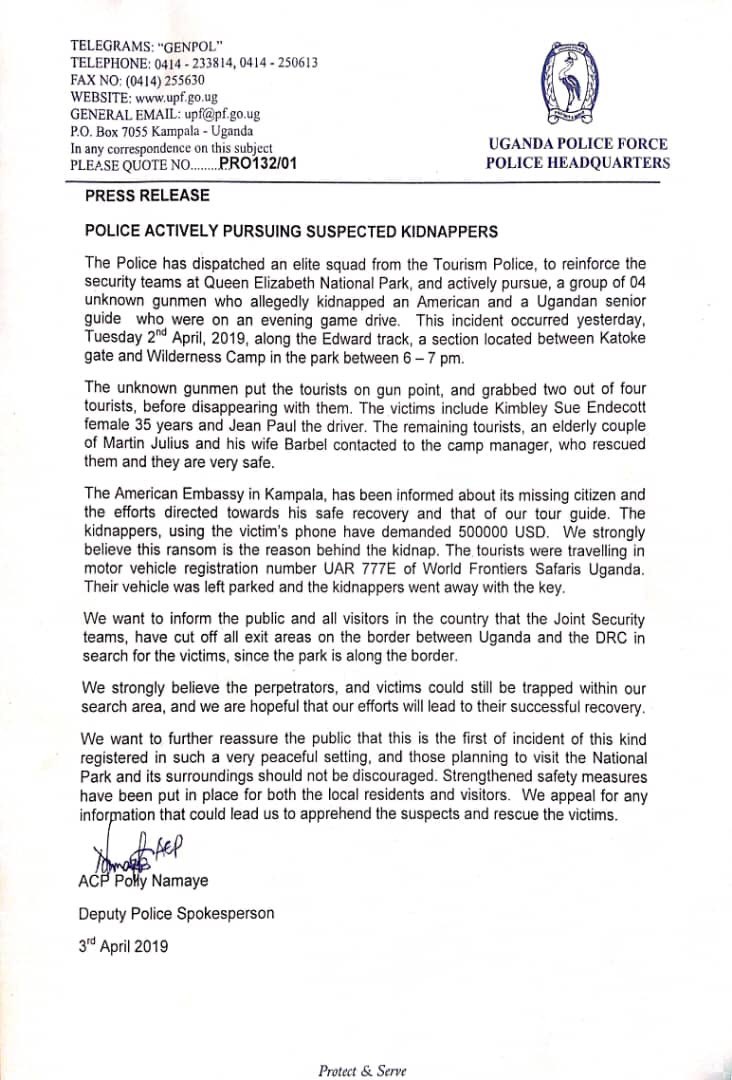 On the 3rd April 2019 there was two Americans kidnapped at the Queen Elizabeth National Park. There been speculations about whose behind it and who claimed the ransom for the disappearance of them. The information is still not clear, as both the Security Agencies are keeping information close to their chest. But also, the willingness of adversaries to spell the beans of ill-will of the other party.

As the Uganda-Rwandan tensions continues. That is why I will show supposed intelligence from both Virunga Post and Command1Post, which both are based respectfully in Rwandan and Ugandan hemisphere. They are clear indication of what the different parties believes, plus Daily Monitor explanation of what happened, but we don’t have the whole story.

Here is what we have for now.

“How it Happened: “On Tuesday, at around 5.30pm, Mr Natukunda says he received phone calls from people in the national park informing him that tourists had been abducted. On further inquiry, Mr Natukunda says he was told that about four people in a vehicle had gone on a game drive around Edward Flats (flat area close to Lake Edward) not far from to the Uganda-DR Congo border had been abducted. “I was told by camp (lodge) operators that this was a family of two elderly parents and their daughter; that they had gone to the park without informing the administration of the camp and had no armed escorts,” Mr Natukunda said. He says the normal practice is that tourists go on game drives with armed rangers and guides. “That (driving unaccompanied) was a mistake because going on game drive without security is not the usual practice,” Mr Natukunda stresses. The kidnappers took with them Ms Kimberly and their guide, but left behind her parents, Mr Julius Martin and his wife Barbel. Mr Natukunda speculates that the kidnappers might have decided they did not want to move long distances in the jungles with elderly people, who have limited physical energy, but that their decision could have been informed by a desire to leave the parents behind so that they mobilise the ransom money” (Tumushabe & Kinene, 2019)

“The Rwandans are said to have been travelling in three mini-buses registration numbers UBD 338V, UBA 841D, and UBE 325P. Some did not have clear travel documents, raising suspicion. The regional police commander Rwenzori East Vincent Mwesigye refused to disclose the identities of detained. Mwesigye said their arrest was now a bigger issue that could be handled at senior level. “There is no comment I can give you at the moment,” Mwesigye said. Journalists could hardly be allowed to enter the police station to interview some of the suspects” (Command1Post, 2019)

“Sources who intimated to us revealed a deliberate plan by CMI, which has specifically been cited in facilitating Rwandans to join a rebel outfit in the Democratic Republic of Congo, to train as they continue to prepare to attack and destabilize Rwanda. The recruits are channeled through Uganda with facilitation of CMI to join training bases in DRC, as established by a UN Mapping Report in December last year. “In trying to analyze this scenario, one should not look further than the Kikagati incident where in 2017, a similar number was arrested on the Tanzanian border with Uganda headed for the same training camps,” a source said on condition of anonymity” (…) “Our source further said that by trying to gag the local police that arrested the group, and blocking the media from seeing the suspects, they are deliberately avoiding the Kikagati debacle that was a smack in the face of CMI. Because of the attention the group got, the authorities in Uganda were forced to process them through courts but the case was later bungled and the suspects reportedly released. “The less the world knows about the group, the better for them,” said the source” (Muhumuza, 2019).

We can see that there is conflicting stories, but one thing that combines the two spheres of information. That the Rwandan are claiming to keep it low-key for the sake of the world, while the Ugandan doesn’t want to disclose to much. Which is a nice combo.

However, in this sense, the Security Agencies says this is to be dealt with at the Senior Level, while they are trying to cover-up the connections to groups silently supported by the Ugandan government to destabilize Rwanda. Alas, we don’t know this, because this information is not put into the public.

The states are clearly using their platforms to strike against each other. In this instance, we cannot know what is true or not. Because, the stories aren’t adding up. While the US Tourists is caught in the cross-fire.

Time will tell, what is the real deal, but we are seeing the parties are playing shadow-games with each other. Who knows what is truth at this point, because they are both playing with fire. Peace.

Muhumuza, Alex – ‘Could the Queen Elizabeth National Park tourist kidnap be an inside job by UPDF?’ 06.04.2019, link: https://virungapost.com/could-the-queen-elizabeth-national-park-tourist-kidnap-be-an-inside-job-by-updf/