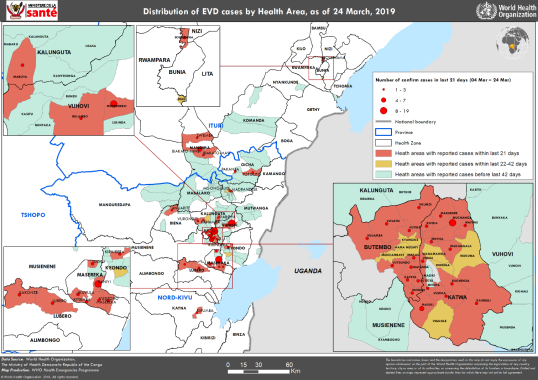 Response teams are facing daily challenges in ensuring timely and thorough identification and investigation of all cases amidst a backdrop of sporadic violence.

GENEVA, Switzerland, March 29, 2019 – The ongoing Ebola virus disease (EVD) outbreak in the North Kivu and Ituri provinces saw a rise in the number of new cases this past week. At this time, response teams are facing daily challenges in ensuring timely and thorough identification and investigation of all cases amidst a backdrop of sporadic violence from armed groups and pockets of mistrust in some affected communities. Despite this, progress is being made in areas such as Mandima, Masereka and Vuhovi, where response teams are gradually able to access once again and acceptance by the community of proven interventions to break the chains of transmission is observed.

During the last 21 days (6 – 26 March), a total of 125 new cases were reported from 51 health areas within 12 of the 21 health zones affected to date; 38% of the 133 health areas affected to date (Figure 2). The majority of these cases were from remaining hotspot areas of Katwa (36), Butembo (14), and three emerging clusters in Mandima (19), Masereka (18) and Vuhovi (17), in addition to a limited number of cases in other areas (Table 1). All cases link back to chains of transmission in hotspot areas, with onward local transmission observed in a limited number of towns and villages within family/social networks or health centers where cases have visited prior to their detection and isolation.

Community engagement efforts to encourage greater local participation and ownership of the outbreak response is ongoing and has yielded some success in many areas. In Butembo and Katwa this past week, a total of 4171 households have been visited by community health volunteers and Red Cross volunteers. This past week also saw the establishment of nine community committees to enhance direct dialogue with healthcare workers and empower community members to partake in the decision-making process of the local response. Special dialogues are being held in the communities where there have been the most frequent incidents. Herein, an anthropologist first meets with the community to ascertain their concerns, then arranges for communal meetings where these concerns can be discussed, including amongst local youth leaders, women’s associations, traditional practitioners, and healthcare providers.

As of 26 March, 324 EVD patients have recovered and been discharged from Ebola Treatment Centres. In Beni, local NGOs and international teams are currently conducting eye care training for ten ophthalmologists and establishing dedicated eye care clinics to provide screening and eye care for EVD survivors. To date, 145 survivors have been screened in these clinics and a total of 293 survivors have enrolled in the survivor’s programme.

Notable strides have also been made in improving IPC capacities in healthcare facilities. Since January, IPC field teams have decontaminated over 250 healthcare facilities and households, provided over 100 supply kits, and trained over 3000 healthcare workers in IPC. A recent National IPC workshop has been completed to aid the implementation of new IPC strategies, while the establishment of an IPC task force has further improved partner communication and coordination at all levels. The work is, however, is ongoing and IPC teams continue to respond to new instances of nosocomial transmission with the emergence of clusters in previously unaffected communities and health facilities.

These local successes do not come without its challenges. When visiting communities in high risk areas, Ebola response teams sometimes face security challenges. Though no major security incidents have been reported over the last 10 days, the overall situation remains fragile. WHO and partners have recently established operational analysis and coordination centres to both gain a more holistic understanding of how we can engage communities more effectively, as well as further increase operational awareness of the day to day operations to ensure the safety of frontline healthcare workers and the communities they are aiding. WHO and partners have also strengthened physical security in the treatment centres and accommodations of healthcare workers.

Finding a balance between providing adequate operational protection to community members at risk of Ebola and healthcare workers while simultaneously winning the trust of communities remains an iterative learning process. WHO is constantly evolving the response efforts to address these operational challenges and will continue to step up collaboration with communities to increase acceptance on the ground.

*Data in recent weeks are subject to delays in case confirmation and reporting, as well as ongoing data cleaning

**Total cases and areas affected based during the last 21 days are based on the initial date of case alert, and may differ from date of confirmation and daily reporting by the Ministry of Health.