Turkana Drought: Ruto knows how to insult an Nation! 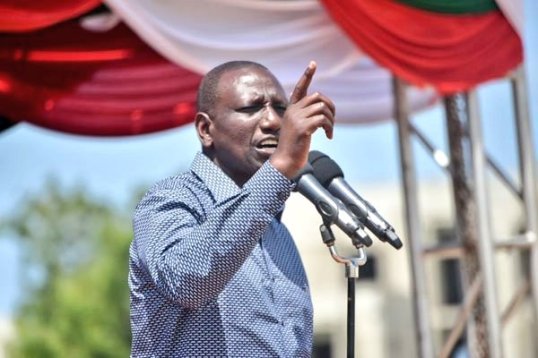 “There is a lot of fake news about what is happening. We have been told that 11 people have died but that is not true. No one has died as a result of the drought and we are working round the clock to ensure that no one dies of hunger” – Deputy President William Ruto

The Deputy President William Ruto better just shut-up, listen to some advice and do something sincere, if it is first time in his life since he left the role as a wandering preacher. It is time for the hustler, the grand standing man of big PR Stunts to act swiftly and actually coordinate the government combined with the whole Nairobi machinery and all authorities. To ensure that the 1 million whose in jeopardy over a warned drought in Turkana gets help.

This is if the DP cares or even has a heart, unless he wants to continue to live lavish and enriching himself on others tragedy, because that is what he does. He sits in air-conditioned home, with a nice green garden, big pool and expensive cars. While fellow citizens go without food for days, because the DP cannot do his, neither any of the other Cabinet Secretaries.

This is really insulting to the people of Turkana. A people who deserves the state to act upon this. Even some people have suggested that its happen every ten years in the region. This means, the state has known about this, as this has happen every ten year. Not only the possible FEWS NET warning in December, which stated this and the state didn’t upon that. Not the Local Government, neither the National Government. They both didn’t act or see it fit to act differently, as the drought, the shortfall of rain was on the horizon. Still, they didn’t think of the consequences, because they are living good, secured and has a pantry with food, anyway.

There been reports of dead in various of villages and counties, however, the state does whatever it can to downplay this. Which is a disgrace, not only to the deceased, but to the public, which knows better. It is insulting to the ones who are struggling and lacking the basics, because the state didn’t plan to grain storage, education in caring for the environment or lean months. Alas, the state haven’t prepared or secured, the food insecurity, which it should have. Instead, they have busy scheduling corruption scandals.

The Jubilee, the DP and the cabinet combined with the local government in the drought hit region. Got to act, wisely and with measures to secure the lives at stake in Turkana. That is, if they really care or more preoccupied with keeping power by any means, while citizens are starving… it is happening on their watch. Still, they are trying to deflect that, its one million citizens who struggles to eat. They got nothing and awaiting handouts, because the state haven’t been concerned about their food insecurity.

DP Ruto, shut-up, listen and take some advice. DP Ruto, please open your ears, get some valuable advice and do something. Not try to PR Stunt this away. That is demeaning and insulting to the public of not only Turkana, but anyone who cares about humanity. Every single person dying because of this, is a foolish death. Because, you and your people could have ensured and facilitated the public and region. So, that it would be prepared for the upcoming dry-season, the shortfall of rain and the IPC 3 level. However, you where busy doing everything else. Peace.