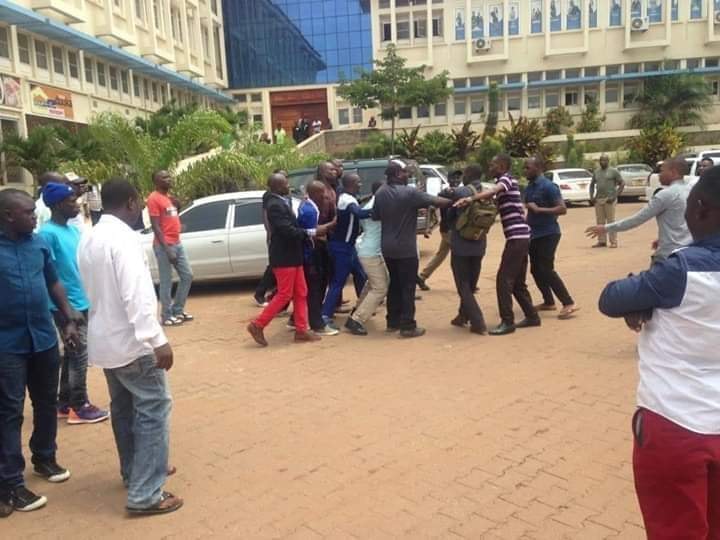 Yesterday’s unneeded drama and heckling outside of CBS Radio Station as Dr. Kizza Besigye left the station. It was speculated that the ones doing this was associated with the People Power Movement and Robert Kyagulanyi aka Bobi Wine. However, he has disassociated and said that isn’t the way.

We have to reconfigure something, as the radical people will always surface in any bracket of the public. In any part of a party and in a movement. That is a natural feature within any party and for all sorts of reasons. That is why we get days like yesterday. This is not a vindication of Mwenda’s attacks on the Bobi Wine and Defiance Campaign of Besigye. No, it is just a reality check, because, it matters everywhere. The majority isn’t like that, but a selected few.

What we do know now, is that these who went there yesterday might be staged or hired to do so. They were not directly ordered or behind it, as it has been speculated that a James Mubiru is behind it. Which hired people to carry on with the slogans of Bobi Wine and his movement, while heckling and addressing Besigye yesterday. This is then not an direct attack of Bobi Wine or his people, but instead a hired man, whose using money to get people to create a staged fuzz.

Therefore, the disassociation of Bobi Wine makes sense, but as it is staged. It is important that this is supposed to make these two look like enemies in the public perception. Even though that is far from true, as these two has been close and also talked on various occasions. Both Opposition leaders are working for the same cause. However, for the NRM to look strong, the Opposition needs to be infighting and needs to weakening itself. Because, then the NRM is the only viable avenue, even when the side-roads are better. Since, it looks hectic and filled with blockades, instead of a straight road to redemption.

That is what is up. That the NRM and the President is having a quick victory if the People Power and FDC is fighting. If Besigye and Bobi Wine is fighting too. If the NRM gets the DP, UPC, JEEMA, FDC and People Power all against each other. Than, the NRM will easily win. Not that they need it peaceful and friendly atmosphere. Because, the NRM will rig the up-coming elections.

Still, for the public perception sake, the NRM needs the infighting and the bickering, where the Opposition seems more fragmented than it is. Then the President can proclaim that he is only viable way out and the Opposition is just mess. That he is the only saviour and the NRM only has the solutions, because the Opposition is making havoc, even without power. This is the ambition of this sort of play.

Not that the Opposition needs a new The Democratic Alliance (TDA) or an Inter-Party Coalition (IPC), but an cohesive strategy to show progress and ability to be significant better; than what is currently ruling the Republic. That doesn’t mean that they should follow the DP idea of challenging the NRM with Joint Candidates. With that the Opposition is not showing strength, but creating a two-party system. Because, they lack faith in their own candidates and want to ensure less costs for a possible victory.

Instead, the Opposition should field all candidates and prove their value to the voters. Even if that fragment the votes. Because, that is natural, but at the same time work together with common goals, as they are all supposed to want to show supremacy and better political platform than NRM. That should make sense.

That is why we need to see Bobi Wine and Besigye working together in a cohesive and in a manner, where the public trust their agenda. Where the public perception is positive and where they are showing progressive means to further their work. They don’t need bickering and in-fighting. That is something the NRM can do themselves, as they usually does in their Primaries. We can just await the chaos coming up in the Road to General Elections of 2021.

That is why they stage this sort of operations. To make the Opposition look bad. Make someone a victim and blame someone else. Even if it is a ploy to play the public. They might think they are able to succeed, but when you look through it all. Then you see why and know the agenda. That is why you know it is deliberate by the regime to make a fool of the opposition. Instead, they are looking like Tin-Soldiers on the streets.

What we are seeing is more of the power of Besigye and Bobi Wine, their supporters and their vision. Instead of making them look foolish, which was the goal. Peace.