Otafiire is wrong on Museveni: He will not leave by the ballot, but when he dies! 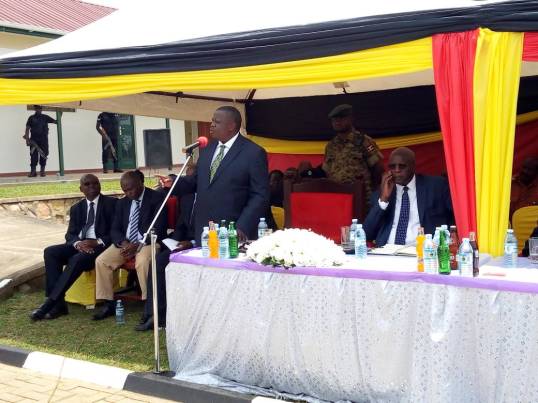 This is not a positive message, because there are really no narrative in this manner and with the times that can be like this. If President Yoweri Kaguta Museveni had shown any signs of giving way or even planning succession, the words of an election would have sounded real. However, for someone saying that knows perfectly well how the President is, Otafiire knows his words isn’t true.

Otafiire says Museveni will only leave if he voted out of office! How is that even possible? The Presidential Elections are filled with intimidation, rigging and securing the President by any means. There are no math, no possibility that Museveni will ever run a free and fair election. He will not let the people decide, he has already made his decision and the result is well-known, year in advance. Museveni has run the Republic since 1986.

He lost an election in 1980 and have never lost one since, the first one in 1996 and since then had total control. There haven’t been much change or significant changes since Multi-Party Elections happened in 2006. Which was something Museveni was against, he wanted everything in-house and under his umbrella. That is something he still wants and therefore, wants everyone to get people who will follow his guidelines and his vision from the State House. That is why he is saying people are misguided and wrong, when they pick leaders that he cannot order directly around.

Otafiire knows all this and has to change the narrative, because any government who meets to much internal pressure will fall. You are able to detain people, but not have the power to arrest the whole population. You might have the ability to torture the leaders and key activists, but you cannot torture all people. You cannot kill all opposition or everyone standing in the way of the King, but you can take out the chosen few who challenge the leadership. That is all well-known things for Otafiire. That is what the NRM has done since inception in the 1980s. One-by-One as it has been needed. The difference, is that now the news isn’t only in print, but the words and reactions from the oppression hits the web in minutes.

NO ELECTION will ever change the throne. That is not how to dismantle the rule of Museveni, if so, then there would have been a possibility in 1996, 2001, 2006, 2011 and 2016. Neither of them, there was any chances for anyone else to win. Even as the decades has gone and the time of liberation has shown to be the same as the tyrants before. Museveni was supposed to bring progress, but bringing more regress.

Otafiire knows, this the people should know too, as the military and army are in the streets. Because Museveni and NRM doesn’t have the love of the people, if they did, why do they need to guard the streets? They should secure the sovereign state’s borders and not occupy their own territory. That is what Museveni does and Otafiire knows that too.

Otafiire might have a blurred vision or is so loyal, that he have to spin it. Since he wouldn’t be relevant or even have Cabinet Post. If it wasn’t for the brownie points he has already scored with the President, he wouldn’t be there today.

The NRM apologists can lie to the public, but some of us has to address it, because we knows better. Peace.