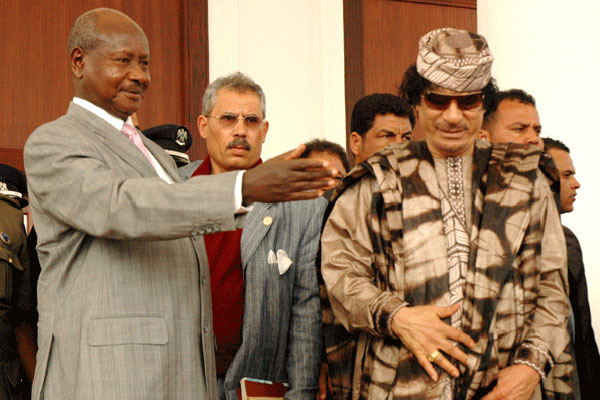 Well, President Yoweri Kaguta Museveni, your claiming the ones going to the street is financed to destroy the economy of the Republic. They don’t need to go to the street for doing so, the National Resistance Movement (NRM) and the ways your running the country. Your destroying the economy perfectly well, as the OTT Tax isn’t giving the added revenue as expected. Therefore, you should carry your words with a little more worry. Robert Kyagulanyi aka Bobi Wine and his independents are not financing people to go the streets. They are already tired of you and your kind. The Bush-war entitlement. That is why I will show the connection with Gadaffi and how he used to sponsor you with guns and ammunition during the bush-war.

“Greetings again. Yesterday while talking about the Security forces and the Bobi Wine group, I made reference to financiers of rioters who hope to damage the economy of Uganda which is, finally, taking off by developing fast” (Yoweri Kaguta Museveni, 24.08.2018).

So, President Museveni might be forgetful, as he is blaming others for what he did himself. People like me doesn’t forget, but he does. Museveni wouldn’t been able to win a prolonged war on his empty stomach and empty words. He needed support, as he claimed to have little connections with others. But there are proof that he got massive support from Muamar Gaddafi.

“Idi Amin’s former Minister of Finance, Brig. Moses Ali, along with an economist, Dr. Suleiman Kiggundu, Ugandan Muslim clerics Shiekh Ali Kulumba and Shiekh Obeid Kamulegeya, and a businessman called Habib Hassan Kagimu are the men who introduced Yoweri Museveni, the leader of a news fighting group the National Resistance Army (NRA), to Gaddafi in 1981 and so started the Libyan sponsorship of the NRA guerrillas” (…)”Libya then started air dropping heavy field guns and rocket launchers into the NRA camps in Luwero Triangle in central Uganda in 1982, greatly boosting the NRA guerrillas and making possible their victory in Jan. 1986” (…)”Brig Ali was in jail in Kampala when Gaddafi first visited Uganda led by Museveni in 1987. Ali had to be taken out of jail after Gaddafi asked about his whereabouts” (…)”In the early days of the new NRM government, several officers and men of the new national army, the National Resistance Army (NRA) were sent to Libya for military training” (Dispatch, 2011).

With this in mind, maybe, just maybe, someone like Museveni should be more careful with his words. He remembers back when he got the supplies and the needed boost from Libya to able to gain power. Of late his army wouldn’t been supplied or even have the weapons they carry, if the United States didn’t boast him. Therefore, he should be a little more careful with his words. Musveni are claiming unfound and unproven words.

He is just putting up empty allegations on Bobi Wine and the rioters, the demonstrators and the people who are using their civic duty, as they are tired of Museveni and his tyranny. He should understand that, as his entitled ass, is thinking they all are his pawns. Like all the lackeys in the cabinet and such. Museveni, your rhetoric and use words are only using it words. As you have been putting and name-calling the supporters. Calling pseudo-intellectuals, fascists and terrorists. Therefore, now claiming they are sponsored is just mere spin.

I don’t know what is going through his mind. But someone who has sponsored all his life, who has been a donor-darling and gotten direct state aid to dwindle that all away without much results. Should be careful with his words. Instead, he is blaming the rioters for being paid and planning this to hurt the economy. However, the economy is destroyed by him and his henchmen. They don’t need help to do that. They do that without help of the peasants. Peasants are dwelling in the streets awaiting the next opportunity anyway. Not like the President is opening the door or creating a better state of affairs. He is just eating himself. Peace.