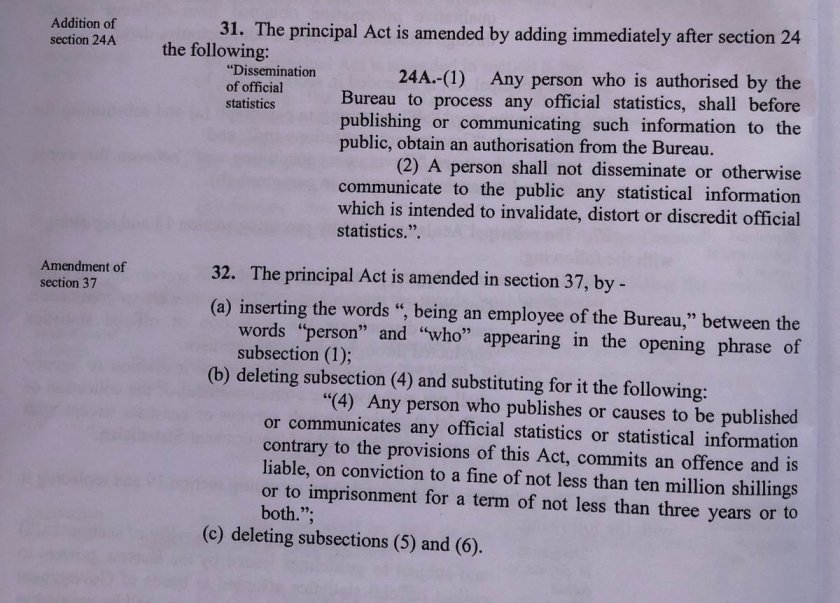 The Chama Cha Mapinduzi (CCM) and President John Pombe Magufuli who has done his to silence critics, media and opposition politicians. Now, he is starting to control the Education Sector or the Higher Education, as the ones doing surveys and research now with the amendment of the Written Laws and the Principal Acts, Amendment 31. which will stop you from publish any data without permission. Secondly, the same folks cannot publish the data- or statistics even if it truthful, when it differs with the official government data. Therefore, the truth always has to be similar to the government and not be separated from that.

The CCM and Magufuli must be afraid of what the NGOs and Higher Education are doing, as they want the National Bureau of Statistics (NBS) has to decide if their survey or study is even truthful compared to the numbers they have crunched. They are not accepting the works or the analysis of others. As they might find out that the beans-production isn’t as good as the CCM wants or even the inflation in the coastal region compared to Moshi.

That the ones publishing a statistics or data without the permission from the NBS will get a possible fine of 10 million shillings. They are really afraid of the statistics that doesn’t fit the narrative of CCM. They are already afraid of the Social Media, the bloggers and the newspapers, they have suspended people for writing songs and politicians for calling Magufuli a dictator. He really has to take the pulse on everything.

This shows how bad and how weak the President is. He cannot even trust the educational or the ones surveying the land, as they will belittle his ego and his reputation. He has to be the grandest man ever residing in Tanzania. Magufuli has to be praised and loved like a genius. Even if he is far from it. Is he afraid of academic researchers?

Have they shaded him so much, that the lack of economic progress or even keeping up with his own pledges, become so bad he has to secure the data the Higher Education and the NGOs are creating? Unless, they fit the narrative of the CCM?

That is what I am getting out of this. The Tanzanian government are afraid of researchers, NGOs and the educational surveys, that might find results that doesn’t fit the President and his party. That is why he has to say: “no, you cannot publish that”. That is what he is up too, because he cannot have statistics showing the reality, he needs numbers that are fitting him. Good to know how tin-skinned the man is. Peace.