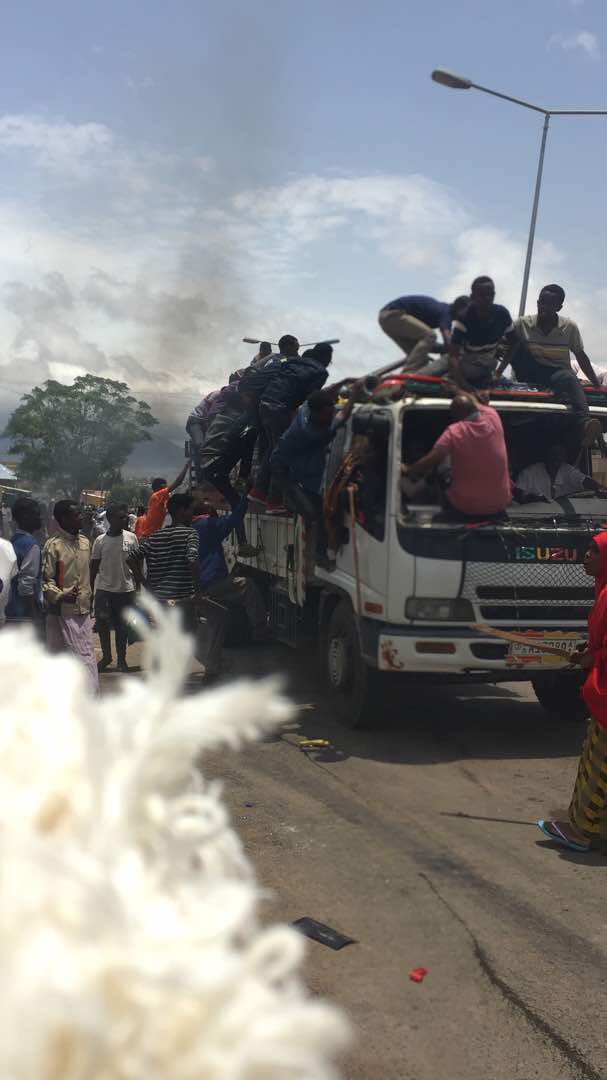 The Somali Region or the Ogaden Region have been under-fire for months. Over the weekend the Ethiopian People’s Revolutionary Defence Force (EPRDF) send the Ethiopian National Defense Force (ENDF) to takeover the capital of the region, they ceased the important buildings as the looting and destroying of city, therefore, the army took the Parliament, the banks and major buildings. While the local group Heego of Abdi Illey created havoc. By Saturday, there was reports of calm, but the army was out and the Liyu Police had taken control.

Today on Monday after time in house-arrest, Illey have been sacked and he has gotten a successor by the authorities. However, the violence isn’t slowing down, but escalating to heavy proportions. You can wonder how many Somali people have to die, because of the will of Oromo to annex this region and its resources. Oromo People’s Democratic Organization (OPDO) and the EPRDF needs to react and stop the violence. That Dr. Abiy Ahmed Ali have been silent and not really reacted, but let the Oromo attack these areas and killing, also accepting the army ceasing JigJjiga, isn’t a good sign. That is a sign of internal battlefield within the Federal Republic. Not pacing down, but more violence and more hurt for innocent civilians.

“The town of Tuliguleed has been a flash point for conflict between indigenous Somalis and Oromo settlers in the past but what has transpired in the past 24 hours has never been seen before. Heavily armed Oromo militia’s launched an indiscriminate attack on multiple Somali inhabited villages on the border between Ogaden and the neighboring Oromo regional state. Armed Oromo militia’s entered the villages and began indiscriminately opening fire on civilians, forcing hundreds to flee to the nearby town of Tuliguleed and the surrounding areas. The rogue paramilitary militia’s began subsequently burning villages to the ground, till it was completely ash. A total of nine villages where burned to the ground” (Halgan Media – ‘Oromo Militia’s Burn Down Nine Villages In Ogaden Within The Past 24 Hours’ 06.08.2018 link: http://halganmedia.net/oromo-militias-burn-down-nine-villages-in-ogaden-within-the-past-24-hours/).

There are reports of violence also in Harar, Dire Dawa and not only in the areas around Jigjiga. But this is deliberate activity, especially when the authorities have cut the Telecommunications, the internet and everything else used to spread a single word. This is what the EPRDF have done in Amhara and Oromia, when they have forced their State of Emergency to control these areas. Instead of doing it there by the Tigray People’s Liberation Force (TPLF), not the Queero and the Oromos feels big enough to charge at the people of Ogaden. This happens as the oil revenue has come.

This comes after killings last month in Moyale, as their been movement and seems to be planned violence now within the Ogaden. Like they want to burn and destroy, so they can move in and occupy it. It is an ancient tactic done by plenty and now the Oromo is doing it to their Somali brothers. This is sad as the Oromo and Oromia have been protesting and fighting for their rights. Instead of living in solidarity and trying to forge unity with the rest of the Federal Republic. They are using violence against brothers. That is just sad and mediocre of the people whose deserved to be free from toils of the TPLF. Is using the same means and deception of violence against others. They should know better, because they really had their hurt and pain for so long because of EPRDF.

It is impossible to know at the moment how many whose died in the skirmishes from ENDF and Queero in Ogaden. But each one, is one to many, just like every single one dying in Oromia because of the TPLF, was one to many. No one deserves to die because of the attitude of supremacy or ideals of that sort. Peace.