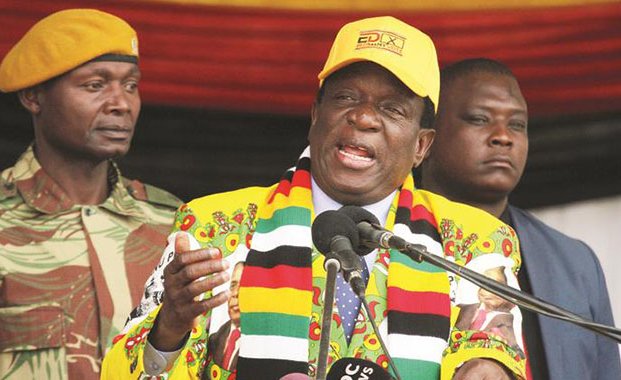 “I want to tell observers that they should do what they came to Zimbabwe for, they should not meddle in the internal politics of this country, the airport is there, they will leave.” – Emmerson Mnangagwa on the Final Rally in Harare yesterday, 28.07.2018.

Just like the weirdness of Nelson Chamisa endorsing Mugabe yesterday, there was one thing that was like another relic of the past, that shouldn’t be there. Now the incumbent President Emmerson Mnangagwa have used the scare tactics of his previous master. If he was democratic and had faith in the institutions of the Zimbabwe Electoral Commission (ZEC), he should not fear the observers and their reports. They are just stating what they see on the ground and possible misgivings in the process.

It is just so weird that in the final stages of the election, the relics of Mugabe are re-appearing for the people to see. Just like November 2017 had less value. You can wonder if Mnangagwa couldn’t hold his tongue, since he had to be like his previous boss. He has learned from Mugabe and clearly shown that will rule like him. It is just the change of head, but the Zimbabwe African National Union – Patriotic Front (ZANU-PF) are still run like the old ones did. Just a few minor changes, more PR stunts, but less reforms than needed.

“Mugabe went on to say that U.S. Ambassador to Zimbabwe James McGee would be expelled from the country if he “persisted in meddling in Zimbabwe’s electoral process,” the newspaper reported. The fallout from Zimbabwe’s stalled election has brought international criticism, with Frazer taking the most emphatic stance. In April, Frazer accused Mugabe, who has ruled Zimbabwe for nearly three decades, of “trying to steal the election” and “intimidating the population and election officials as well.” (CNN – ‘Mugabe labels U.S. diplomat a ‘prostitute’ 26.05.2008).

We should not hear the relics of the past, Mugabeisms should be gone and went away in November 2017. But that shows his power behind the scenes and how much impact he has in his Presidency, as the now incumbent sounds just like him. Mnangagwa should know better, but with his confidence, he is thinking this is wise. That the government shield itself and not like to act all transparent and act with questionable behavior. This is why people have found ghosts in the voter rolls and found misgivings in the questions of the ballots. There are so many open questions and the polls are around the corner.

However, Mnangagwa acts like he was Mugabe. That is not a good sign for the polls and neither for the coming days. As who knows how this will play out. There been positive signs, but there are still a strong Zanu-PF, that I doubt would accept loosing, neither would MDC-Alliance. Therefore, the polls and the aftermath will be something else.

Let’s have hope for a better tomorrow and not more return of old. Zimbabwe don’t need that, it needs to move-on into greener pastures. Peace.