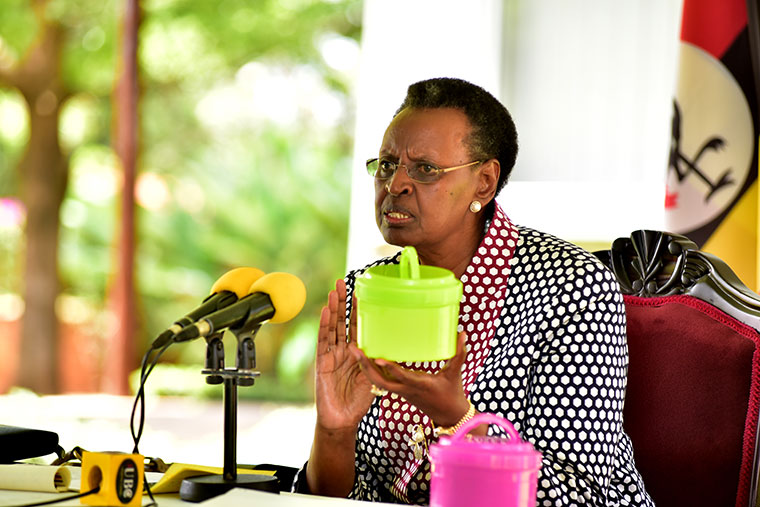 I am writing to you again, because of your statements to the Ugandan parents who isn’t apparently feeding their kids. Because this is epidemic and systemic default from your mans long-term government and his lack of integrity and also lack of building resilient institutions. Because all has to go through your husband, Yoweri. Therefore, he can write a letter and reappoint people your firing. Since he is the head, not only of the household, but also the Republic.

However, that is knowledge you already knew, Janet. That is why this is insulting, what you said in a Press Briefing today:

““It tells us something about selfishness that there are fathers who use Shs1000 for alcohol every day and mothers who spend money doing their hair and working on their nails but cannot buy containers to pack food for their children,” Ms Museveni said” (Daily Monitor – ‘Parents must feed their children or face the law, says Janet Museveni’ 02.06.2018 link:http://www.monitor.co.ug/News/National/Parents-must-feed-their-children-face-the-law-Janet-Museveni/688334-4592282-4dh2vaz/index.html )

I find it selfish of you to single people out and to put everyone in one bracket. When you know the state of the budget, the misuse of government funds, the lack of funds for salaries for civil servants and teachers. The own ministry your running is controlling dozens upon dozens of depleted schools and lack of accountability. Therefore, you should be careful addressing others. When your not the perfect princess you want to be.

Janet, it is the government fault, that there are lack of jobs, lack of opportunities for the graduates from college and university and all the other compromised situations that your government is in control off. You should fix government, before blaming the poor for lack structure and lack of giving way. This belittling the poor, because you have the State House and all the riches of the world. Your entitled to be queen, while others struggle from hand to mouth. Not like the ones who are poor is deciding they don’t want to give food to their kids. But they have no option, because of the systems your government put in place or didn’t care about. Your reckless behavior, your vultures and your thieves are the reason for this poverty.

You Janet and the whole royal cabinet. Should look into yourselves, all your activities and all your policies, all the transactions and all the unaccountable funds and ask yourself. Did you do enough? Did you? Did you really do enough?

“The earlier preliminary report released last September had showed there was an increase in poverty levels from 19.7 per cent to 27.7 per cent. The current figure now puts the total number of poor Ugandans who cannot afford three meals a day to eight million” (MARTIN LUTHER OKETCH – ‘Poverty level increases to 21.4 per cent, says UBOS’ 18.01.2018 link: http://www.monitor.co.ug/News/National/Poverty-level-increases-per-cent-UBOS/688334-4268774-format-xhtml-ubneas/index.html).

When one your watch there is 8 million Ugandans who cannot afford three meals a day, that is your fault and your mistake. That isn’t only the parents. Some parents are bad and do bad with the money. But I doubt that 8 million are drinking, getting boozed up beyond intelligence and getting pedicure. Lets that be clear. Unless, the NRM has configured the stats on that too.

This is disgraceful, that you did this and mocked this people. Instead of figuring out ways of making it better for 8 million Ugandans. You are lecturing them and blaming them, calling them alcoholics and wasting money on luxurious items. That is by the way rich coming from you, as your administration is overspending on the State House and on your family. The wealth and the funds which is around the President is enormous and vast.

Mrs. Janet, there are so much you can do with your power and influence, but you have decided not to care. Your acting as a lecturer, but your actions are lacking any moral substance. If you did care and if your husband cared. There wouldn’t be 8 million in poverty and lacking three meals a day in the Republic. Your family and your husband has had three decades to fix this. Apparently, you haven’t tried.

8 millions are not alcoholics. That is impossible.

Step your game up. Act within reason and be rational. Not demean them, because your responsible, not only for the Ministry of Education and Sports, but for what your bed-mate is doing too.