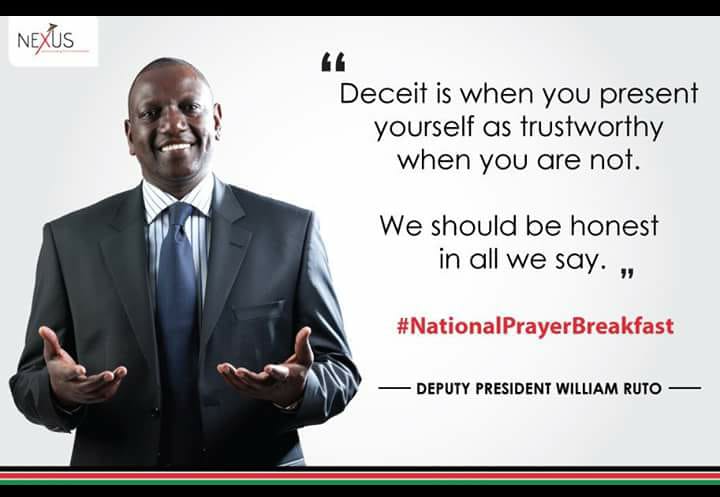 Deputy President William Ruto is one of a kind. The kind that uses fine words and speeches, the ones are defending values, but his actions differs from that. He has finessed the game, using his influence and his value in the system to gain monetary funds. This at a rampant speed, that the check-books cannot recover or even account for the funds. His play-by-play book is made for unaccounted funds and for forging results.

Therefore, a man who has earned a well-fortunate salary in his position, still his wealth over the years has risen astronomically. His houses, his business and his ownership is like a Jeff Bezos of Kenya. The DP has a village called home, own newspapers and whatnot, who knows he has gotten in his hands and pockets. It’s like a giant fountain of money that spiralling in his veins.

DP Ruto, we know you now, we know what your up too. We have seen it for years. It isn’t cool anymore, we know that your in your place for one reason, not to serve Kenya, but serve yourself. You are in position to enrichen yourself and your family, not to be representative for Kenya. If it had been so, you wouldn’t be the famous hustler and the famous go-to-get wealthy politician vibe. Because that is true.

We know you own K24, The Star, Karen Homes, Osere flats in Rongai, Major Amaco Insurance, Oseng Properties Limited, Orterter Enterprises Limited, Weston Hotel, 680 Hotel and Uasin Gishu Residence. This you have gotten on your meagre salary. Billions upon billions in property and ownerships of companies, while earning only millions. You cannot make this up. You have also bought a copper and whatnots of cars within your time in office. Therefore, we know you speak, but do financial warfare.

So please, don’t speak ill of corruption, when you’re the benefactor and owner of it. It wouldn’t be like this if your salary and your benefits was sincere, if your role in government and wealth was real, as your eating like there is no tomorrow. Grabbing whatever possession there is and taking it. We see that, as step by step your grabbing ownership of vital plots, of vital news organizations and also producers, which will generate more income. But in the first place, you shouldn’t have the capacity or wealth to be able to get these. Your not earning enough to be here.

So the gig is up. We know you. You can speak those fine words. But we know the reality, the fantasy is all in your mind. We know that and you cannot say otherwise. We know you will, but it is valued as nothing. None. Okay?

Just stop, it is not funny. Peace.