You know that Kenya Railways Corporation sucks, you know that the Standard Gauge Railways project is fatigued. As the circulations of the Secrecy Agreement that all employees has to sign onto. Which states that the employees cannot tell the truth about the operations or the works of the corporation.

They expect all employees to be strictly confidential about all matters connected with the SGR and the Kenya Railways Corporation. You are not allowed “to record, store copy any information or violating the SGR Operations”. Therefore, the SGR and Corporation are clearly muffling its staff. This includes “participating in negative articles, writings or videoes or photoes on social media or Facebook or Youtube and etc. that involving SGR Operation”. So when the company goes this far, it says how dire the operations are, they cannot be golden, but instead grim.

This is happening after the state orders all Containers from Mombasa to be put on the SGR and also pushing for the public to use the rails. However, it is still not profitable. As the project has been costly and also embarrassing as the grace period for the loans are soon hitting the government. Meaning, the huge loans for the infrastructure investment comes to roost. Therefore, the needs for revenue is even more important. To patch the hurt, before moving on to other projects.

That is why these sort of leaks and showing how far the Company takes it. Shows how bleak the situation is. When they have to muffle and silence the employees. Since the Secrecy Agreement has Chinese signs on them, it could be given by the tendered company, China Communications Construction Company (CCCC), which have the 4 extensions tenders to the previous built railway from Mombasa to Nairobi. Therefore, this could be the direct interference of the contractor CCCC, that would explain why the agreement wrote Youtube as Yutube. Because, that is a site that is banned in China. So, if the CCCC employees wouldn’t know about it and its spelling it would make sense.

Because if the employee was to break the agreement, they would meet the SGR discipline, whatever that means. If that would be termination or put on leave, its hard to know, since their protocols are not out and the KRC/CCCC are not that open on this matter. I am sure they didn’t want the Contracts into the public sphere anyway. Since this is disgusting silencing of the workers and taking away their rights as citizens. This is all communications outside the operations is not allowed. This is not about keeping away company secrets, but keep negative social media impact of the company. However, now that the agreement is out.

I can assure the negative articles will come, not only that the state has order transports of containers directly, that its not profitable and not a wholesome company, instead its a mismanaged State Operated Enterprise (SoE). Surely, the Kenyans should feel betrayed, as they are silenced by outside forces, who are building railways in their republic. The CCCC is acting as kings and they are the servants on the spot. Not allowed to talk or express opinions, just work on the clock and shut-up. That is initially what the contract is saying. Peace. 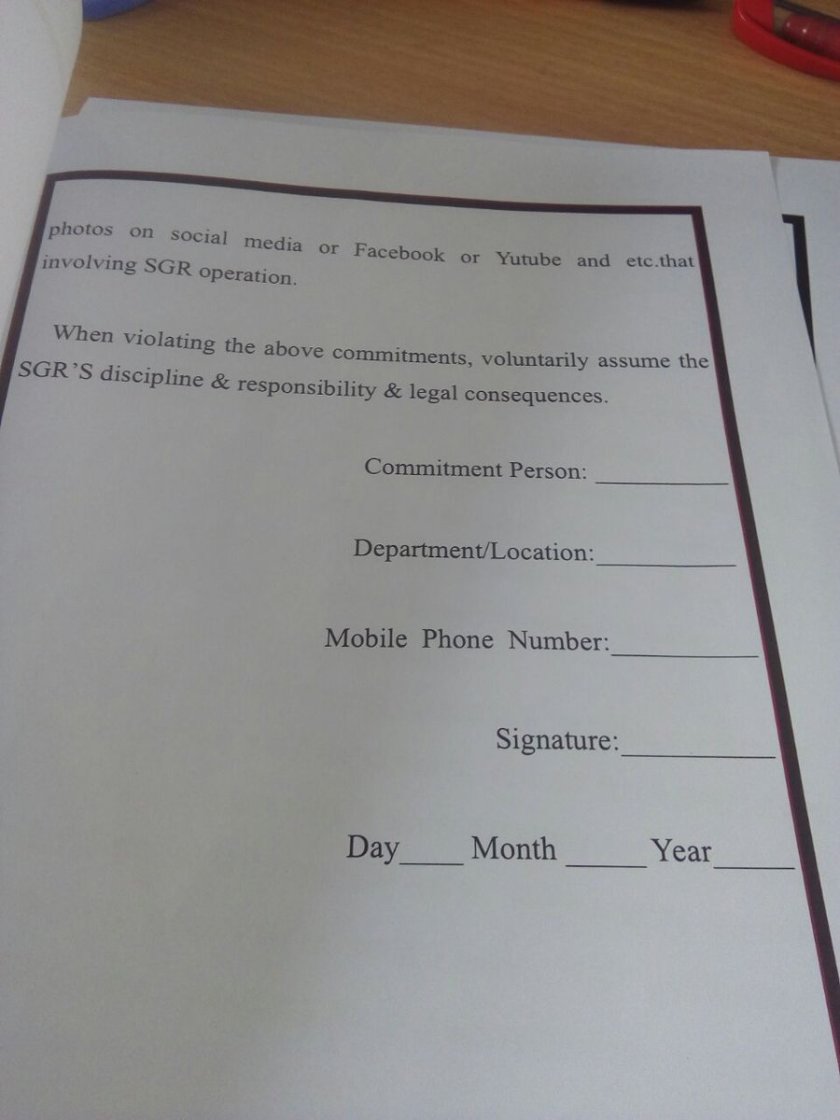