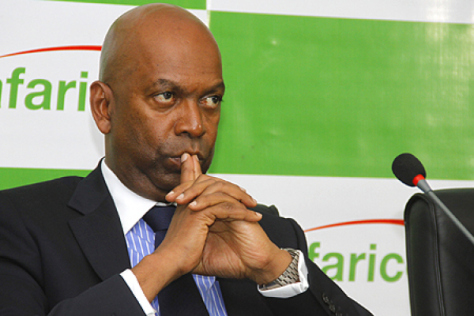 That Bob Collymore has no returned to Safaricom is a sign of the state of affairs, the man whose through 2016 got the dirty laundry in the streets for everyone to see. That Safaricom and Vodaphone takes him back. Shows that the company is so big, it doesn’t care about public perception or their ordeal of the last two years. As they can get scratch free from the dirt and thinks people forget. Collymore is a shady character and runs a dirty business. However, it is profitable, that is why the leadership above him keeps him. They want the easy money and wants to run the market of telecom’s in Kenya. That is what Safaricom does so well.

That Collymore was directly involved in the General Elections, that his misuse of the company within the Results Transmissions, that doesn’t matter now. That the Safaricom used their backbone to support the Jubilee, by canceling and stopping the M-Pesa Paybill to the National Super Alliance (NASA). Shows the lack of tolerance and their political stance. They did that with passion, while fixing and making sure the fraud of an election went through with their back-channels with the Independent Electoral and Boundaries Commission, also with Cambridge Analytica and whatever else that was needed to secure the results into the famous undisclosed server. Collymore did this and fixed that with IEBC, while stopping the cash-flow to NASA. A clear indication of his works. That was the year after the damaging internal report from KPMG.

The KPMG agreement showed how the Safaricom misused their place, their tenders and the procurement of installations of 4G, M-Pesa software and direct dealing with third-parties. This was done in a fashion where the leadership was eating of the top and putting the bills on the consumers. At a rate that was insane. That the 18th February 2016 KPMG Report should mean the end of a career for a leader and CEO like Collymore. But Vodaphone doesn’t give a rats ass. They don’t care as long as their profits are souring in Kenya. They are oblivious and nurturing their pockets, nothing else matters. Even if they are within the pockets of cartels, election-rigging and midst of public outrage. As long as the pockets are filled with shillings, they don’t mind. They can still be proud-cock and be chiefs.

That Safaricom paid of the local-media houses with ad-revenue, that they used their place to keep themselves on top. That doesn’t matter, because the results are blindly positive, even if everyone know knows that the company is run like the mafia. Controlling everything it can, not only selling Mobil-Data, Mobile-Money and Communications, but they are also a FinTech company that has the information on the public that other doesn’t. Who knows how they are using that and misusing that to gain even more profits. When Facebook does it? Why shouldn’t Safaricom too?

That Collymore should be gone, that is the reality, there should be someone who could muster trust and show that its a decent company, not a pillar of power in Kenyan Politics. Which it has become and where it muster all capabilities with the funds to slash stories in the media and also to be directly involved in Results Transmission during the General Elections. Therefore, the importance of the company is beyond communications between the citizens and their data. But also the perception of the trust between them.

Collymore is now the epitome of what is wrong with businesses in Kenya. He is the significant prospect of someone who misuses his position for monetary gain. Instead of being there for just simple services and leave the office in the night. He has directed the company in the midst of public space, making sure his stories are portrayed and cleaning the dirt of his hands. Even if it doesn’t go off, it won’t, not this way.

So Vodaphone, I have one important question:

Where the no-one else on planet earth that have the capabilities to run Safaricom?

Seemingly there should be, but your still behind the man that are really involved in shady deals for you. Taking the dirt and eating it, so that the stakeholders can eat the profits without any questionable