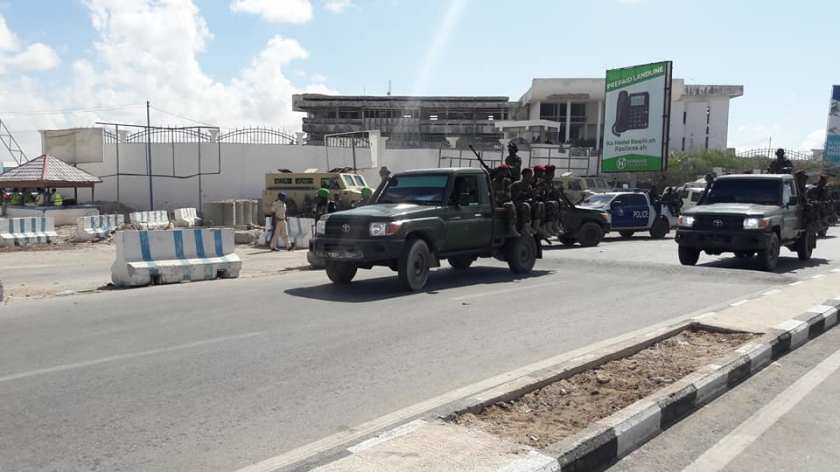 “IGAD Member States must hold an emergency meeting to resolve the protracted political crisis between Legislature and The Executive branches of Somalia Government in order to protect the gains made in security and stability under President Faramaajo. UAE should not undermine the sovereign of the Somali people and its legitimate institutions to function” (Hon. Aden Duale, 06.04.2018).

This is ironic, very ironic, that Intergovenmental Authority on Development (IGAD) should intervene in Somalia after the President and Prime Minister has worked hard to get rid-off the Speaker of the Lower House in Parliament. Where the two leaders has done whatever in their power to get him to resign and stop having a role in the National Assembly. However, the AMISOM, Danab Forces and all the other defensive organizations has been involved. As the motions hasn’t been put or been able to do so. Because of the political stalemate and stand-off, where the President and Prime Minister has lost face.

That is why it is ironic, that a political stand-off between the parties, which has already been involved with foreign forces, that the IGAD has an issue with the UAE in one of their member states. However, for the IGAD it must be a pickle, because to destroy the deal will also cost Ethiopia, which is also a member state. Somaliland government might end on the chopping board, but it will not do things to hurt Ethiopia. That will just not happen, IGAD will not seal the deal. They are not capable.

To call on IGAD, would be more for a PR Stunt, the AMISOM and Somali National Army has to take more cover and secure the manners as it is. Even if the supposed crisis is supposed to be solved on their own. But with the foreign brigades, the mercenaries from both United States and elsewhere, you can wonder if this will go away. That the foreign interests and the possible profits of ports and oil, will become more dire. As the politicians are trying to get their pay-offs. To say something else, is at this stage to be naive and hopeful.

That the Kenyan Majority Leader Duale calls on IGAD. Shows that Somalia needs more foreign involvement to solve self-made political crisis. That is not a sign of strength or protocol. Neither, is a good look, that someone whose army is part of the peacekeeping, but also directly on the border. Is planning to use Multi-National Organization to solve the issue. Instead, of this coming from internally and part of the Parliament itself.

As the self-inflicted problems created by the President and Prime Minister has to be solved. They have to look into themselves, as they have violated the Parliament, misused security organization to insight fear and even lock-down the capital in advance of pushing their motion against the speaker. This sort of activity cannot appear and it only shows lack of parliamentary progress. As the leaders of it is creating this.

IGAD, AMISOM and UNSOM shouldn’t be in the midst of the hornets nest waiting to sting. They will only patch the hurt, but will not fix the underlining issue. The second part of the irony of Hon. Duale. Is that he has issues with UAE, but he as Kenyan has no problem with interfering in Somalia. Which is interesting in itself and should be discussed. Because it shows the mentality and the reasoning behind the KDF involvement, not only for self-defense, but also even supremacy. That cannot be undermined, when he plays the position of IGAD to interfere on his behalf.

It is weird and ironic, but IGAD will not directly solve this matter. That has to be done by both fractions, if they care about their own safety and also the sanctity of the National Assembly. Also, how the Parliamentarians are planning to be bought by the PM or President, even if they are following procedure and listening to the Speaker. You can wonder what and how this will end. But this will not end with an Extra-Ordinary Session of IGAD. If things ended with that, the IGAD wouldn’t need dozens of them on South Sudan. I’m just saying and it has to be said. They can meet in Addis Ababa and speak of peace, but they cannot reasoning with the parties, unless they invite them too.

If not they are just like the American drones bombing as they like and after their collected intelligence of where the militants are. The same can be done by the IGAD, but with documents and meetings, but that will not solve the underlining issues. That will be there. No matter if Duale and the partners of IGAD interfere on his behalf.

It is ironic, that IGAD should interfere here, as the AMISOM tried to back-peddle what they have done in regards to the matter. The Americans hasn’t answered on the possible mercenaries who participated in the stand-off. However, the world has seen this and take notice of it.

Nevertheless, the stand-off, the stakeholders and the ones that in the midst of this, should do themselves a favor and have some fresh air. Because this is all up to the President and Prime Minister, if they want to reconcile their differences with the Speaker. That is if they have any sense at all and not are corporate stooges to outside forces already. If they are not planning to misuse the army and security organization to continue to insight fear in the elected officials in Mogadishu. But as “if they” and not “supposed to” or even “plans to change”, because if things will change, it has to be the ones that push for the orders and sends the soldiers, who has to act and enlighten the world for the reasons behind the matter. Peace.