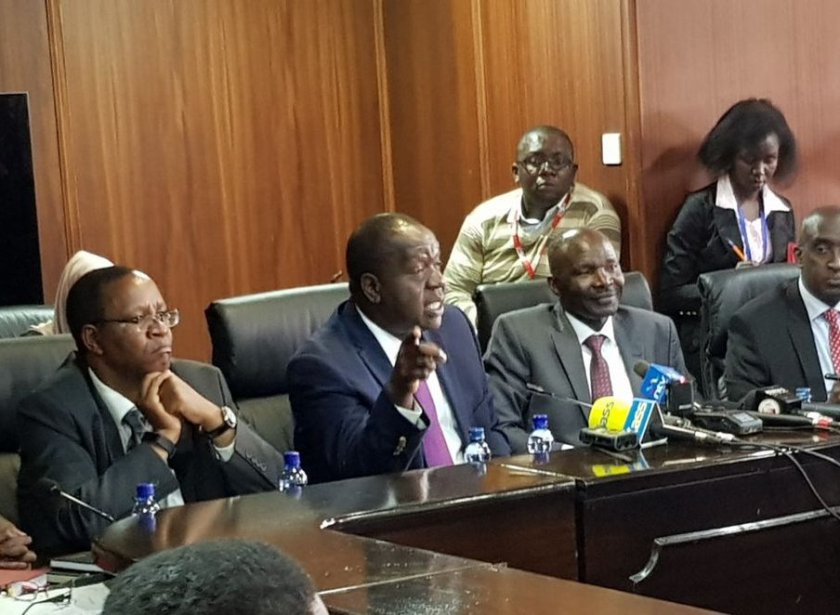 Today, the three fellow dignitaries that was in-charge of deporting Miguna Miguna back to Canada for the Second showed up to Court. Not that it really mattered, because it is farce and the saga continues. They act still with contempt and the show of illegitimacy of their activity, the answers of the CS Fred Matiangi, the Immigration PS Gordon Kihalangwa and IGP Joseph Boinnet in Court wasn’t that flattering. Is is more an insult of natural intelligence. That is why isn’t worth noticing and showing to the world.

The Miguna scandal that is drawn out of proportion, is because of how its handled, what the state has done and how they acted upon it. Nothing has handled with care or after procedure. It has been less protocol and more ignorance is bliss. But the aftermath shows the indifference, that wolves are circling around the sheep. The eagles are flying over their prey, they are all waiting for the moment to strike. To hunt and to get their reward.

You can wonder what these gentlemen are out of this, what is stripes and their value for money. What did they get out of deporting Miguna for the second time? What was the purpose of the exercise, other than making Kenya looking foolish abroad? They certainly succeeded in doing that. Kudos, Matiang’i, Boinnet and Kihalangwa. You did it and deserves a token of success. Maybe a fake DVD will be sufficient?

The Courtship today was just a facade of forged play, it is an insult to the judiciary, who had dozens of Court Orders to bring him to Court and get justice for Miguna. But the state, these gentlemen deported him, they detained him on unknown location, they took him hostage and sent him on a plane. They have done that twice. They even made parts of JKIA M.I.A and that is special. Like Miguna was magician who could suddenly create all sorts of troubles with a passport, a phone and his hat.

With all finesse and attitude, the Kenyan Government needs to grow a pair, need to structure itself right and get a reality check. The balances and the ignorant state of affairs cannot continue. The contempt and the ignorance of the Courts, is the reason, that the Jubilee and their top-dogs are acting with impunity. They are not caring, but showing-up after the man is deported again. He is again a ghost in courts.

You can wonder if Miguna is the grandest thief, the biggest cartel boss of Kenya, even if he smuggled all sugar and drugs out of Somalia to run for governor of Nairobi last year. Because, surely there must be more valid reasons, more concerns and more underneath, if the three gentlemen would do this charade, unless they are three stooges of Kenyatta and Ruto. Who are playing forged games by Cambridge Analytica and trying to figure the pulse of Kenyans. To see if they care about a citizen losing citizenship and being deported. FYI: they do. They feel insulted and so should you.

This is not fun and games, this a sad reality. It should have been otherwise, but it isn’t. The State doesn’t give a damn, they are violently and aggressively taking their own. They are sending them away. Not giving in.

Miguna didn’t deserve this, neither did anyone else get the state sanctioned violence during the campaigns, the post-election from the police or the government. But they did, because they don’t really matter. Not like the President do, who has a motorcade passing Mombasa Road yesterday with 38 cars. Not all of Kenyans are that wealthy, they are kidnapped and lose their citizenship, because of your rule.

The world knows this now and your loyal minions are serving that will, taking away everything from the people who doesn’t matter to you. It is evident. Miguna is one of them, first of many, who knows who else will be kidnapped and taken away, lose their rights and lose their place in the Republic. Who knows?

Only Kenyatta and Ruto does, because they orders this mess. Peace.