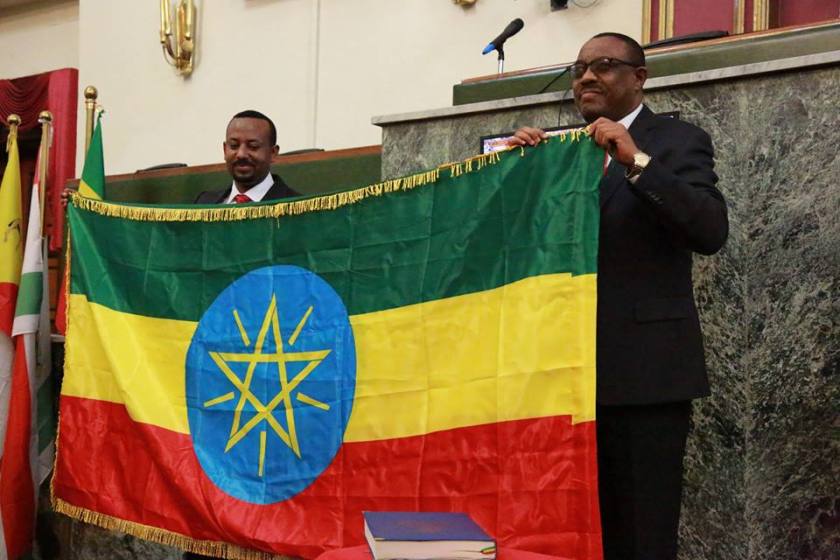 I want it all to go well, we all want to see Ethiopia prosper and be friendly with its neighbors. We all wants to see that, that the farmers get their deserved pay for their harvest, the traders their value of the products and the right price on the exports before leaving for the ports of Djibouti or Somaliland. That is natural. The Federal Government of Ethiopia has to deliver that, the government of Ethiopian People’s Revolutionary Defence Front (EPRDF), the coalition government with a new Chairman and Prime Minister from today on.

It is now official, the Oromo People’s Democratic Organization (OPDO) get their leader on top of the coalition party, that is Dr. Abiy Ahmed Ali. The other parties get other positions and also, there has not been changes in the parliament or within the Council’s of Ministers. Therefore, the only change has been the head and not the hierarchy. The EPRDF is still the same, but with a new guy on the top.

His speech today was powerful and refreshing, the words and prospects are golden, they are vital, but will he act upon them? Will the new Prime Minister challenge the Command Post and the Military, who are occupying the provinces with military forces and taken away the liberties and democratic freedoms. Therefore, if the speech should have any value, the new PM has to act and do it within EPRDF. Which will be interesting, as to see if he is allowed or controlled. As it is easy to speak, it is to write, but harder to sanction or even enforce changes. Especially if it cost for certain parties.

“Dr. Abiy also said that this power transition is a historic moment in the country. Disagreements are not the result of disagreement, but they are the result of better understanding when it comes to understanding the principle. As the democracy does not originate from the government, it is considered to be a solution, “he said. Prime Minister Dr. Abiy Ahmed said that the right to freedom of expression, assembly and association should be respected by the constitution and that public participation should be strengthened. He said that they should not seek to interfere with the rights of others to demand a democratic right. In order to achieve the rule of law in our country, democracy and the rule of law will prevail, freedom and justice will be realized” (Ethiopian Broadcasting Company, 02.03.2018).

This is promising hopes and changes from the government, who has used all techniques, all use of force and taken away all freedoms of the protesters, detained thousands of them, killed numerous and who knows how many ended up at the hospitals in the provinces. Therefore, the civilian casualties made by the state fighting their own citizens, has to stop, the military siege of Amhara and Oromia has to stop. That is a serious change of pattern, secondly stop the road-blocks, the stop of suspension of a political gatherings, all rules and regulation made by the fresh State of Emergency. That is if, the EPRDF are serious about the words the PM said.

The provinces has to see this, it is well thought of speech, a speech of hope and of promise. But the words will fall flat, unless he works upon it. Take talks with the stakeholders, have community meetings and meets with the groups whose been seen as terrorists and anti-government. When, they are really just working for their own liberty and freedom. As the government has oppressed and been besieging their homes, and their lands.

That has to change, if his rhetoric is a mirage or a make belief, or if he is the real deal. The citizens deserves that, the great nation of Ethiopia does so too. But will the new PM deliver or will the Council of Ministers stop him? Will the other Committee’s overpower him? Peace.