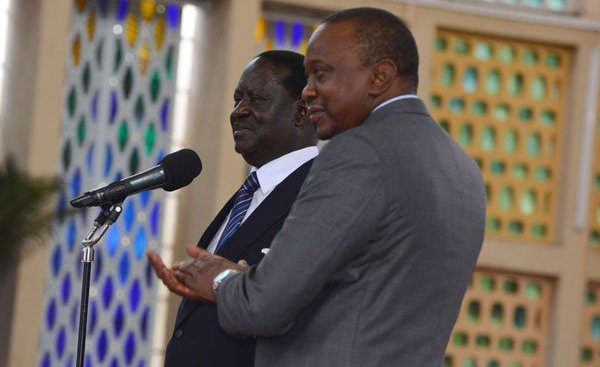 I’m disappointed, I’m fatigued and amazed by Raila Amolo Odinga, I hope that he would reach Canaan, that National Super Alliance with the Co-Principals would survive and become something of juggernaut, changing the paradigm and not let two dynasties, two united dynasties just continue wreck havoc, that is how feel about today. That Uhuru Kenyatta won is evident after the Agreement or Pact, even if wasn’t supposed to support any talks before 2022.

That is what the Jubilee has said since the Fresh Presidential Elections in 2017. That they don’t need talks between them. Since the Jubilee had the Supreme Court ruling in favour November 2017. This made the Independent Electoral and Boundaries Commission (IEBC) and their counting official. After that the October 26th Elections has been scrutinized and that with reasons. The same that happen with the 8th August 2017 elections, which was the reason for the 26th October Elections. Still, I don’t trust the IEBC to handle anything, since they cooked the numbers to fit Kenyatta in the last round.

Seemingly, now, the dialogue and the agreement has sealed the road to Canaan, the ones resisting and the ones defying the state. Have now lost another reason, since Kenyatta has gotten the edge now. He has conquered the opposition and made sure Odinga will follow suit. The two dynasties has tricked out the system. Making the demonstrations and the deaths following the elections pointless.

I feel sorry for all the people who lost their homes, the people who were raided, the ones loosing their lives and the ones who was hurt in the post-election protest on either side. They were all pawns in the eyes of Odinga and Kenyatta.

I am disappointed that it ended this way, I should be happy they made peace, but the ones that lost is the hard-core NASA supporters, the ones who stands for free and fair elections. Odinga validates the man who has stolen the elections away from him. Odinga has now accepted the cartels and the looting of the Jubilee.

Still, the evident of giving in and not walking through the desert is proven now b Odinga. Odinga wouldn’t sacrifice more and spend more time questioning the legitimacy, as the foreign envoys don’t give a damn about his grievances, even the rigging and the ploy of power made by Kenyatta. This should be known, that the supporters of Odinga should feel played today.

Odinga is practically a giant Thirdway Alliance, there are no reasons to think otherwise. Since he signed off his future and legitimate issues with the state. A state that has called him out and said he was a criminal. Still, Jubilee has acted in vile contempt of the trust of the people.

I am disappointed, I should be happy, but I am not. It is betrayal of the cause, the cause to justice and elected leadership. Not rigged in and people taken the people for granted, by a man saying he didn’t even need people votes. The representatives has duped the people here.

I have officially given up Canaan, that because of the agreement between them. Odinga called peace and not given into consideration the ones who was ready to be on the barricades. The ones in the battlefield for him and stood there watching while the police was attacking them. They wasn’t attacking him, but attacking his supporters.

That is why it is devastating today, that is why the Canaan dream is now gone. It is up in the thin air and without any possible destination. The opposition for now is history, the NASA project failed and Odinga took the final bullet. The only winner today was Kenyatta. He mocked them and tricked them into a corner.