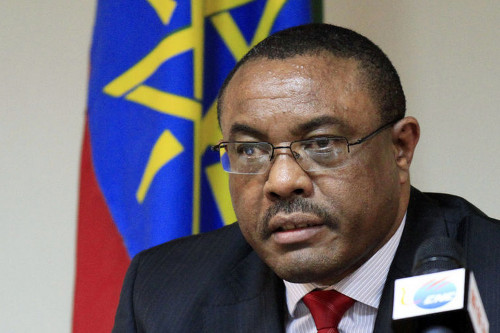 Just as the Zone 9, journalist Esikinder Nega and Oromo Federal Congress leader Bekele Gerba has finally been released from prison. Just as this is happening and the three day shutdown of Oromia. As the dozens of political prisoners are still lingering in jail and the TPLF infused government under Ethiopian People’s Revolutionary Democratic Front (EPRDF) Prime Minister Hailemariam Desalegn resigned on national TV today.

We can wonder what is happening and what is the motivation for the change, since the TPLF and the EPRDF under Meles Zenawi was relentless and oppressive, it has been so under this PM too. No denying that and therefore, the civil unrest, that even led to the State of Emergency last year. With all the arrests, detentions and illegal activity from the state to control the regions, where the people are rising up against the minority government in Addis Ababa.

That the Aghazi Squad and the military offensive in the regions hasn’t hurt the drive to demonstrate. Shows the encouragement and the tiredness of the Central Government. That they have taken it too far over time and not been servicing the area. Which is why the roadblocks and closing the delivery of produce to Addis Ababa has hurt the bottom-line for the regime.

I am starting to wonder who will follow the PM and get both his position, but also the chairmanship of TPLF. Because both are important leadership roles in Ethiopia. We can wonder what sort of negotiations and ambition, which is within the Executive Committee of the EPRDF and TPLF. Also, who wants to come from the Central Committee as well.

Seyoum Mesfin might have his ideas, but the bridges are burning, while the Oromo and Amhara protests are bearing fruits. They are hurting the Central Government and their leverage. They cannot just punish and pursuit violence to silence them. The protests and closing of business, the roadblocks and the University uprisings shows the government who are in charge. This is something they cannot deny.

However, I wonder who will take charge and become the next leader. Since PM Hailemariam Desalegn has now suddenly stepped down. We can wonder who pulls the strings and why it happens now after three excessive days of demonstrations and big political prisoners freed. This is all good news, but how good. What is the next move and when will the thousands of prisoners become free from the shacles they are in?

We have to ask and wonder. It is important and proves the power of the Oromia province and Amhara, as they have used their protest to show Addis that they matter. In addition, they do. No one can say otherwise. Demeke Mekonnen Hassen are expected to follow him, but that is surely depending on the CC and EC decisions in the coming days. Also, Michael-Gerbe Debretson, who also possible take his place, even if the odds are bigger on Demeke, then on Michael-Gebre.

So who knows, it is just speculations, but there will be changes and we can wonder how different the new leadership will be compared to the old. Will it be positive reforms or even more oppressive? Will the TPLF listen to other voices or will they be behind the barricades throwing grenades?

We can wonder, but we do know that the PM is important for how the leadership will act towards its citizens. We have seen the change from Zenawi to Hailemariam. It hasn’t been the same, therefore, the next one will be vital for either more protest or more reforms. Peace.