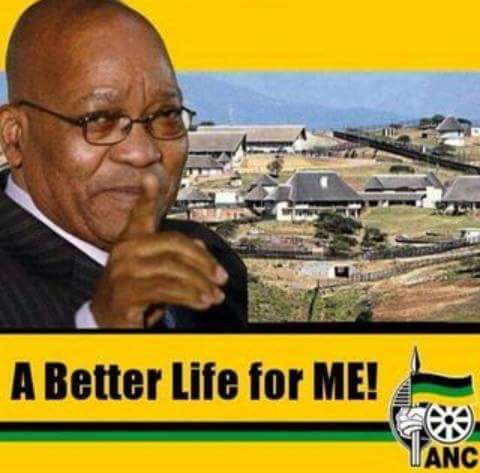 It is just a matter of time now! Before we see the end of the Presidency of Jacob Zuma, the man who brought down Thabo Mbeki. He himself, who was fired by Mbeki, used that and his alliances with the Unions to force Mbeki from the Presidency. Those we’re the days, it seems like decades ago, but it isn’t longer back than 2008. Later in 2009 when the first term of Zuma begun after the elections. So now, the African National Congress (ANC) are turning on him, the way it turned on Mbeki.

It is not as if Zuma has been in sheltered universe and the rest have been oblivious, however, the recent acts has occurred as the power has shifted from him to Cyril Ramaphosa. That is natural, as the same happen when the former Deputy Zuma came into power as well. He should have known this, since them at one point called Mbeki a “lame duck”. That is not an admiration, but a denying of the powers that Mbeki used to have. The same sort of thing, the interview and public display shown by Zuma.

Zuma is stuck and righteously so, if the Parliament is dissolved after the motion filled by Democratic Alliance (DA) or the No Confidence vote by Economic Freedom Fighters (EFF). That is the world to know; also, the ANC has tabled a No Confidence vote, so tomorrow, we might see a push and the gates closing for Zuma. He has enough blood and enough wounds created over the years of looting and corrupt behaviour. His business and perceptive use of family to interfere in State Owned Enterprises is really hurting the economy. Therefore, it is not as if his legacy is smashing. The Gupta’s and Zuma’s are so connected that it is not even a con, but an open-air bazaar of festive eating of the government plate.

There been revelations by Whistle-blower’s all over the map and in any sort of institutions from Eskom to Ministry of Agriculture, that the state has misused funds and secure profits for Gupta based companies. While Zuma’s family and close associates has eaten of the plate and dined on the bill of the same companies. It has been a favourable trade and the Zuma has gotten a lavish house in Dubai and in Nkandla. They have rigged bank accounts and used public tenders to whatever to gain kickbacks; even changed Financial Minister is to suit the Gupta’s. Everything has been for sale; therefore, the legacy of the President is just corruption and more corruption.

However, the ANC and the ruling regime let him stifle the courts, stop the reports of corruption, they tried to keep secret and silence the audits. They did whatever they could to stop it and reveal the ill-gotten gains. Even if the State Capture happen, the Police and the Investigation units was stopped, the Courts wasn’t respected either, neither following the Constitution to prosecute or indict. What Zuma should expect and the Gupta’s, are the bracelets! They should expect to spend time and pay fines. Maybe even foreclosure and declare bankruptcies. Because of the lack of back pay. This sort of thieving should hurt and especially this level of crimes done in broad daylight over years.

So now, it is his turn to feel the punishment and the whole is the stage. The tide has turned and now it is against him. The evidence and the cases is built up against him. If he will turn other people in and fellow loyal ministers, members of parliament and business associates, it is hard to know. Nevertheless, he did not do the crime in a vacuum. He did it on his accord and within his resource. However, ANC was in on it and accepted it for so many years. They defended it too, until the end.

Therefore, we will see how this goes, but Zuma will cry and shout. He will not go softly, since he loses power and lose favours. He was not prepared to step down and lose the Executive Branch, which now is fading away. Peace.