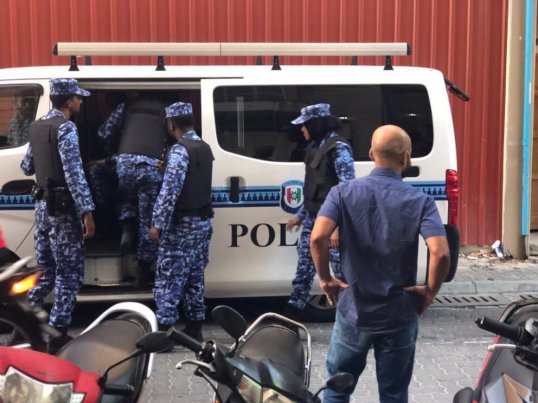 “Parliamentarians to be framed for planned arson attacks throughout [the capital] Malé”, says MP Mahloof

President Abdulla Yameen created a police state and a dictatorship, as he has interfered with the Supreme Court. Since he has not respected the Supreme Court that freed several of Opposition MPs and former President Mohamad Nasheed, who are in exile in Sri Lanka. Today Opposition MP Faris Maumoon was re-arrested again.

Other arrested was Chief Justice Abdulla Saeed. Supreme Court Judge Ali Hameed was hospitalized. Clearly the state doesn’t care about their own. They only serve the President. As the President Yameen ordered the State of Emergency on the 4th February 2018. Today it’s the 6th February 2018 and the President has no put the State of Emergency to the Parliament, which has been suspended. Therefore, another pile of proof that legality and rule of law doesn’t matter at this point. Maybe why the President is still arresting opposition and judges who has followed the Constitution. So we know that Attorney General Mohamed Anil are not following the law either.

There are reports of secret movements from allies of Yameen. Like in Male’s main port there are arrival of Chinese Arms to the government. While there is also insider reports of Pakistani Naval Vessel into Maldives sea. That is happening while former President Nasheed asked for military help to oust Yameen from India. Therefore, the international interference in the midst of the crackdown is appearing. That is happening as the government didn’t want any dialogue with European Union Envoys, neither wanted to go to India for dialogue. That is sign of where Yameen has gone for alliance in the troubling time. The Indian government has suspended Visas for Maldivian citizens and also arrival for hospital purposes. Therefore, government personnel are hit by this and has to go elsewhere for health care.

So after the Supreme Court was assaulted and the judges arrested. There was a revision of the previous order, as the Maldives Embassy in India proclaims on the 7th February:

“The Supreme Court today revised the ruling and nullified the points in the original ruling that;

So the people who was freed has suddenly gotten their fortunes turned, but that was expected after the Military and Police has assaulted the Supreme Court and the Judiciary. So many has been arrested and hospitalized. That is showing that the 1st February 2018 ruling was a danger for Yameen. Since he couldn’t stomach being question by the Constitution or the Courts who was respecting the law. Now they are continuing the crack-down and taking all power in his own hands. The international interference in favor of Yameen is also a worry. Since that is strengthening him and his fate. That is sealing him and making sure he becomes more vital. Especially, since the India doesn’t need more conflicts with Pakistan or China. They are already on edges because of other spats and border disputes. Which, could be escalated because of alliances and justifications to interfere in Maldives.

However, I have already scrutinized the State of Emergency, as it again has broken with protocol, as the President first didn’t have any of the reasons behind it and has now not had the review of it at the Parliament or the Majlis. This is proof that Yameen has no intention of running after the law, but creating the law for himself. That is why he interfered in the Courts and revised the Ruling of 1st February, that put forward this new crisis. Because Yameen cannot manage or stomach either the No Confidence vote in Majlis or the freedom of his opposition. He is a weak leader with an army and powerful friends. But he doesn’t understand the Republic’s Constitution or the rights of the State.

You know that Fitch is showing where this State of Emergency is really hurting the Republic:

“The government’s fiscal position is also sensitive to tourism. More than one-third of government revenue comes directly from tourism and some of the revenue-generating initiatives that underpin the government’s fiscal consolidation strategy are also tied to the sector. The government has been attempting to bring down the budget deficit from -10.4% of GDP in 2016. Fitch assigned the Maldives a sovereign rating of ‘B+’ in May 2017. This was one notch below the score assigned by our sovereign rating model, reflecting low reserve coverage in combination with high dependence on one sector and an expected accumulation of external debt in the next few years from the execution of large infrastructure projects” (Fitch Ratings – ‘Fitch: Maldives Unrest May Test Economic Vulnerabilities’ (08.02.2018).

So the sensitivity is now hitting Maldives as the Chinese, Indian and United States has given stern travel warnings to their citizens. That must hit the tourism industry, as they need the foreign exchange and funds it brings.

This is happenings as the State of Emergency is used to obstruct party meetings of parties like MDP who had a meeting at the campaign center Haruge. While there is reported that former President Abdul Maumoon Gayoom been moved to the Maafushi prison.

You know how far the state has taken it today as this is reported to:

“Maldives security forces threaten to take action against any media that broadcasts content that might be considered a risk to national security. This announcement comes at a time where Raajje TV has asked for protection against threats to torch the station”.

With all this information. You can see that the information from Maldives is worrying, even if Yameen trying to make it look better. As he is sending envoys to Saudi Arabia, Pakistan and China. We can wonder what is his plans with this, as the Maldives had already said they wouldn’t send to India. But however, the Maldives are saying they are sending anyways. That seems like damage control.

We have clearly seen that the Constitution and Rule of Law doesn’t matte to PPM or the Yameen government. President Yameen has interfered with the Judiciary and with the Parliament, as well as the public. With assaulting the two important arms of the government to secure his own position and worry as the Supreme Court judges was arrested and judiciary employees. Also MPs and others has been taken. The President want all power and not being questioned. Therefore, he didn’t accept that Nasheed also was freed by the Court on 1st February 2018.

Yameen has within a week destroyed his legitimacy and his ambition. He has shown his dictatorial side, his totalitarian side and his oppressive rule. Rule of Law has diminishing as President Yameen has proven his true identity.

Legitimacy and rule of law is gone, because of one ruling that questioned the judgment of the President. Peace.