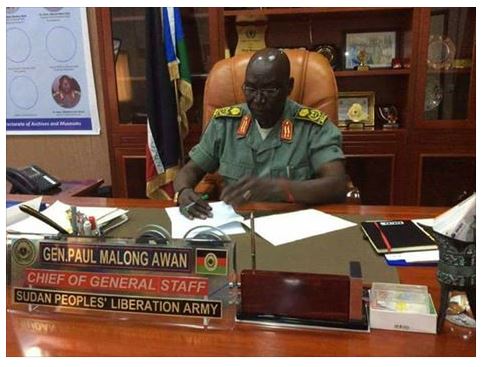 The government has escalated its move against my father Gen. Paul Malong Awan by removing his privileges

This afternoon my father was informed he must release his body guards to their units, surrender his cellphones, guns and that all visitations of any kind to him including those from family members children and wives are not permitted except with approval from the authorities.

This message was delivered by Lt. Gen. Magar Buong Aluenge on behalf of the SPLA Commander in Chief and the President of the Republic of South Sudan, Gen. Salva Kiir Mayardit. Lt. Gen. Buong was accompanied by the Director General of Military Intelligence.

Since we are all in the dark on the reasons behind this escalation, I am informing the public of this move to ensure that they are in the know in case of further escalations.