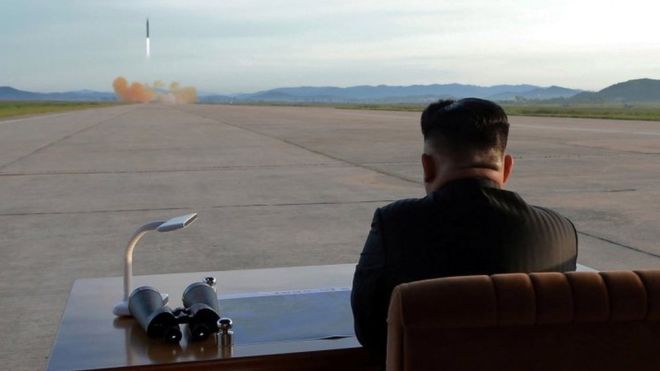 Yesterday, the North Koreans sent up another rocket to the sky, again the Japanese sent people into shelters and made sure they we’re safe. The rockets could have hit one of their islands. The South Koreans are getting more worried as the Democratic People’s Republic of Korea (DPRK) and their President Kim Jung-Un continues with missiles and launches. The extensive works and promotions of their arms development should worry.

This is just as the KCNA today issued this news:

“Pyongyang, September 16 (KCNA) — Trump announced that they would sell off weapons worth billions of U.S. dollars to south Korea. And he allowed Japan and south Korea to increase the quantity for buying U.S.-made military equipment. Timed to coincide with this, a spokesman for the White House at a press conference said that now is not the time to focus on the dialogue with north Korea. Minju Joson Saturday in a commentary says that Trump’s behavior goes to clearly prove that he has neither will nor ability to defuse tension on the Korean peninsula but he has only merchant-like calculation to use the aggravated situation as a golden opportunity for making money” (KCNA, 16.09.2017).

So the state propaganda is in full-effect. The North Korean are ready to blame everyone else for their activity. Not looking within itself and wondering, if they we’re shooting up less missiles, the United Nations Security Council wouldn’t have reasons for sanctioning it. Neither would United States has to sell and help Japan and South Korea with missiles defense like THAAD System.

The acts of North Korea is the reasons for the tensions, also the words of President Trump. Because he has sounded like warmonger, who is ready to send battleships and make another Korea-War. Since it went so smoothly during the last Korean war. President Donald Trump needs a repeat of that, this time hire his friend Eric Prince and his company to send mercenaries to the Korean Peninsula. That would be nightmare, not only for President Kim Jung-Un, but for all parties in the South East Asia. Nothing good would come out of it.

But North Korea if it shoots down a boat or hit land. Actually kills someone with a missiles, even if it was an exercise and just trying new technology. It might spark something unheard of. As long as life is not lost and the heads of South Korea and Japan, are keeping their cool. The warfare will not start. The loss of life will not happen. But the more you play with fire, the more likely someone is actually going to get burnt. At this rate, its just a matter of time.

President Kim Jung-Un does this to spread to fear and awe. But it is not working outside of North Korea. Even if China is peaceful and want to continue with cordial relationship. Even if South Korean government don’t want war, they still wants their citizens safe without fear of tomorrow, the same can be said by Japanese. The United States are there to support allies, but if they are really hit. Will the US put troops and bigger guns on the ground?

We can hope for dialogue, for debate and for negotiations, so that the North Korean doesn’t continue to shoot. That they hopefully doesn’t suddenly hit Seoul, Tokyo or any other place where millions of innocent people lives. North Koreans can with the right type of hydrogen bomb or other device really do lots of damage and hurt. The world doesn’t want to see that. Just like the rest of the world, this part of the world don’t need a war. No place needs a war. The Korean peninsula needs diplomacy and possible aid. So that the North Koreans and the rest of world can engage in possible solution to the stalemate. As the DPRK President is fearing for livelihood and life. Therefore he is using fear and missiles to get respect. Peace.