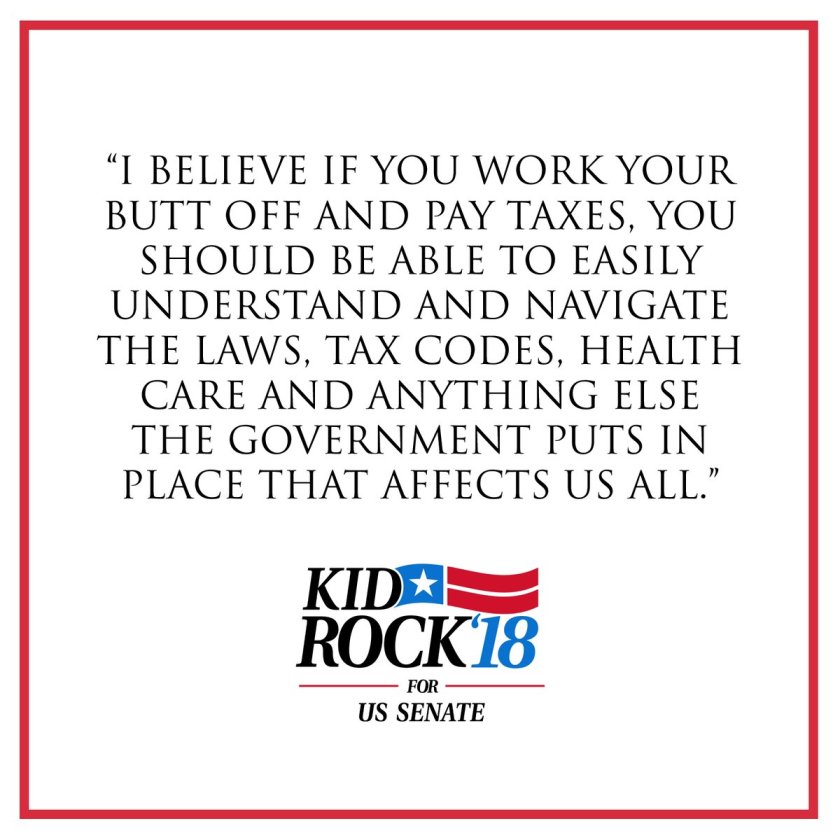 In a not to distant future the world has to all remember the legacy of men like reality star and real-estate supposed tycoon becoming President of the United States, that being Donald Trump winning the election in November 2016. That after a two year stint of campaigning and doing whatever he could become the Commander-in-Chief. That actually happen by all reach of margins off the electoral college and getting the position. So now in Michigan, there is seemingly a new type of race going to happen possibly between the Democrat Senator Debbie Stabenow and against Republican Robert James Ritchie aka Kid Rock.

There are some different reports on Kid Rock’s candidacy, let’s look at them:

“At least since “Devil Without a Cause”—his breakthrough LP, from 1998, which sold more than eleven million copies in the U.S.—Kid Rock has self-styled as a patriotic iconoclast, a rebel cowboy on a rampage against anything effete, élite, or soft. He is particularly enraged by rules or customs that might be construed as infringements on personal freedom, such as the choice to meld rap and rock into a shouty, bullish pastiche. He did not invent the right-wing-outlaw archetype—he’s preceded, in music, by the rock guitarist and N.R.A. activist Ted Nugent, the country singer Hank Williams, Jr., and others—but he nonetheless revels in its actualization” (Petrusich, 2017).

“If Rock is really preparing to run for Senate, it’s news to the Michigan Republican Party. The Michigan GOP has “not had any contact with him at all,” spokeswoman Sarah Anderson said Thursday, “so I can’t speak to the validity of it.” Although the state party does not endorse in Republican primaries, potential candidates typically talk to GOP leaders and activists around the state before launching campaigns. Rock caused an uproar Wednesday when he tweeted a mock image of a political lawn sign and said his website is “absolute YES” for real” (Gerstein, 2017).

“He also responded to incumbent Michigan Sen. Debbie Stabenow, who’d tweeted, “I know we both share a love of music. I concede he’s better at playing guitar and I’ll keep doing what I do best: fighting for Michigan.” His take? “I concede she is better at playing politics than I am, so I’ll keep doing what I do best, which is being a voice for tax paying, hardworking AMERICANS,” said Rock, who hasn’t kept his Trump-supporting ideology under wraps” (…) “ The “Kid Rock for U.S. Senate” website diverts from the typical parameters associated with campaign-affiliated sites in a number of ways. For example, campaign sites must confirm that potential donors are U.S. citizens before completing any transactions” (Czachor, 2017).

Now that we see this, it wouldn’t be shocking in the state of affairs in the United States that Kid Rock would suddenly become a politician. There been certainly a dozen other public figures who became politicians in the United States, even Ronald Reagan was in commercials before becoming President. Therefore, the legacy of the American Democracy would not be destroyed, but would be more of a show. Since the President of the current day is a former reality star and that is showing in his persona.

That this would be a special election in Michigan and the state would certainly become galvanized by such a candidate. As the Democrats knows the volatile state after other election losses of late. Not that the Republicans are Teflon, since the scandals surrounding the President keeps them more hurt and less to show for in their time as majority. Especially considering the devastating legislation’s trough the Congress. This will not benefit a Republican candidate in Michigan and the rest of the Senate races, but a wild-card might help. Certainly, a Kid Rock would be a wild-card and would be something else. After a while, the public see what something does as President and they want to vote for safety instead.

Time will tell, if it is a PR Campaign, if it is real start of campaign as the settling with FEC to become candidate has to happen. Also where he disclose what needed to the state before becoming a candidate. Clearly, he needs also to connect with the Republican Party. If he is not planning to run as an independent. But then the musician turned candidate will work against the two biggest parties. Than, he can’t only run on his celebrity status, but has to show that he is a genuine candidate.

Time will tell if he is a real candidate, who will follow protocol and become a possible senator. If he decides to do so, then the Michigan race will be special for the Senate in 2018. Peace.