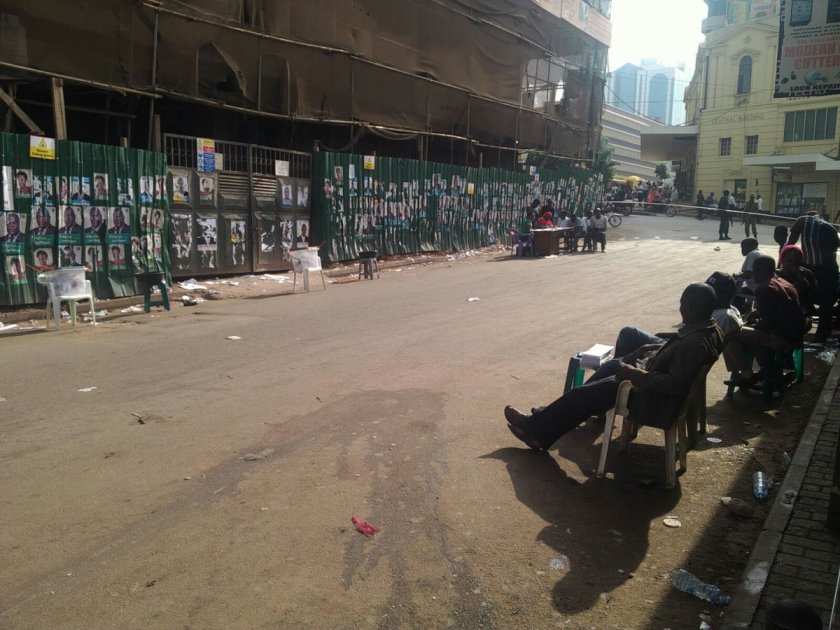 You would think on a day like this as the final rallies in Kyadondo East, which is part of Wakiso District, that the National Resistance Movement and the Police Force would bring peace. But they didn’t, they created chaos and moved independent candidates, as well as detaining them for interfering in their campaign rallies. This is the proof of vicious ruling regime and how the basic freedoms are limited for others, than the NRM elite and the President Yoweri Kaguta Museveni, rallying for his candidate in the district. But it seems strange that he cares, since with all due respect. He didn’t care about their votes in the General Election of 2016, as these areas have been a stronghold for opposition party Forum for Democratic Change and because Dr. Kizza Besigye reside in Kasangati, which is a vital part of Kyadondo East.

“In Kampala and its adjacent districts, the Group observed voting delayed by as much as two to four hours and subsequently observed polling locations where voting was delayed by as much as six to nine hours. Anecdotally, in Kampala, there were several polling stations located within minutes of the premises of the Electoral Commission that did not receive voting materials on time” (…) “The voting hours were subsequently extended in Kampala. However, it appeared that this information was not extensively communicated, as voters and polling officials appeared confused and uncertain of the process. The EC announced that polling would continue in a number of constituencies in Wakiso and Kampala districts the following day. Turnout, however, was low on the second day – which was a working day – and it is possible that many potential voters decided not to attempt to vote, after having waited for many hours the previous day”(Commonwealth, P: 13-14, 2016).

“Furthermore, eight teams across the country reported that polling stations could not open before 10 AM. A number of polling stations, notably in Kampala and Wakiso, had not opened within six hours. Significant delays and a lack of effective communication by the EC fuelled frustration and tensions among voters, with EU EOM observers and media reporting about large crowds protesting against being deprived of their right to cast the ballot. In at least four cases, the police used teargas to disperse voters at polling stations. Only shortly before the official closing of the polling stations at 4 PM did the EC chairman announce the three-hour extension of voting in Kampala and Wakiso district. This was poorly communicated to the polling staff in affected areas, and EU EOM observers reported polling stations being closed at first and only after some hesitation did the polling staff improvise and try to re-open voting sites” (EU, P: 29-30, 2016).

“The EC failed to communicate and declare final results of presidential and parliamentary elections in a comprehensive, timely and transparent manner. The announcements of the presidential election’s preliminary results started while voting was still ongoing in parts of Kampala and Wakiso. The final results were declared within the legally binding 48-hour deadline, but they did not contain data from seven per cent of all polling stations, and therefore excluded some 675,000 votes cast. The EC delayed the publication of the final results broken down by polling station till 25 February and uploaded them on its website in a manner that did not allow for easy access or use. The EC also did not publish the scanned copies of the DRFs online although they were readily available in electronic format, thus further reducing voters’ access to information of public interest and in contravention of the principles outlined in the ICCPR” (EU, P: 3-4, 2016).

“The 2016 Elections witnessed a number of violations of the right to vote, most notably due to late delivery of materials in Kampala and Wakiso districts, described by the Supreme Court as evidence of incompetence and gross inefficiency by the electoral management body. A number of potential voters we’re disenfranchised during the voting exercise, in particular persons who turned 18 between May 2015 and February 2016, detainees, including some pre-trial dententions and Ugandans in the diaspora” (FHRI, P: 25, 2016)

So both, the Commonwealth report, FHRI report and the European Union Observer Group saw the same vast indifference for the votes and voter turnout in Wakiso, the same was seen in capital, but that isn’t where the By-Election is happening now. This proves the lack of care and common sense as President Museveni drives Tuk-Tuk and talk of importance of electing people who serves him. He might say he wants to be challenged in Parliament, but everyone knows that is a lie. Therefore, he detained Bobi Wine earlier in the day and moved him to Gyaza town, so his presence could be in Kasangati and at Szasa Grounds. Not like he could be more ruthless, but surely he would rig these election like he did in 2016. Nothing new there, if the turnout would be meager and lack-lusting that would hurt the old-man. Since he cannot show 90-100% turnout, when there would be no lines of people showing up. Harder to rig just a bunch of paper compared to buck-load, which can be pre-ticket into ballot boxes and look legit. That is how they do, especially under President Museveni. The man who made himself a revolutionary by claiming UPC rigging in 1980s. Such a class-act the President, becoming worse than the ones he toppled! Peace.