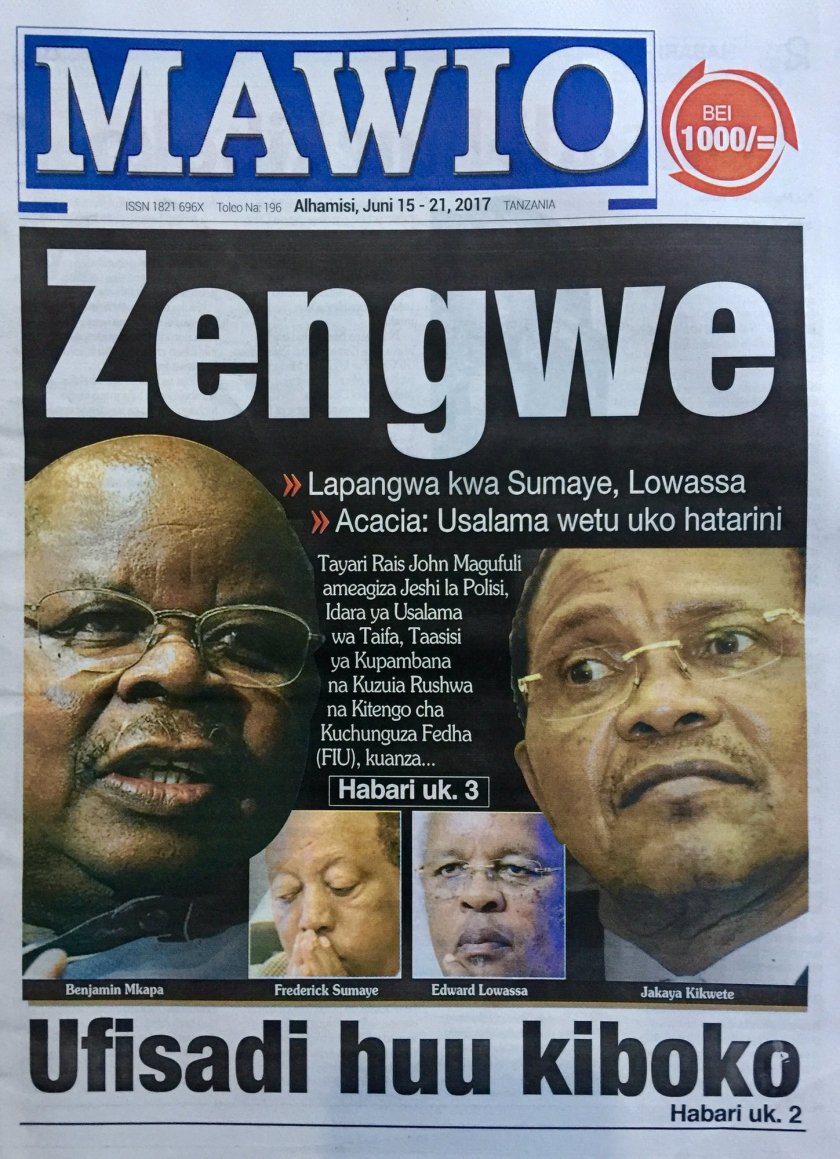 I am writing to you again, it strange how it comes to this. I wonder why it has turned to this. There was so much hope for you. You we’re a breath of fresh air, acted differently and seemed decent. Instead, the power has eaten your soul and you cannot handle critics or possible dossiers.

It seems like you have a little-man complex or power fatigue, as you expected to get showers of confetti and not get rainy days. I know it is weird, but life is usually what you serve it. If there are issues and corruption in the Mining Industry, it isn’t the tabloid paper Mawio, but it is the Mineral Extraction companies and civil servants who are corrupted. You should not have issues with the tabloid journalists in Mawio, they are just telling stories from Tanzania and from the different people that lives there. You should know this better than me, you are the Executive and running the Republic. Let’s take a brief look!

“The Information minister Dr Harrison Mwakyembe imposed the 24-month ban through a statement released to the media by the Director of Information services Dr Hassan Abbasi on Thursday evening” (…) “I have been left with no other option than to use powers conferred to me by the Information Services Act to impose a ban on Mawio from publication for the next 24 months,” read part of the letter from the minister to Mawio editor” (…) “Mawio was accused of ignoring a government directive on reporting of the former presidents. On Wednesday, President John Magufuli warned the media against linking Mkapa and Kikwete to the government minerals dispute with mining giant Acacia” (The Citizen, 2017).

I know you must feel hurt… feel the pain and the sorrow of maybe being involved in possible mineral dispute like your previous peers. I know that the precious heart of yours must be shattered. That this Mawio tabloid paper wrote such a hideous story exposing the current president, you Magufuli are compered with them. It seems like you have lost your heart…

That your heart was shattered, that the deep sorrow are coming over you. Magufuli you need love and passion, as you have so little compassion. As a president your expected to get support and praise, but this is opposite. What Mawio wrote was maybe distasteful of your wished reputation, but if your connected and letting the government do similar as your predecessors. Shouldn’t that be informed by the media?

Seemingly, you are the President and your precious feelings are getting hurt so often. That the press are writing stories and revealing the government matters, which they shouldn’t in your opinion. Well, many would be to differ, especially when try to dig deep, like even a weekly tabloid Mavio did on Wednesday.

Someone needs to give you love, make it compassionate and be a caregiver to you. Since you cannot handle criticism and critic of any kind. As President and as Executive, you should have the heart, have the understanding and handle the media, as they are there to be part of the checks and balances of your work, President!

Your government are weak and pathetic if it cannot handle that a tabloid write stories about it. President Magufuli, I know you need love, lots of it. You need it so much, that if someone now writes against you and your government you hurt them. The Ministry of Information are suspending them on your accord.

Your usually gets what your hearts seeks. Your emotions seems to run a bit hot lately, as over the last few months… you have been hard on the media and journalists for so, so long!

Can someone please… for the love of god and everything holy, give the President some love. So that he can act like fellow brother and not as heinous totalitarian leader, not as the leader people expected you to be!