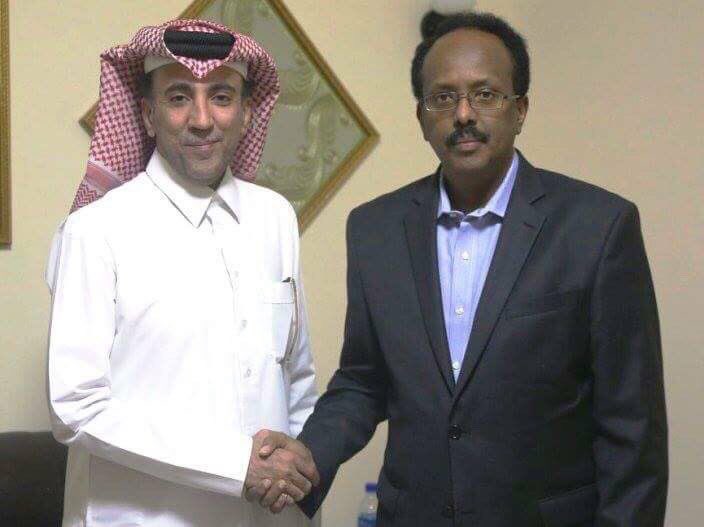 The Federal Republic of Somalia are under continued pressure from the Kingdom of Somalia to cut their ties with Qatar. This happens as Qatar and Turkish representatives are in Mogadishu on talks. While the KSA and Gulf Cooperation Council members are adding threats and sweetening the deals with possible pledges of aid if they do cut their ties.

If the Federal Government of Somalia (FGS) are accepting to be bamboozled by the KSA pressure, as the Somaliland state has already done. This is happening after the Somali delegation who had a meeting in Saudi Arabia, which didn’t go well.

So the neutrality in the conflict in the gulf is tightening up, as the regional aspects seems dire. Since Yemen, Djibouti as well has cut ties. While Ethiopia haven’t formally done anything, but promising a statement. Eritrea doesn’t want to take stand and stay neutral. While Sudan has sided with Kuwait and wishing to support a dialogue between the Gulf nations.

Today, supports of Somaliland said this: “Somaliland interest first; supporting UAE & Saudi is the right decision for our country while #Somalia “supports” Qatar Turkey & Iran” (Somalilanders, 11.06.2017). The Somliland officials has even made directions today on how the cut ties will be put into effect:

“In his post cabinet presser at the presidency in Hargeisa minster Dr Saad Ali Shire the anti Qatar decision was not taken lightly but made after strenuous discussions as pertains the political, economic and diplomatic relations existing between Somaliland and Gulf Countries.

1. The republic of Somaliland fully stands behind the decision taken by Saudi Arabia and other Gulf Countries as pertains relations with Qatar.

2. As from 10th June 2017 nobody without explicit authority form the government of Somaliland princess shall be allowed to this countries airspace

3. Somaliland is fully responsible and in charge of its air, land and sea, thence those securing authority for use of such from Somalia shall be liable to due process of the law” (Hasan, 2017).

This is happening while Farah Maalim says: “Farmaajo is restoring Somalia’s image in the international arena. Resist dictation by Gulf fat cats. Maintain Qatar as a friend regardless” (Farah Maallim, 11.06.2017). So the dialogue today with Qatar, bring the internal problems into hot-air. As the Somaliland authorities are defying the Mogadishu government, the federal government of the republic. This is worrying as all parts of Somalia needs each other as the battles between government and Al-Shabaab continues, as well as droughts regions of the nation.

The FGS doesn’t need defiance, it needs collaborations in it’s quest for better future. The Somaliland decision to work on their own, proves that the power of investment in the port are clearly more important than inner works between all the Somali government bodies. Peace.