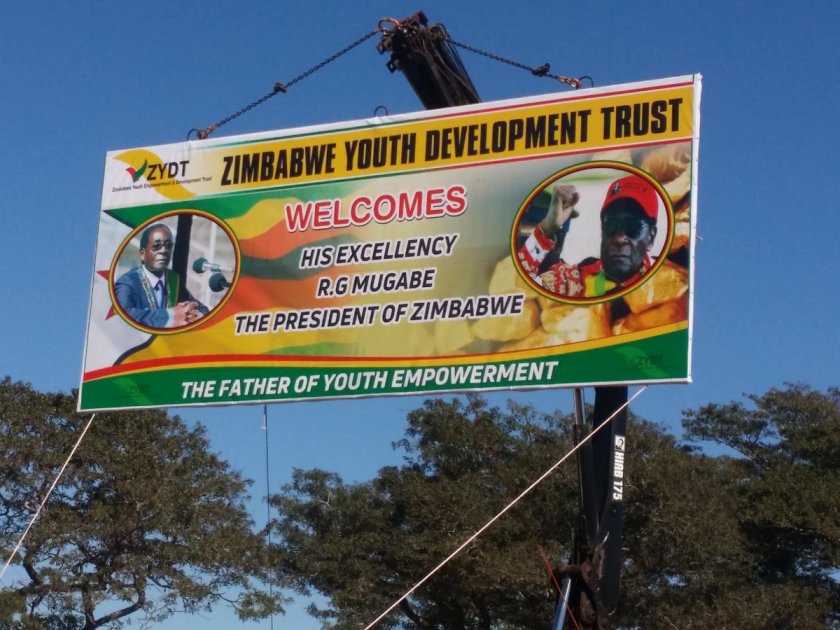 “In heaven there is God, but here on earth there is an angel by the name of Robert Mugabe” (…) “Is he not an angel? Is he not Gabriel? Many of you will be shocked on judgement day when they see President Mugabe holding a notebook adjudicating who is suppose to get in or go to hell” – Kudzai Chipanga

As the President since 1980 in the Republic of Zimbabwe, where the longest serving President Robert Mugabe are supposed to engage the Youth. This is happening in Marondera, where the ruling regime and ruling party ZANU-PF was taking the school-buses and closing the schools, so the youth had to attend the rally today. Also the vendors in Marondera had to close, because the state has subscribed that all citizens and especially the youth had to attend the rally of the President. This is all ahead of next years election, as the 93 years old needs to get the masses behind him. In this rally the Youth League Secretary Chipanga had a powerful speech. Take a look!

Youth League Secretary Kudzanai Chipanga said: “Mash East is a special province. Everything is done the Zanu PF way here. Even when people cough, they clench their fist which is a Zanu PF symbol” (…) “We want to thank you President Mugabe for taking time off your busy schedule to meet the young people. The reason why we opted for this model was the overwhelming attendance during last year’s Million Man March. Some did not even attend” (…) “We want to assure you President Mugabe, you are our life President. Even if you die, we will hold the Politburo at National Heroes Acre. We will support you always” (Chipanga outtakes at Rudhaka Stadium in Mashonaland East, 02.06.2017).

Certainly, it was special that the President who is 93 years old that are supposed to get the Youth vote in the next election. But again, like former Zanu-PF elites has said he is written in the bible and also will run after his death.

Now he is even more powerful that proverbs, he will decide the fate of the humanity at the pearly gates. Decide if 50 Cent or Fat Joe gets to heaven. So you support MDC or parts of #ThisFlag you will not enter. Chipanga shouldn’t be ZANU-PF cadre, he should be pastor at some baptist preacher. That Mugabe is supposed to rule for life and it is justified, since he will even decide after his life ended as well.

ZANU-PF needs help, especially the Youth and also the ZANU-PF leadership that praises the old-man and puts him into weird biblical fiction. Where he rules after death and puts him into the psalms. There are no clear evidence of this. The dictatorship is taking the phenomenon of Mugabe a bit far. As the support shows how little value of the state there is, when everything circles in and around Mugabe. The total control of the Zanu-PF elite is overwhelming and cannot be right.

President Mugabe, will not have a notebook at the pearly gates, neither is he in the bible or deserving the support after death. He doesn’t even deserve it now, as he has had control over to many decades. Mugabe is clearly reaching too far when he pushes the agenda of the youth as he is 93 years old. But Mugabe is not in the psalms or at the gates. He will just be buried like the rest of us and God will determined his fate. Peace.