Mama Mabira gone Yellow – In a 2 year period gone from FDC to Go-Forward and now to the NRM! 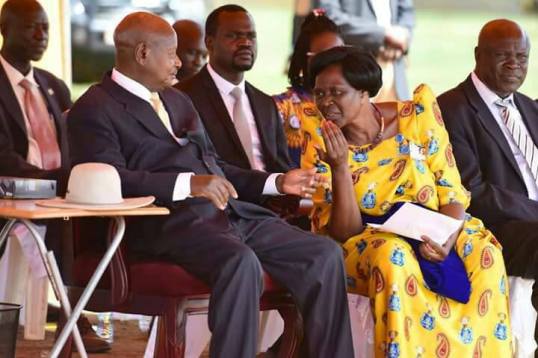 “President Yoweri Kaguta Museveni has this afternoon attended the thanksgiving ceremony of the Kitgum Municipality Woman MP Beatrice Atim Anywar at Boma grounds. In his speech, the President said he was happy Anywar had survived three accidents” (…) “For the past 10 years, Anywar’s attitude has been changing positively. NRM should do what Jesus told people to do, become fishers of men. I’m here to see if I can fish Anywar and all the other fish in the lake,” said President Museveni (New Vision, 26.05.2017).

You can sometimes wonder why someone is loyal or cares about their affiliations, as this weeks evidence, the full-circle of disloyalty and money hungry politician is in full-affect. This from the woman who delivered back to Parliament back-in-the-day a Ushs. 20 Million shillings to Parliament in 5,000 notes. She is the ones who has fought tooth and nail against the government to save the Mabira Forrest from foreign investors to build sugar-cane plantations and a sugar mill. Therefore, her stride and passion has surpassed many of the current incumbent Members of Parliament. That is why the betray of the Forum for Democratic Change is even more despicable, even if it has been in the works over the last 2 years.

Kitgum MP Beatrice Atim Anywar is on her fourth term in the Parliament, she has been before shadow minister and also been arrested during the 2011 Walk to Work demonstrations. She was questioned and even detained at some points of it. So it is not like her political life has been easy. Still, because of this knowledge and knowing what President Museveni does to his opponents, you would think that these people wouldn’t be eaten by the envelopes. Surely, the missing funds for her last foreign treatment. Might be reason, as she has been unlucky and has survived three bad-car accidents. So, she has gotten more pain and with that plenty. Certainly, a man can understand the payment of doctors fees and the sudden help can change a persons affiliation. Especially since she was kicked out of being FDC Treasury, also had to go independent because of her loss in the FDC Primary in Kitgum. Therefore, with her alliance with Mbabazi and the The Democratic Alliance (TDA). She stood more alone, than together with the Besigye/Muntu and Mafabi party of FDC.

To give you a brief timeline:

In November 2015, Beatrice Anywar had another tone:

I am a fighter. I fought the Mabira war and won it.

On the 2nd November 2015 the FDC Stalwart Anywar was the one proposed and delivered the papers of Mbabazi Presidential Aspiriant to Electoral Commission Chairman Eng. Dr. Badru Kiggundu at Kololo. She was also one the first key figures rallying at the Nakivubo Stadium on the Presidential Candidate Nomination Day of Go-Forward and for Amama Mbabazi. This was on the 3rd November 2015. Then she followed and was also part of the AmamaTrail, like at the rallies of Mbabazi in Mityana on the 11th November 2015. Beatrice Anywar was clearly involved directly with the Go-Forward and the TDA in its hey-day. While in the 30th November she was joining again the FDC Team when they we’re trialing through the district of Kitgum.

“FDC yesterday maintained that Mr Denis Okalit was the party flag bearer for the Kitgum municipality MP seat even as Ms Beatrice Anywar made last minute attempts to persuade the party to reconsider the decision. The party endorsed Mr Okalit last Friday as its flag bearer despite a petition by Ms Anywar against the decision. The party accuses Ms Anywar of supporting presidential candidate Amama Mbabazi’s candidature. Ms Anywar seconded Mr Mbabazi’s nomination but the party says she acted outside the party laws” (…) “Gen Muntu said the party was facing several challenges in different parts of the country following the party primaries but said everything humanly possible will be done to resolve them. “Mr Okalit is the one with the party ticket. Ms Beatrice Anywar is running as an independent. I was telling party leaders in Kitgum District that whoever they choose to support, they must not cause confusion during campaigns because after four months, the party has to remain,” Gen Muntu said” (Kafeero, 2015).

So her misconceptions during the early campaigning as she claimed to be FDC, but working for the Go-Forward, while also being Independent MP candidate in Kitgum. Clearly shows that she was on the ways to greener pastures and hoping for yields in the Go-Forward/TDA umbrella, instead of the FDC. She got elected into the 10th Parliament and was sworn-in as Independent.

Months after being sworn-in as independent MP, she proposed on the 30th May 2016 a power-sharing agreement between Dr. Kizza Besigye and President Yoweri Kaguta Musevei. Something that was just talk, but clearly she figured something out. Certainly since the election she needed to see where she could get loyalty. As her role as independent and supporting Mbabazi had backfired. Go-Forward didn’t really go as planned for the politician. Therefore, she had try to create another fix. Since she still has linkage to FDC, while trying to mediate with Museveni. This has certainly happen in the shadows, as the President will really listen when he thinks he can get his way. Than we fast forward a year. As she doesn’t make any significant sway of leadership or change of position. Other than again, falling unlucky, having a car-crash, which she doesn’t have the money to pay the hospital bills. As she will get treatment in India. This is happening in April 2017. As the bill of charge grows and how it get paid. Is not known, but on a separate note, the wife of Mbabazi got paid by the state for her overseas treatment in 2017. Therefore, it is most likely that the Museveni footed her hospital bills in India.

While the time lingers, the evidence of her needs of funds and help is clear, as the rumors was as the Oil Cash Probe or the Presidential Handshake hit a high point, in early May 2017. She was rumored to have visited the President at the State House asking for her own funds. Beatrice was one out of a group asking and begging the President for money. This was big news around 1st May 2017. And not strange concerning the rumored and alleged paid funds for her hospital bills in April 2017. Whey you know this and she has a thanksgiving ceremony in Kitgum this 26th May 2017, where the fountain of honor is President Museveni. You know the political affiliation is now towards the Movement and the President. Honorable Anywar is now officially affiliated with Museveni and his party.

This has happen over the last two years, as she lost the FDC Primaries and had to find other homes. Tried in Go-Forward. That didn’t go well, and now she has found shelter in NRM. As the founding member of FDC, and that she was adamant of being apart of FDC while running for a new term in office. Therefore, the stages of disloyalty is clear in the sand. The recognition of it and the questionable will of her can be in doubt. As she was a harsh critic of Museveni’s ways and his attack on the Mabira forrest, but now in these days sh can be parts and even wear yellow. The whole world can see and learn by the Anywar case. How dirty and how the politicians can change camps to gain cheap popularity. Therefore she even went on the rallies of both Mbabazi and Besigye during the campaigns of 2015. You can wonder how she plans to do it in 2021 and in 2020. To gain another term in Parliament, as she clearly are now loyal to Museveni and his cause. He even praised her like he did with the Good DP Mbidde and Mao.

This story will only continue and the proof that the envelopes of Museveni has power, more than his ethics, his control of society and his demands of no scrutiny into his backroom policies. That is clear to loot the state reserves. Now, Mama Mabira, the former strong opposition leader, are now marginalized over a little help. All of her history of the past vanish, even if some remember, that will be gone as her newfound home destroys her former attacks on the government. Just like the record of Beti Kamya is also wrecked. Peace.