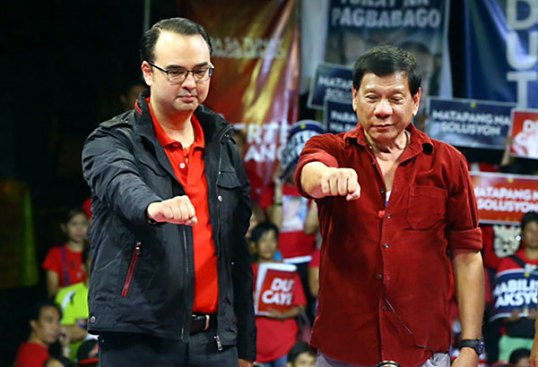 “Freedom is the freedom to say that two plus two make four. If that is granted, all else follows.” – George Orwell (1984).

Another former sore point in the Republic of Philippines. This being the critic and the internal squabble of internal affairs by foreigners in the Republic of President Rodrigo Duterte. These has been the United States of America, Spain, European Union and others. Now the President stands up to them, also as the power-shifts to other alliances and diplomatic partnerships. This is certainly knew to a few, but since the first days in office, even President Obama got a mouthful for the interference in the internal issues and military operations in the Philippines.

The United States and European Union have been critical of the President Duterte and his administration. Therefore, that the Duterte Administration acts now upon the European Union warnings on the Extra Judicial Killings in the Drug War is expected. That is because the European Union want their donations and their grants to have more power. This is what worries Duterte and his administration, as they want to continue their popular work in Philippines. That is the reality, even if it is controversial and the methods seems rough. The Philippines and the public are understanding why President Duterte uses those sort of Police tactics to undo the controlling drug-lords and cartels in the Republic. But take look at the reporting!

“A government source privy to the meetings said administration officials agreed to preempt any move by the EU to cut off aid “by refusing to receive it.” Malacañang on Thursday said Duterte had already approved the recommendation of the Department of Finance to reject grants from the European Union that “may allow it to interfere” in the country’s internal affairs” (Bencito & Ramos-Araneta, 2017).

Abella explain the cutting of Grants:

“The Duterte administration announced yesterday it will reject new grants from the European Union (EU), possibly forgoing some 250 million euros or roughly $278.7 million in funds for development projects in the country, particularly in Muslim Mindanao” (…) “The President has approved the recommendation of the Department of Finance not to accept grants from the EU that may allow it to interfere with internal policies of the Philippines,” presidential spokesman Ernesto Abella told reporters at Malacañang” (…) “The Philippines reserves the right to accept loans and grants that help attain its objectives of promoting economic development, inclusiveness, and reducing poverty, attaining peace within its borders and with its neighbors, and fostering a law-abiding society,” Abella said” (…) “It also reserves the right to respectfully decline offers that do not achieve these goals and offers that allow foreigners to interfere with the conduct of its internal affairs,” he added” (Lee-Brago & Mendez, 2017).

“In a text message forwarded by Presidential Adviser on the Peace Process Jesus Dureza, Dominguez said Duterte “approved the recommendation not to accept the EU’s offer of a grant (of) about $280 million which would involve review of our adherence to the rule of law. That specific grant is considered interference in our internal affairs.” (CNN Philippines Staff, 2017)

So the Philippines authorities was thinking instead of being slapped and humiliated by Europeans donors and their grants. They would cut it off and not accept the donations to the projects. As the possible condemnation of the Police Brutality and Drug-War would assault the works done to create more peaceful atmosphere for the citizens. This is how it can seen, as the Philippines and their President Duterte, also has a closer relationship with ASEAN and China than before. They are also more key allies than the Europeans. They are also not putting to much strains in the relationship and saying how the government of Manila are supposed to work.

The preempt strike is because the Duterte administration want space and wants to make sure their respected. Maybe, the European Union are not used, neither is the United States. But they are not someones to toy around with and show-off. The Philippines and their government deserves credit for pulling their strings and stopping from being muffled with. Many doesn’t have the courage and the pride of the Republic.

No-one would expected this as the Philippines has usual just accepted the donation and the grants with the decided perks it had, since they had too. But now the Chinese and other friends are helping the Republic out with infrastructure grants and other development projects. They are certainly not questioning the will of internal security or stopping the strong administration of Duterte. They are accepting it and also being cordial about it. One thing no-one should do, is to underestimate the President and his will. It might seem rough and might seem strange. But not all is humble subjects of other nations, and that is refreshing, as Duterte administration actually stands-up to the ones no-one anticipated.

This isn’t a new morning, but still time to smell the coffee. Peace.