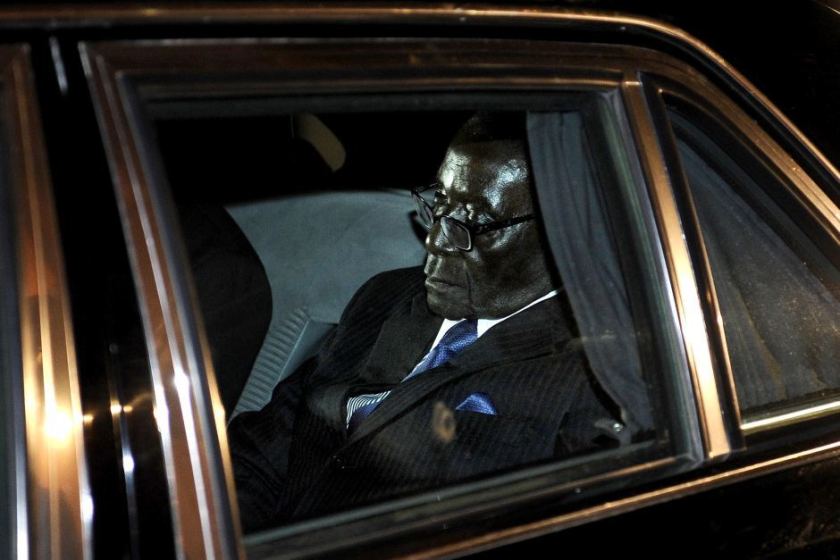 “Some people talk in their sleep. Lecturers talk while other people sleep” – Albert Camus

President Robert Mugabe really have loyal cadres and a ZANU-PF elite who deny the real fact about their leader. That President are old and weaker now is expected, Robert Mugabe is 93 years old. He has ruled the Republic for decades upon end without any relief or any plans for successor. Someone has said in recent times that he will gain the votes, even when he is dead. Another fellow ZANU-PF did say that he was biblical and his reign was written in bible. So the despotic and belief in the old-man has gone to far. As today’s defense of his sleeping in international conference and when visiting dignitaries abroad. Just read the statement!

“It has to do with his eyes and often I have felt very, very pained. In fact, I feel like a failure when there is this reading that the President is sleeping in conferences, NO. At 93, there is something that happens to the eyes and the President cannot suffer bright lights. If you look at his poise, he looks down, avoids direct lighting. In the case of Mandela, if you remember, you were not allowed to even use flashes whenever he was in the room. That is what happens at 93 and Mandela, I do not think lived as long as the President did. Let us disabuse ourselves” (Maveriq, 2017).

We all know that President Mugabe doesn’t care about anyone’s opinions, since he has his own ideas, where he defends his records and supposed achievements. Because it now overshadow that falls asleep during Press Conference with Shinzo Abe, at a conference in Kenya reported falling asleep 11 times, at the 60th Independence Parade in Ghana, at the inauguration of President Buhari in Nigeria and latest in South Africa at the World Economic Forum there. So there are many times he has fallen asleep. The old tyrant, who has grabbed power and never let go. He is tired of the international gatherings and public appearances, his aging body cannot cope with it. Even if he is biblical and will get votes after death, he apparently, can fall asleep.

He should bow down to the sleep, rest and give the helm to someone else. Who actually is awake and caring about the Republic. Not only eating the state resources, emptying the state reserves and spending on the ZANU-PF. There is a need of good governance and someone that actually feel they need deliver public services and safe government institutions. So that the state can deliver public goods and the welfare they need. Not the sleeping beauty!

Sleeping is for tired and weak, President Mugabe has done his deal and done his part, long time ago! Therefore, the fatigue and sleep is needed. Someone else should represent the great republic of Zimbabwe. A man or woman who will fight for the people and their plights. Not the ones who eats of the state reserves and state resources for their own gain. That is what the ZANU-PF has done and will be their legacy. Not that President Mugabe falls asleep abroad and makes a bad figure.

That shouldn’t worry the world, what should worry us all, is the efforts and the plans of what comes next. What is the steps ahead and what will be left behind after the sleeping executive leaves the scene. President Mugabe is 93 years old, all of draconian laws, the fragile institutions and the misuse of power, all stems to his reign. The sleeping abroad at conferences and press briefings are only proof, that he should retire and give in. But the ZANU-PF will not let that happen, nor his elite. Peace.

Maveriq – ‘President Mugabe does not sleep at conferences, he will be avoiding bright lights says Charamba’ (11.05.2017) link: http://www.pindula.co.zw/news/2017/05/11/president-mugabe-does-not-sleep-at-conferences-he-will-be-avoiding-bright-lights-says-charamba/#.WRRws9KGPIU