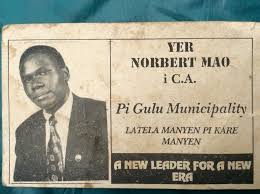 “You purport to take a disciplinary action against Hon. Mp Bakireke Nambooze, a senior member of the party, without even according her the inalienable right to a fair hearing!!! I thought my brother, Hon. Norbert Mao, could do better than that!” – Erias Lukwago (20.04.2017)

The Democratic Party of Uganda must be weak party at the moment, when DP Buganda Member of Parliament Betty Nambooze. She was today suspended from the party leadership and National Executive Committee. They took her place away and her seat in the DP NEC. You know the party is weak, when the DP Legal Sam Muyizi also left the meeting after she was suspended for three months.

That she was suspended for holding a Buganda Caucus meeting that was also stopped by the Police Force during March 2017. This just shows what sort of party the DP has become. They have a Minister in the giant Museveni cabinet, they got another loyal man to Museveni put into the EALA and Mao has himself professed to be talking to the President. Real proof that the DP isn’t really opposition, but nearly integrated into the NRM.

The DP under Norbet Mao are now not only in dialogue but working directly with the NRM. If they we’re then they would accept that Hon. Nambooze tried to visit Stella Nyanzi, that she tried to have principal politics and work out to fix the difference between Museveni’s claim for “Good DP” and “Bad DP”. Certainly, Nambooze must be “Bad DP” as the “Good DP” are suspending her. They have such little spines.

The DP under this current leadership should just fold themselves into the NRM and become a official branch under the NRM-O, why not just co-operate with NRM Secretary General Justine Lumumba, so their acts and their vision can be alike. Than the “Bad DP” can form their new party and become a real opposition. If not they can go into parties that are really against the NRM regime and their rule.

The DP is really bad, not “Bad DP”, it is tragic DP… the Party of Dr. Paul Ssemogerere has become this settled with the state and the NRM. That the President now can control the “Good DP” to such a move and take away the independence of the party. The initial result is the proof of the suspension of the place in the leadership.

This is not settling the issues within the DP, as her popularity isn’t going down, her popularity has been soaring. So today’s disciplinary committee was striking and certainly capable of voting in grandeur for her suspension. 22 for it and 1-2 absentee today at the vote.

What is striking is the words of Doreen Nyanjura on March 29 2017: “What exactly is wrong with Betty Nambooze calling for a consultative meeting in her area of jurisdiction, she is the Deputy President in charge of Buganda Region. DP in full is Democratic Party! The ‘Democratic Party’ can’t allow it’s leaders to hold meetings in their constituencies! N’way I should leave things of DP to DP” (Nyanjura, Doreen, 29.03.2017).

So the “Bad DP” did something bad, she convened a caucus meeting in her constituency. That a Buganda MP and Buganda Deputy President couldn’t hold a meeting to find a plan forward. So because of that move and the Police Force was also stopping it. Therefore, the people know now the real DP, the tragic DP and the not-so-democratic party under control of Norbert Mao.

Norbert Mao and his NEC is now no different than the NRM, they smells the same and acts alike. They are even working together, when they can. DP Mao are certainly settling for little trade that gives him little space, as his own MP’s cannot act without his blessing. If they try to act they have to do it on his command now. And Mao has to wait on Museveni as well…

This is the price for being a Good DP! Peace.