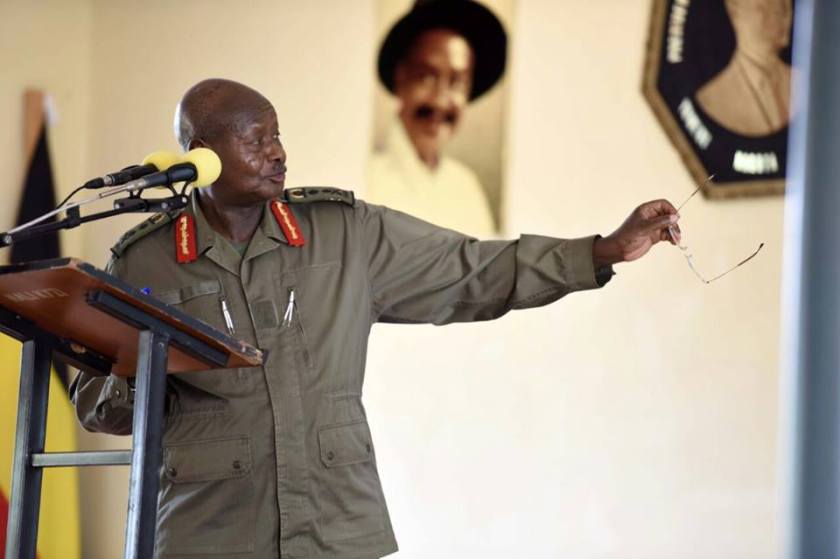 If you ever needed proof that the departments, ministries and institutions don’t have values in Uganda, than you need the newest revelation. President Yoweri Kaguta Museveni of the National Resistance Movement (NRM), who has run the nation for over three decades. This is proven with the Presidential Handshakes, the growing amounts of MP’s, Ministers and of newly created districts and sub-counties. That sort of government both state-wise and locally has grown out of proportions, this to make it possible to have enough cronies close by and hire them. The government has been built around President Museveni, still he has to control it even more. Take a look!

“President Museveni has ordered ministries to stop declaring state of emergencies without his prior approval of their messages to the public. He accused government officials of using loose words which have ended up scaring away potential investors and tourists. President Museveni voiced his concerns in a letter he wrote to the Vice President and copied to all permanent secretaries of all ministries on January 20, this year” (Ahimbisibwe, 2017).

So the controlling behavior of President Museveni, now is to another level since he cannot even trust that the message spread by his ministers are sound enough. He is now controlling the releases of information and vouch for the ones spread from the NRM. The Government is so controlled by him, that it all has to pass by him. Because his rubber-stamp has now to be on the messages.

That the President needs clearance and cannot trust in his ministers, not the agencies or state institutions, proves the lack of transparency, as even the messages has to pass by him before the public gets to know. If it is first in emergencies, than it will on the Presidents desk and he will rewrite it, so that it fits his understanding of it. So if it needs to be addressed as enclave, a colonial relic or even if it is climate change, the President has to speak his peace.

That the Police Force, the Army or any of the ministers can address the matters first in public, to regain trust or even try to amend in the emergency that arrived. That the President shouldn’t have the capacity to control each and every single message the government spreads out. Surely, the President cannot have capacity to follow Hon. Frank Tumbewaze or Uganda Media Centre Chairman Ofwono Opondo’s remarks on the matters. As much as the President cannot have the time or the ability to understand the different events that occur in the Republic.

This here proves that President Museveni only trust himself and no-one else, all his vision has to be spread and people have to believe him. President Museveni wants to control it all and not give way, it is all him and his behavior. Not like Museveni wants to trust anyone. They are only around for Presidential Handshake’s and Brown Envelopes, that is because they follow his system. They know if they stay around and needs it, he will help them out and also create needed jobs for the closest associates.

President Museveni proves with this what we have known for long, that the institutions and the ministries is shell-organizations for the supposed operations of the state. Museveni has to be informed and engaged before actions happens. If it doesn’t happen that way, it is the wrong way and his feels betrayed by his own. Therefore, the ones that falls stopped informing and being independent of their master. Which is Museveni, who feels he is more important than the institutions. Museveni thinks he is the pillar of the State and the key to all the works of the State.

That is why the newest order of controlling information and the flow of information to the public, the enforcement of this proves the systematic control that he has from the Okello House. This proves how belittling the state is and how important the President thinks of himself. The way the State is now his playground and no-one else can play like he do. Peace.