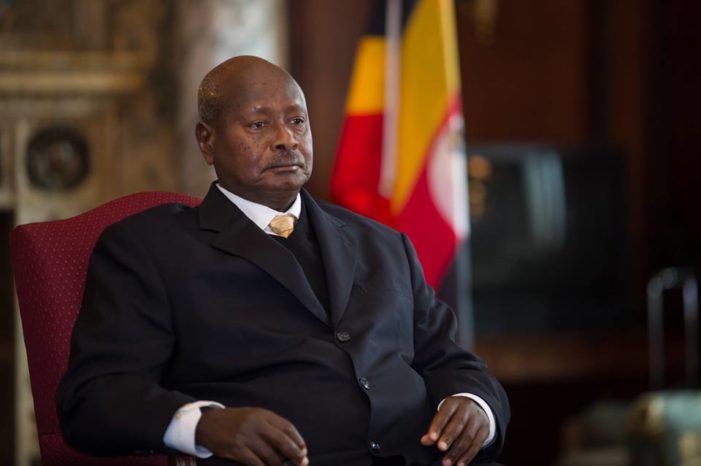 Since the 1986 overthrow of the Second Obote government and the ones that we’re running the government in the midst of civil war, President Yoweri Kaguta Museveni and his NRA came into power with guns and glamour. That has since then turned the power and eaten all of the state coffers. This has lead to many fallen soldiers, foreign affairs squabbles and foreign adventures of both mercenaries, armies and hired guns for other regents. The latest is sending battalions to the Equatorial Guinea on the merry of President Teodoro Obiang.

At this junction in 2017, there are talk of Age-Limit bill and ruling for life, like it matters. Like it is a viable concept and the truth to aspire to. That President Museveni been a wise man and used force, with brutal masterminding the escape from being one of the heroes of Obote’s return through FRONASA and into his own rebellion (NRA). Show’s the lack of integrity and will to sustain power by any means. Therefore, laws can be amended and adjusted to fit the paradigm of Museveni. That is the harsh realities of Uganda today, that laws are made to fit the ideas of Museveni and not of what could be the best for Ugandan prosperity. We could wish otherwise, but saying so is a lie!

In 1995 after 10 years in transitional government and one-party rule, as the former rebellious outfit and winners, made a pact with the people and such gave the President Museveni a legitimate rule. He gave a more honest and grander promise with a Constitution that even told the people how much longer he could rule, which the Article 105(2) said: “A person shall not be elected under this Constitution to hold office as President for more than two terms as prescribed by this article” (Constitution of 1995, 8 October 1995).

So after already been in power about 10 years, he was amending so he could legally rule another decade, the rebel and the former Defense Minister proved his skills of trading his water to gain more trust. Therefore, still at this time he was seen as a hero, even if he wasn’t believing in Multi-Party Democracy or in anything else then the Movement System and the National Resistance Movement own agenda that worked after his drum.

Even as deflections and decay of power came and the added promises of 10 Points Program and others, should have showed that the President had limits to his will to give to the public. The promises of wealth, of welfare and of educated citizenship was a pipe-dream. It sounded splendid in the woods, but when the gravy-train hit the State House, when the cronyism and family matters into the government, than the promises while carrying guns dwindled away.

President Museveni and the NRM, only gave the public Multi-Party democracy because the people voted for it twice, and with that in mind, the Constitution of 1995 had to be amended. The 2005 Amendments we’re also made so legally the President could stand again, as the 105(2) of 2005 states:

“A person may be elected under this Constitution to hold office as President for one or more terms as prescribed by this article” (THE CONSTITUTION (AMENDMENT)ACT, 2005, 30th September 2005).

This was just done in the nick of time before the 2006 election, so he could have his official 3 term, even as he had ruled for 20 years by then. Before could go-on without anyone stopping him. The President amended not the laws for the betterment of the republic, but for his own greed for power. That people find it insulting to now have the age-limit discussion, has forgotten the path to power and the way the President used people to gain what he has today.

President Museveni has used anyone’s skill and anyone’s possibilities to his advantage, that he has has done since he left the University, since he joined the second Obote government. Therefore,

“I teach [but not] about those things like age limit and I don’t know what – all those small topics of yours. I talk about the future of Africa. What should be done, not who. Because for you, you spend all the time on the who, the who, the who. For me, my issue is [the] what. So, because the age limit is; you are talking about the who now. NRM is not an anarchy group. Right now, am concentrating on alleviating poverty. That is my mission now. After poverty then we shall talk about those other topics that you are interested in” (The Observer – ‘President Museveni told journalists at Kawumu State Lodge in Luweero district yesterday’, 22.03.2017).

However, we have to talk about who and in particular Museveni, who has imposed himself on the citizens of Uganda for decades upon end. That is because he used all sorts or tactics and thinks people are stupid, as the NRM Kyankwanzi Conference of 2016 we’re working on ditching the age-limit, so that the President can be older than 75 years old. So that the current President can run again and be over 75 years.

Those who wants to be duped by the old man and live in ignorance. President Museveni, who has used all sorts of tactics to overstay, by both force and also laws. This has now been done over decades and by all means he will not leave. He will continue to use the Ugandan citizens as pawns, as he stays the king. He turns slowly tries to out maneuver the next of kin or the next Besigye. Since Museveni only believes in his vision, nobody else. Therefore, Museveni will not act differently, he will be more of the same.

There isn’t anything in his past that shows otherwise, unless your ignorant and is a Musevenist. Peace.