Zuma’s #SONA17 another spectacle of cold-blooded ANC with blatant disregard of the National Assembly and its Constitution! 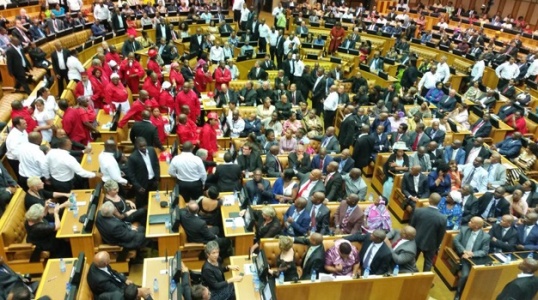 Now that a few days have gone by and mind is put to the rest, the State of the Nation Address 2017 #SONA2017 of South Africa been held in the National Assembly and the dust have settled. We can still wonder if this was the outcome and the wished legacy that the African National Congress (ANC) wanted to leave behind. The speech of President Jacob Zuma will not be the important matter after the national tragedy; even the Greek legends couldn’t have created a masterpiece of this proportion.

Economic Freedom Fighters (EFF) under Julius Malema or the Democratic Alliance (DA) under Mmusi Maimane couldn’t have wished for better audience to show the neglect and lost space under President Zuma. President Zuma has forgotten his heritage and what he carries with his position. Zuma is living on laurels of others, but not honouring it, instead he and his allies are eating of it. They are eating so heavy that all meat is scratched off the bone and digested.

Even The Congress of the People (Cope) leader Mosiuoa Lekota wouldn’t have thought this would go this far, even the so the South African Communist Party (SACP) Blade Nzimande must think that the freedom fighting days of ANC and wish for a equal distribution of goods and wealth is long dead in the ruling party. If it was so the ANC would not enrichen their elite and new-wealthy men and woman who loyally are eating of the government plate; instead of building progressive and clear-cut initiative to create work for a broader base of the citizens. Those days are long gone and forgotten after the term of Thabo Mbeki. 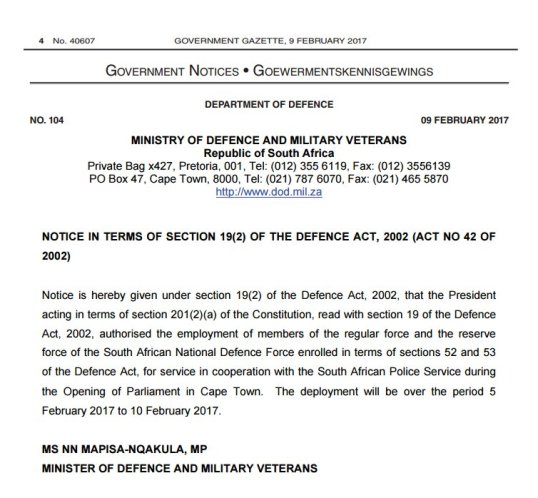 Zuma had to bring the National Army into the chambers where the speech of the president was about to happen, as much as the Police Officers presences on the streets was like a lock-down from the get-go. Like Zuma was preparing for a show of brutal force and not a honouring the Parliament and its constitution. Not like he has respected before, he has only had eager for power and not for running it for a common good. That MP Mapisa Nqakula needed to gazette legality on the 9th February to make sure the public of legality of having the army in the Parliament between 5th to 10th February. Zuma has many loyal servants that honour him instead of the constitution. Nevertheless, that is just a floosy disgusting paper right, aye?

No matter if an ANC MP created a fuzz with words and the ANC Parliamentary Speaker Baleka Mbete would have been Nobel in his approach. Instead of dialogue or even giving space, he expected to be a loyal servant only to Zuma and not to the rule of law. There are not many who doubt where the loyalty of Mbete lays, not with the codes of the sacred chambers of Parliament, but instead with the man who is the executive of the Republic. ANC has certainly forgotten their roots and their mission, the quests and their direction as a political movement.

What even more insulting after the violence of removing EFF and the DA walking out of the Parliament as a result of the misbehaving ANC MPs, the ones left behind started to sleep when President Zuma was addressing them. Well, there wasn’t anything serious left other than empty tin-box lies and deceit from the man-in-charge. Who has no scruples and no mercy for his opposition!

Zuma will now not tango with his enemy or even try to shadow play with the opposition, as the local election we’re insulting to the ANC and their ruling regime, that they lost important towns and places they have never seen others having mayors and local governments post-apartheid. That is the estate and the cracking into the party organization and the strain the chaos of corruption has left behind under Zuma. Something that not a puzzle of magic wand or public display can change, the heartbeat and the pulse is out of whack. 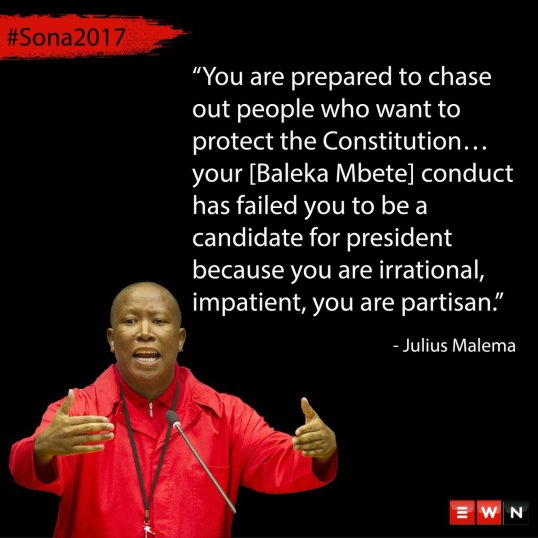 Zuma and his cronyism aren’t benefiting anyone nearly except his men and woman. The rest are left behind and on unknown terms as the leadership of ANC skates by with no concern of their reputation or their legislation. The procedures and their neglect of the value of institutions or government companies are proven with the delayed 2015 report on Eskom, that we’re released the day after Sona17, because ANC wanted another scandal than this one in the news.

Zuma wanted to be released from fatigue and disgusted with the sleeping MPs and the attacking opposition. He wanted to be claimed to be corrupt and neglect of his role as executive of holding the report behind locked doors. Just like he wanted to silence the Capture of the State report, but that one became a hot-potato he couldn’t keep in the archives until it was meaningless.

Now the SONA17 have put a new giant stain on the ANC, the Zuma administration and the National Assembly that prefers defending the Executive or defending the rule of law. As some say the constitution and the laws that built the Republic of South Africa. They doesn’t matter for Zuma or his cronies, but it means something to ones living in KwaZulu-Natal, the Orange State or anywhere else in the republic. Peace.