Mwenda, Andrew Mwenda the Independent Magazine owner and editor, the man who knows all about how to rant against fellow political opponents, than a month later praising them, like they are the next one to save the world. In one week Museveni can be the worst and the other week he will be the hero. The same is with the Forum for Democratic Change and Dr. Kizza Besigye, all through December 2016 and this beginning 2017 his focus has been bashing on Besigye like he is AIDS.

Mwenda has a fetish or worse a deluded mind where he uses all kind of words to address why Besigye isn’t the President, without considering the fact of the power of ‘the old man with the hat’. The editor rant is about the organizations, the loss of local elections and the losing of presidential election going back to Dr. Paul Ssemogerere of the Democratic Party who ran against President Museveni and all of his campaign we’re filled with attacks and brutality. Just like all of Besigye’s has been, it is a reason why he is for the second time in his life-time charged with treason against the Republic. All of those explanations vanish like water meet the heat of the sun and becomes part of the air.

Mwenda’s rants concluded with today’s word calling FDC a Cult on Facebook. Where he was calling literally Besigye a Cult leader, because Mwenda has to grind out every little bit of anger into the public sphere. He added videos of the inauguration of Nana Addo in Accra where Besigye we’re invited, Mwenda had this to say about the Ghanaian President speech: “In these two videos, newly elected Ghanaian president, who invited FDC cult leader to his inauguration, parrots the inaugural speeches of Bill Clinton in 1993 and George Bush in 2001. Besigye’s 2010 manifesto copied David Cameron’s Conservative Party manifesto almost word for word” (Mwenda, 08.01.2016). So his words are saying itself how he has to attack the man for attending and being invited while Museveni is busy bodying himself to drop “Presidential Handshakes”.

Earlier in the day he wrote this too against Besigye: “Most of the FDC leaders i have interviewed ran away from NRM after witnessing the same trend. Now they say that compared to Besigye and his FDC fanatics, M7 and his NRM look like the best democrats one can find. In short Besigye had established a ruthless and intolerant dictatorship over the FDC and now relies on the cult of personality rather than on institutions to govern” (…) “While Besigye fanatics claim I have been hired by NRM to tarnish the name of their cult leader, the information I post here is always supplied to me by the top ranking members of FDC who want to rescue the party and Uganda’s democracy from the tyranny of extremism and the despotism of Besigye” (Mwenda, 08.01.2017).

So he continues his rants, his words of direct attack, as there are rare breed and the Besigye is giant problem. Besigye is the reason for the losses; Besigye is the reason for everything. If it rains it’s Besigye, if it snows it is Beisgye, if it is wind it is Besigye and if it is sun by all means it is Besigye. That is how you can talk in the sense of Mwenda. He is the weatherman who always will pin the blame on Besigye, and by all current codex or modus operandi it will be boiled down to Besigye. Nobody else, the others are needed props in tale of fatigue, lacking organization or even repeatedly popular personality of Besigye. Instead of asking why was there yet again Primary Elections where Besigye won over Gen. Mugish Muntu. Something that didn’t happen in the Movement, where Museveni where sole-candidacy for Presidency and Mbabazi wasn’t allowed to run against him! Something that Mwenda wouldn’t mention, for one simple reason, it will blow his mind and lose his marbles. Mwenda will be little prick who thinks he is a genius, but misses key aspects of matter. Like you need water or milk to drink tea. You can try to boil coke, but the tea will not mix well, but boiled milk or water will make a perfect blend.

Mwenda’s rants are now pointless and personal, like vendetta against the FDC and Besigye. Like he has to attack them! He cannot do anything else, if not he loses his mind. I know I write against Museveni a lot too, but usually with context of economy or recent acts, but Mwenda recreate the election and the internal organization of FDC without caring about factors that are put into play with no regard of the political status in the Republic. FDC are not alone on the losing end of Movement, but Mwenda acts like they are the only one, there is UPC, DP, Farmer’s Party, TIC, UFA and so on. 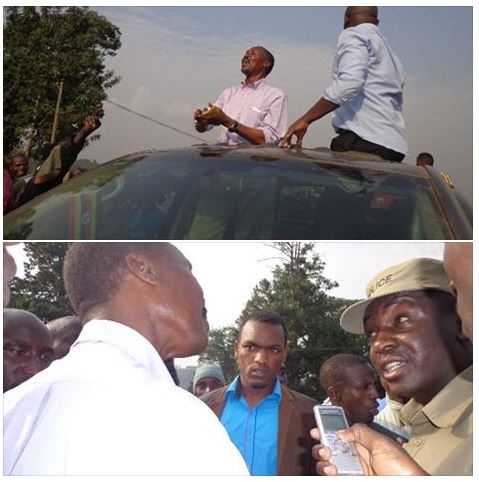 Like yesterday’s rant: “Besigye die hards are either cowards or hypocrites or both. While they make the loudest noise on how they are ready to die for him, they have done nothing (except for insulting critics on social media) to prove they are worthy of their claims. Each time Besigye goes to town, Kale Kayihura sends only eight (8) police men who pick Besigye like chicken, bundle him over a pickup truck and take him to police as these “ready-die-for-our-man” fanatics watch helplessly” (Mwenda, 07.01.2017).

He goes again into insults not only Besigye, but his supporters, because what else there to do. Because he doesn’t have a valid argument as long as he is putting FDC and Besigye in vacuum, the same kind of empty hole his arguments and reasoning is for the moment. 2017 stroke Mwenda and his mind went haywire. To prove the nonsense of this man, let’s take a piece of the rant of the day before:

“Over the last 16 years, Besigye has concentrated all the meager resources of the opposition on one singular objective, to capture the presidency. Yet we all know that maintaining the presidency is the most important objective of M7 and the NRM where he has concentrated most of his resources” (…) “Now FDC is much weaker relative to NRM. Not only that. NRM is also backed by the power of the state. By concentrating all opposition resources to attack NRM at its most fortified position, Besigye has expended his meager resources to secure an objective where he has the least chance of success. This is a strategic blunder” (Mwenda, 06.01.2017).

The relative argument itself is disgusting, because even if NRM is a ordinary party as Mwenda make it seems, it still is freighting how little he consider how the ambitions are under siege in the NRM, therefore handpicked and rigged members are becoming leaders, but that part of the argument is lost on Mwenda. Because that makes NRM more fragile than Mwenda wants to say. As well as the FDC primary model is better than NRM, though not perfect it still are more democratic than NRM ever will be. Another reason why the debate of Muntu and Besigye in the FDC are a valid one, directly opposite in the NRM where there is no discussion if VP Edward Ssekandi or PM Rukhana Ruganda will ever challenge Museveni. But that is a silent and a mute-point. If doing so your devaluing the epitome of all Ugandan wishes is to have Museveni for life as the chairman of the Movement and Executive of the Republic. Another thing, Mwenda doesn’t have the balls to connects when taking in consideration the stalemate in FDC and in other parties. In a state where it isn’t really democratic, in the sense that NRM are rigging when needed to control the Parliament and all other political offices in the country. The rest is just a front. Strange that Mwenda cannot mention that either. But that is another illness, that his eyes looks away from.

The flawed and the lost plot, is why all of sudden has went into mayhem and going all in to attack FDC and Besigye, Mwenda seems like only dreaming and thinking about them. That is the only thing that boggles his precious minds and the only discussion he can have in the Independent Magazine, as the other obstacles of the Republic can be redundant.  Peace.