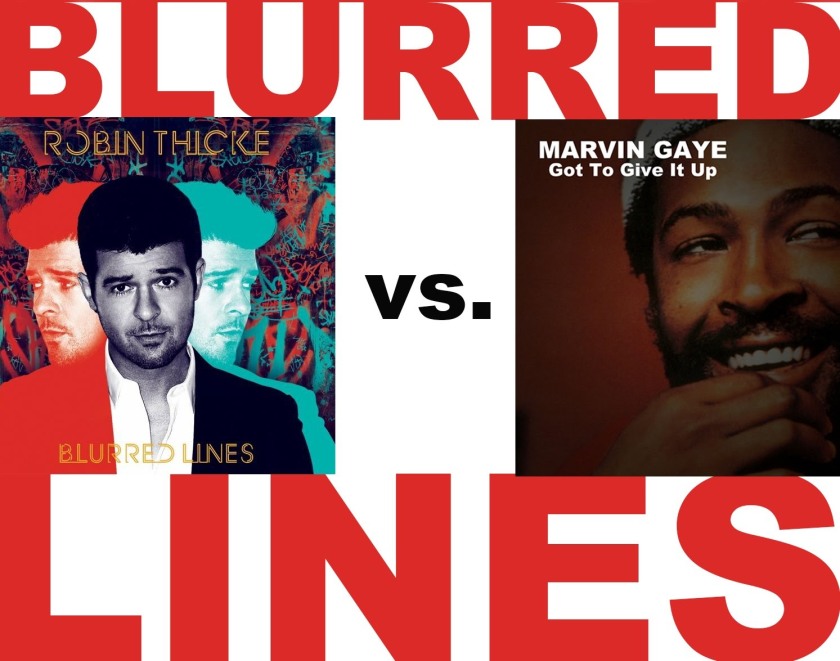 Well, Copyright infringement is a tricky thing, especially with something as soft as sound and audio. That musicians are taking each other’s vibes and play into their own creations isn’t new. The music is inspired and often in modern popular music they sample music that the composer together with producers pays for licencing. One of the most popular in my time we’re when Jay-Z and Dame Dash got the rights to use Annie Sample on Hard Knock Life:

“Jay-Z gained permission to use the “Hard Knock Life” sample by writing a letter to the musical’s composer Charles Strouse and lyricist Martin Charnin expounding on his childhood love of the show, having won a ticket to see it on Broadway as a prize in an essay-writing competition at his hard-knock Bedford-Stuyvesant school. The letter was, he later admitted, an “exaggeration”. In fact the rapper came across the hip-hop version, by producer Mark “the 45 King” James, at a rap show and bought it for a rumoured $10,000” (Ludovic Hunter-Tilney, 2015).

What was done in Jay-Z famous single for the ‘Hard Knock Life’ he got permission and also seek to gain permission to use the sample of the song in his own creation. Something that even wasn’t in mind between the parties in the litigation between Marvin Gaye’s estate and the Thicke Parties; as the Copyright infringement case that been running ever since the “Blurred Lines” became a hit in 2013. This was now a concluded case in the courts on the 22nd December 2016. Where the judgement and the jury came to a verdict where the Thicke Parties we’re at fault as per explained underneath. That both musical specialist and legal experts denies the claims of the Thicke’s as they does not see it as coincidence that “Blurred Lines” sounds so similar to “Give To Give It Up” by Marvin Gaye.

“In 1976, Motown legend Marvin Gaye composed and recorded in studio his #1 dance and funk hit “Got To Give It Up” (“Give”). ER2238. The song, dubbed by Oprah Winfrey the greatest dance song ever, has endured for the forty years since it was created. SER856. In early 2013, Pharrell Williams and Robin Thicke discussed writing a new song. See SER856, SER858. In multiple public statements they were candid about the fact that Give and Marvin Gaye were at the top of their minds in creating their song “Blurred Lines” (“Blurred”)” (United States Court of Appeals, P: 17, 2016).

“The amicus brief strays far outside the record, makes unsupported generalization about the music at issue, and is apparently uninformed by the actual trial testimony, including the fact that Williams and Thicke disavowed the idea that they wished to create an “homage” to Marvin Gaye. It also bears mentioning that of the 212 signatories to that brief, several are not “songwriters, composers, musicians, [or] producers” at all, but rather music business executives such as talent managers, attorneys, and other representatives. In addition, more than half (by our count, based on public information) are either clients of the Thicke Parties’ trial counsel, have recorded or are credited on albums with Williams, or have another business relationship with one or more of the Thicke Parties. This web of connections is not disclosed in the amici’s statement of interest” (United States Court of Appeals, P: 22, 2016).

“Thicke made many similar statements in video and radio interviews, e.g., telling an interviewer that Give is “one of my favorite songs of all time, I went in [to the studio] and [said] ‘you know Pharrell I’d love to make something like this, you know feel like ‘Got to Give it Up’ and [Pharrell] started with the percussion you know trying to get that rhythm and then the song actually happened we did the whole record in about an hour.” (United States Court of Appeals, P: 27, 2016).

“Finell testified that nearly every one of the 130 bars of Blurred contains at least one of the elements of Give that appears in the lead sheet. ER666. The numerous common elements and the way they interrelated with each other created a “constellation” of similarities she found “stunning” and “highly unusual.” ER581–82. For example, the “heartbeat” of the song—the interlocking bass and keyboard—“drove each song.” ER559. She identified seven elements found in both Blurred and the lead sheet: the signature phrase, the hook, “Theme X,” the bass melody, the keyboard rhythms and chords, word painting, and the parlando/rap section” (United States Court of Appeals, P: 34, 2016). “[O]ut of the four notes from the Give hook and four notes from Blurred, three are identical in their scale degrees.” ER600-01. The hook of Give repeats 12 times within the lead sheet and the hook in Blurred repeats 14 times. ER602. The four-note hook melody in Give contains scale degrees 6- 1-2-1; the four-note hook melody in Blurred contains scale degrees 6-1-1-1. SER868-70. Finell also testified that the rhythmic placement is similar in that two of the notes are before and two are after the bar lines in each song“ (United States Court of Appeals, P: 36, 2016).

“In an attack on this testimony, ten musicologists have filed a brief that purports to start the analysis from scratch, with a very crabbed interpretation of the lead sheet and assertions unconstrained by the record or tested by any form of cross examination. App. Dkt. 20. To the extent it merits any consideration, this amicus brief at most shows that experts may regarding substantial similarity, creating a triable issue of fact” (United States Court of Appeals, P: 40, 2016).

“We will not second-guess the jury’s application of the intrinsic test.” Three Boys, 212 F.3d at 485. Regardless, the trial record here more than adequately supports the District Court’s conclusion that it “cannot be found, that the jury’s conclusion that the two works have intrinsic similarity was against the clear weight of the evidence.” ER29” (United States Court of Appeal, P: 79, 2016).

“The Gayes accepted the District Court’s remittitur of the jury’s award of $4 million in actual damages to $3,188,527.50 and its remittitur of the jury’s award of $1,610,455.31 in profits against Williams to $357,630.96” (United States Court of Appeal, P: 86 ,2016). “Based on her analysis applying industry custom and practice and her vast experience, Stern concluded the use of Give by Blurred would have resulted in a 50% licensing fee being granted to the Gayes if a license had been negotiated before release of Blurred” (United States Court of Appeal, P: 89, 2016).

“It is undisputed that Harris and the Interscope Parties were part of the chain of distribution for Blurred. This includes Harris’s role as a owner of the copyright who authorized the distribution. It follows that if Blurred infringed the Gayes’ copyright, which the jury found it, Harris and the Interscope Parties were liable as a matter of law” (United States Court of Appeal, P: 95, 2016).

“Here the jury’s award of actual damages and lost profits to the Gayes means the jury necessarily found that Blurred infringed the Gayes’ copyright. Only confusion as to which parties bore the responsibility for that infringement can explain its failure to find Harris and the Interscope Parties liable. The District Court reasonably concluded that failure to give an instruction clearly defining the scope of distributor liability caused the inconsistent verdicts, and that the verdicts could be corrected in a way that followed both the law and the jury’s intent” (United States Court of Appeal, P: 96,2016).

So one of the biggest producers of our times have got a verdict of copy infringement of used material in this case, use of a song from Marvin Gaye; which happen to create one of the biggest hits of 2013. Pharrell Williams as the Producer of the beat, Robin Thicke as the main singer and with feature of T.I. or Clifford Harris Jr. that we’re all part of the hit song. The one song that both Pharrell and Williams claimed to be inspired by Gaye, still the song after analysing and use of musical expertise show how similar the tracks are.

Later after the first litigations that lead to this and after first verdicts of copyright infringement he told the press this: “Thicke had a great answer for his GQ interview, telling the lawyer, “With all due respect, I was high and drunk every time I did an interview last year.” In fact, Thicke said, “Every day, I woke up, I would take a Vicodin to start the day and then I would fill up a water bottle with vodka and drink it before and during my interviews.” Robin says he’s now drug free, telling the Gaye family lawyer, “I’ve been sober for the last 2 months … When your wife leaves you, it gives you good reason to sober up.” (TMZ, 2014). So the musician now tries to deflect the facts of how they we’re inspired to make the track, now that the process we’re in action than he was a drinking and doped artist who didn’t know what he was saying. His lifestyle we’re blurry to take responsibility for the inspiration behind the blurred lines hit. Which is a beautiful feature, but doesn’t make the courts sing and dance; the evidence and the affidavits do.

So the verdict of the Ninth Circuit Court of California clearly followed the line of the musicians taking inspiration, we’re doing more than so and didn’t licence the rhymes and beat of the Marvin Gaye “Got To Give It Up” when making the “Blurred Lines”. If the guilty party who is under Thicke Parties had asked for permission and licenced by the Gaye’s estate like Recording Artist do all the time. They use their Recording Companies and their legal teams together with publishing agents who fix the use of a sample to create new songs. That shouldn’t be new for either party in the Thicke Party. Pharrell Williams, Robin Thicke and T.I. has all been on records that are sampled and has gotten permission to use parts of other tracks into making a new hit record.

The same could been done by the men behind “Blurred Lines” instead they tried to copy somebody else’s work without permission and without licence. If they had offered in advance 50% on royalty on sales the Recording of the hit song would been fine and fixed. Instead they wanted to legally battle the Gaye’s Estate. Something they righteously lost. Peace.