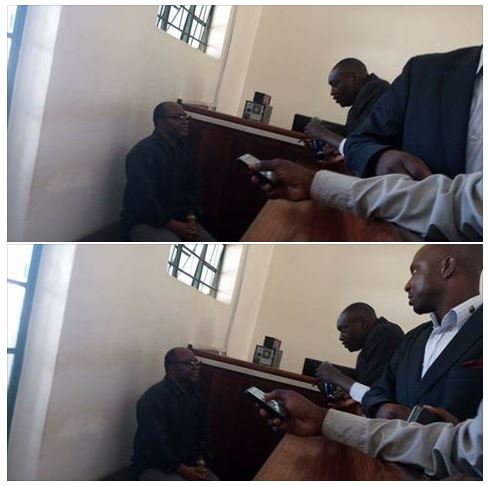 After 48 hours inside the dungeon of Nalufenya Prison, the Obusinga bwa Rwenzururu Charles Wesley Mumbere was appearing infront to Jinja Magistrate Court. Where the presiding judge on orders from above, had decided to put “treason” Charge on the man, who has lost his Royal Guards and his Palace in the matter of the recent weekend. With a bloodshed unleashed by the Special Force Command and Uganda People’s Defence Force.

The Rwenzori Kingdom in Kasese has gotten massive losses; the town of Kasese has seen a siege operation where the Army and Police had all intent of blazing the gates and storm the Palace without any consideration of life or mercy. The ones taken in as humiliated and with force. The king himself will be in costudy and in bracelets until 13th December as the case, which as procedure will be prolonged indefinitely and evidence will come forward in the working case of the Court. It have not produced anything yet other than the culprit, the others is at the Central Police Station of Kasese, the 140 guards who we are lucky not to be killed by the vicious army of the bloodthirsty soldiers.

We can all wonder what kind of message it sends, when eyewitnesses say that the weapons found in the palace are forged and the evidence placed there by the army who stormed the Palace after a brutal battle in Kabarole the day before. We can all question when the AIGP Andrew Felix Kaweesi saying that the king and his powers had built up and militia. While the first proof was an AK-47 and Pistol. That is less than President Museveni has besides his pillows at one of the Presidential locations across the Republic.

So I don’t trust the army or the Police that works in political and reality for the President, not for the security of the people, they will manufacture stories and make belief of any kind of reasoning and doubt beyond any mere fact to fix the outcome and tarnish the king. They got no other way to clear the air and clean their blood from their hands. Their already disregard for dialogue or touch with reality is what transpired into the bloodbath at the Palace in Kasese.

The one who happens to be in bracelets, Mumbere is the one needing safety by the state; he is the one that is sitting in the cell. The king with no Palace, no servants and no one to address his concern as the state can make anyone a terrorist and anyone can lose their freedom if it benefits the tyrant.

President Museveni has forgotten his people, his constitution and the reasons for his rebellion; if the rebellion was not anything else than an excuse all along for him to overthrow and gain all power. Something it seems by every day counting.

We can just wonder if the souls of Idi Amin and Milton Obote still roams the land and see their successor acts as vicious as they see, the liberator turned tyrant with swift force and with smiles and grins of allies in Libya and America. Now, the Libyan interference is gone, but the exported weaponry and battle training from the U.S. is still happening. These techniques are now used to get-rid of kingdom and their loyal subjects. With a force and authorities we did not think the masters of our day would ever be able to do, and that to their own. The own people, the own subjects and the citizens of its own country with no mercy and justification, therefore a manufactured court to save face for the killings just mere hours ago. Peace.