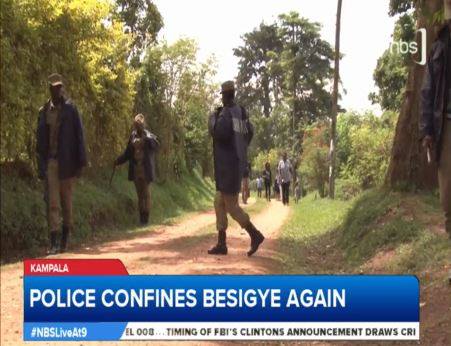 “Police have again taken over security outside Dr Kizza Besigye’s Kasangati home after a group of women blocked their access yesterday. The leader of the group said the police took over security early morning” (NBS TV Uganda, 30.10.2016).

Again the Police Force has taken the home of Dr. Kizza Besigye under siege, as he had 12 days abroad as per request and allowed to while the Government continues to work on forged allegations of treason. This continued war-path and destruction of liberty and freedom for the political leader and former presidential candidate.

This is a farce and continued presence of Police without warrant or charge on the man. The decision to house-arrest the man because of so-called intelligence of planned demonstrations with him together with comrade and loyal friend Lord Mayor Erias Lukwago in Kampala. As Hon. Beti Kamya continues to force vendors of the street and alleys while the streets are cleared with violent force of Police. That is the only thing the Police under IGP Kayihura knows anyway.

This is a continued injustice is just getting to far out of hand. I don’t know how many times I written about it, but the Penal Code and the Preventative Arrest, the Colonial Law inherited from the British have been now certainly used more by the NRM Regime, than the years under the British Lords. I am sure the record for most Preventative Arrest in Ugandan History is Dr. Kizza Besigye. That says more about the authorities than of the so-called illegal activity of Besigye. Besigye is soon not allowed to think or breathe; as no matter what he does he get detained, arrested and such.

Just like Doreen Nyanjura has been detained and arrested, even tortured and not allowed food from the Police Officers at the prison. That shows the level of impunity as she just tried together with other woman that their leader should have justice and freedom as anybody else.

I am tired of the political police force and their misuse of power against civilians, political persons and others are easily picked without charges or cases to be made. That proves that injustice bounces over rule of law. Again, Again and Again! Peace.