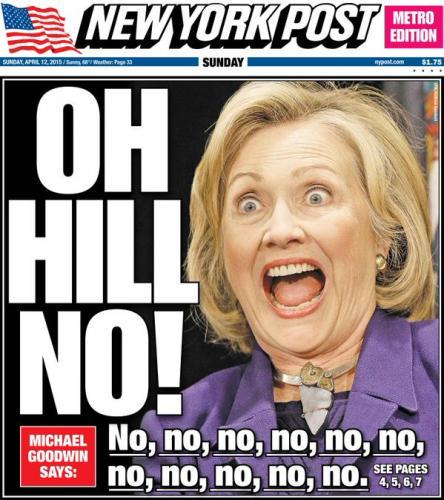 Another day, another E-Mail leak from the inside of the Hillary Clinton for President 2016. This is mails leaked from the John Podesta files of WikiLeaks. This proves again their relationship with the corporate media that shows what they belief in and who they believe in. This here is just a taste of the leaks, as there are so many dropped every-day that there surely more stories that could been told.

Here today, we can see how the HRC campaign banter about New York Times stories, how they asked for quotes to Politico and also the Hill and Time Magazine. They are asking it differently. Still, showing

“I am a reporter for TIME Magazine, and am working on a story about why Donald Trump bowed out of the 2012 presidential race. Would you, or any spokesperson for the Hilary campaign, be willing to be interviewed for the story? Let me know – there will of course be complete anonymity.  Best, Aditya to John Podesta” (Aditya Agrewa – ‘Subject: Interview for TIME Magazine’ (27.03.2015).

“They tried but could not confirm the politico story and then by day’s end yesterday, ODNI issued a statement saying the review was not done yet. Did I miss something or did they completely ignore the clapper matter and instead focus on another Grassley lead of an innocuous Teneo letter? I feel like a another public editor screed should be in the offing”. (Brian Fallon – ‘Subject: Re: We haven’t had a good war with NYT in awhile’ (07.11.2015).

Colum in the Hill:

“You should like it. I make a brief reference to her campaign going too negative in NH, hinting briefly it came from consultants, but otherwise it is 95% positive, mentions the WJC three minute video and her “imagine” speech as how she should proceed, says she has big dreams too and should tell America about them…. I did see a brief snippet on CNN that an unnamed aide is telling CNN that she is going to more aggressively negative against Bernie. I ignored that in my column but obviously believe that would be a big big mistake” (Brent Budowsky – ‘Subject: Re: Hillary column tomorrow’ 10.02.2016).

Getting Quotes to Politico:

“Hi John. Very nice talking to you the other day. A small request. Andrew Restuccia is writing about my departure for Monday, day of the announcement. He’d take a quote from you if you were able to email him something. If you’ve got time to do, his email address is ARestuccia@politico.com mailto:ARestuccia@politico.com Many thanks. Great day on Tuesday. Congrats. Talk soon” (SternTD sent mail to John Podesta: ‘Subject: quote for a story’ 18.03.2016).

This we’re what was from the Media, here was one important advice giving Hillary Clinton if she wanted to win this election:

“The Clintons too often use language that is for Washington insiders and not for the rest of us out here in America. With Trump attacking Pres. Clinton for allegations of infidelity, she should not respond with “he can make personal attacks” or suggest that this is what Republicans have always done. Instead, she should make this a VERY PERSONAL MOMENT. She is failing to connect with voters – in large part, I believe, because she uses Washington speak. She should not just be connecting with women voters in a better way, they should be energized in a big way. She’s failing in this regard. Dump the Washington political speak immediately – including partisan language. Replace it with words that average voters understand. When she talks about Trump or Cruz or other Republicans, she should attack them for their policies – not even mention that they are Republicans. I also believe she’s making a mistake by attacking Sanders in a personal way. People grew tired of this from the Clintons. It’s not what they want to see. GET A PERSONAL CONNECTION”  (Steve Hildebrand to Joel Beneson – ‘Subject: *Some unsolicited advice’ 16.01.2016).

In this election that is the grandest advice anyone could have given her. Steve Hildebrand gave her a good one and hope she sticks to it.

These leaks are not a good look, but compared to sexist and chauvinistic leaks of Trump, these are more tolerable and understandable, as Clinton tries to use the system in her advantage, though not ethical correct as she then turns into a prop in the Media instead of being scrutinized as the Politician she is and with the luggage she carries. Peace.