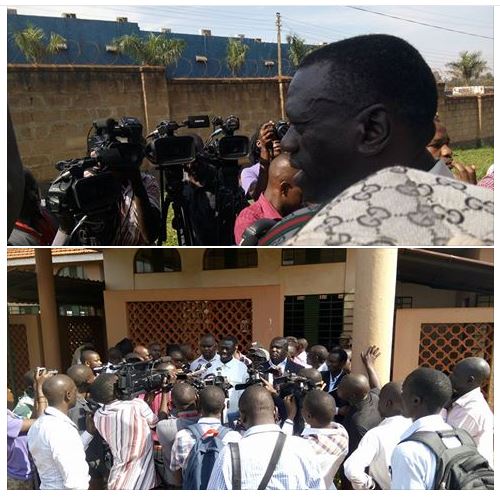 Just as we are talking today we’re in mid-October and the Presidential Election are already months away and the Treason charge continues to linger over the life Forum for Democratic Change Dr. Kizza Besigye. He had to today again had to pass out of his home in Kasangati, that has been besieged around the weekend and been detained without reason or charge during the Independence Day, he was that together with many of the FDC leaders and FDC Youth League who we’re captured like their we’re doing co-operated effort to directly undermine the authorities, instead of celebrating the Nation 54 years of Independence from the United Kingdom and their British Empire.

Well, let’s be clear that is not cool, no matter what excuse the poor excuse for a man called AIGP Andrew Felix Kaweesi displays of meagre character and use of laws that makes CP Fred Enaga into a legend of spin-control. That says more about the Police Force disposition as the carrier of rule of law and instead their work to institutionalize their oppressive behaviour against the Political Party and their Defiance Campaign.

Today as the Treason Charged man called Besigye we’re passing through from his homestead towards the Nakawa Court. He we’re blocked at Sheraton Hotel as the Police Force wouldn’t even let him answer to the call of a case that the DPP Mike Chibita hasn’t been able to carry out the collection of evidence or credible courtship for Besigye. The Treason Charge against Besigye we’re filed on the 13th May 2016 from the CID Headquarters of the Police Force, the noble man charging him we’re D/SSP Mark Odong. He must surely be remembered for signing of on this nonsense as the loyal muppet he is for the NRM Regime. Here are the words that Besigye said on the Court-Steps of Nakawa today!

”I am about to protest coming to this court, I will continue fulfilling my conditions of bail on the same case. When they are ready they will call. It’s been more than 5 months since o was arrested and there is still no case that they have to present against me”.
Again: Nakawa court adjourned the treason case to 16th November 2016. Postponing the case indefinite to make his life in the limbo and courting him like they have done for years for charges under the Walk to Work, even in Kabale Court, which still in 2016 is not yet finished or even sentencing on year upon end; the phony charges and court games are used to silence and stop the Opposition leader from having capacity to live normal and work as a political figure against Mzee. That is the plan all along.

Sorry, wange, sorry brother; it’s enough, your gig is up. Please stop the Mock-Courts, the Kangaroo Courts and the misuse of funds to save face. Wait, the Ugandan Government cannot get enough money to keep the upkeep of Makerere University Hospital or Electricity at times for Mulago Referral Hospital, while the President has funds to buy new Russian Helicopter to his expansive US aided army. Peace.