Besigye gets into trouble: because he waves at the crowd and goes to the Bank!

There is reports that the house of Besigye is barricaded again by Police Officers as he earlier in the day went down-town central Kampala Business District to the Crane Bank to surely just take out some money so he could pay for food and running expenses. Something every man and person needs. So the news that the Police used force and even took him away at the Clock Tower today in Kampala proves the un-necessary effort to stop Besigye in whatnot he does on his daily basis.

A Police Officer around the bank told him: “That he was not allowed to wave at the people”. Mr. Officer which law is your presiding over and who asshole gave you the order today? Was it IGP Kale Kayihura who called it procession and wanted it stop; so we can hear the new fake news from AIGP Andrew Felix Kaweesi who will speak his nonsense later tonight.

The Uganda Police Force and their laws have an apparent problem with Dr. Kizza Besigye, as they have with the Pro-Change Youths that are often detained at any point when Besigye wants to congregate. If not just stopping by their political figure and show respect to the man who speaks for the people and not for the feeding of the bank-accounts of Mzee.

Because the Police had to take him out of his into the famous van and drive him back to Kasangati, his home after the people we’re circulating his car. As they took him into the van, they used on of their Anti-Riot vehicles to tow his car to his home. They knew that Besigye lack money for gas at this point (joking by the way). Nevertheless, there are striking issues here! 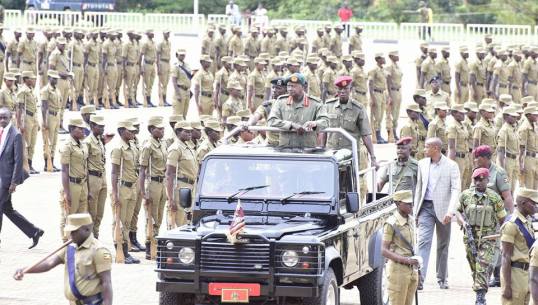 Only on today’s heroics of Besigye, the Police Force is reported to have spent 500m shillings on the charade of brilliant behaviour and brutality to silence the opposition leader and legitimate leader, the people’s president as President Museveni we’re busy parading yesterday his Police at Police Day (ironically) at Kololo Grounds; his favourite show-off of power and parading grounds as the shut-off area make it look like he has some sort of popularity. But in reality the people flock around Besigye and Museveni gets the last end of the stick.

This here proves the issuing problem that doesn’t go away, even if the Uganda Police Force besieged the home of Besigye; his support doesn’t dwindle away and his party doesn’t cease to exist. The certainty is that the Police Force and the Government cannot afford to continue the belittling of them in the pursuit of nonsense deteriorating the procedures and rule of law with their impunity towards the man. So Mzee and his cadres looks more and more foolish, more desperate and more weak as their tools are soon exhausted in their rally to demolish and trying with acts of fatigue towards Besigye.

The Police Force isn’t looking professional or acting so as they are using any opportunity to crash, to detain and arrest FDC Youth and Besigye. They cannot help themselves and their cadres for these vile attempts of creating peace, but instead creating violence. They are violating basic rights and acts of citizens to be out. Just as they we’re doing to fellow peers yesterday as over 50 Youths we’re captured by Police in Entebbe. 10 of them we’re taken from Makerere University. Moses Byamugyisha we’re today in Entebbe fighting all day and reported gotten 16 out of jail, but still many lingering without trial or court dates as the impunity are static. Just like the values of Crane Bank who cannot be sold without consent of the Museveni family. 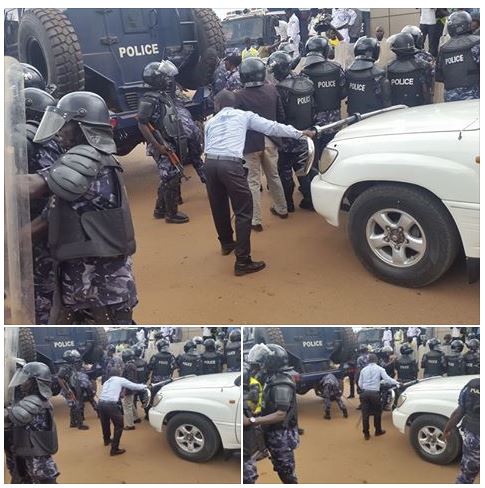 Let me be clear, as long as this prolongs the KEY QUESTION for the Police Force is: “Are Besigye a legit citizen?”, “Does Besigye have rights?” ;”Is Besigye allowed to have justice?”, “Are Besigye a man who can have the liberty to walk, work and live?”

These are basic for the Police because they do not care to what extent they steal and thief time and ordinary life from the man. The same Police who doesn’t care if they detain innocent civilians or even tear-gas a couple for the mock of it. The failure of righteous and equal law is now on the forefront as the violent and brutal Police has nothing to deliver or compensate their acts of vile snatching of freedoms. As they do to anybody who is a subject near the Political figure and stature of Besigye. That is something the Police and Government should know, and knows very well, but will not admit as the cowards they are!

It’s time ask, how much can the people see of this acts and this attempts of political prison of a single citizen without acting with peaceful demonstrations against the aggressors and sponsors of this thuggery? Peace.