There are certainly a crisis in Juba, as the escalated to old-days in the Capital of South Sudan. As the President Salva Kiir and VP Dr. Riek Machar have started to fight each other, as their trust level is beyond the reasonable level. There been dialogue and even negotiations between the old Generals; who has had different subject and loyalties to different tribes. Still the surge for power and generate it all. Is the reason why the President was offended by what the Editor-In-Chief Alfred Taban of South Sudan Tribune wrote on the 16th July 2016, as I have the copy of the article that he wrote and published! That apparently hurt the Executive who have been vigilant against the SPLM-IO Riek Machar and his loyal soldiers, as the Government forces have attacked the Opposition on their bases.

Still the newly fresh cease-fire, while the Government has even detained SPLM-IO MPs who was living in Hotels in Juba into jails after the recent skirmishes and attacks, proves the unstable situation and the little peace. This together with UNMISS staff leaving the capital, International Red Cross, Embassies and other foreign dignitaries, as well as Indian Army and Ugandan Army coming into Juba to clear the town.

We can expect in this unfree and unstable situation that the free press and liberty seems to also be under fire, but when you acting on the terms of State of Emergency. So that with even government forces go into the UN World Food Program warehouse and looted it. As there been reports over the last year of the lacking levels of food and fleeing from violence. The insecurity together with the now the proof of lacking freedoms, shows that the Troika’s faith in the newly formed Transitional Government of National Unity (TGNU) after the Peace Agreement of 2015, where the new National Assembly and Government should mend the wounds of the newest conflict between the leaders. That proven again when the President cannot handle being questioned by the media and their men with the pencil and thoughts into paper; this should be a worry as the soldiers are fighting and the disarray of society that are for grabs, by men more used to the battlefield then building the state. That should be reminder of the fragile state and the quest to build the newest African Nation, that the South Sudanese people deserves, with leaders who works continuously to achieve progress for the citizens; instead they are fighting for their own plate and not for the people, that should be a warning sign for the international community who supporters the development and continuation of the Kiir Government.

Take a look at the Article that made a fellow human-being detained as he wrote critically about the leadership of South Sudan: 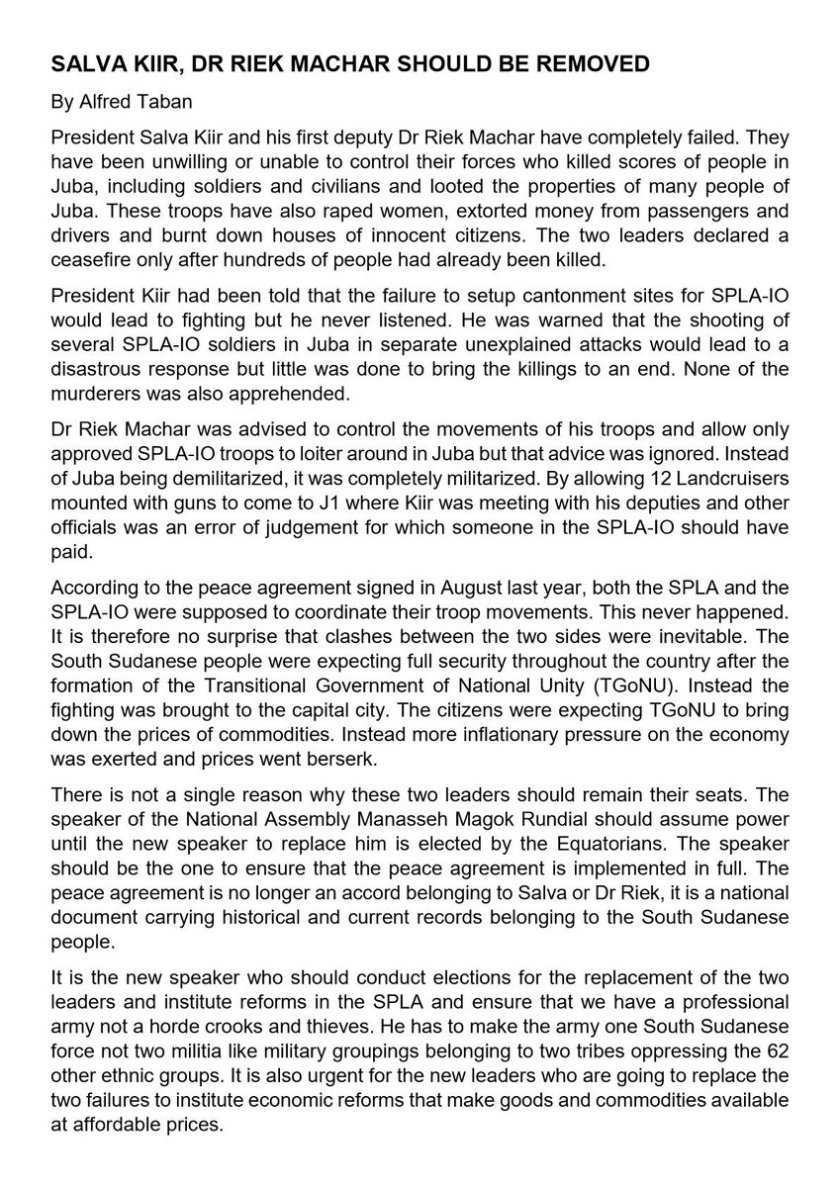